The IMDb Poll Board Users are very sad to hear that Sir Sean Connery passed away on 10/31/2020. Our condolences go to his wife and his family.

Before going into acting, Connery had many different jobs, such as a milkman, lorry driver, a laborer, and bodybuilder. At the age of 23 he had the chance to become a professional football player, but decided to join movie business. For his success as an actor, he was knighted by Queen Elisabeth II. on 06/05/2000 as a Knight Bachelor.

Sean Connery was versatile in many ways. Most of his characters were sympathetic lead characters, like his signature role as the MI6 scecret agent James Bond. His range was wide, one time he played an environment scientist, another time played a submarine captain or a monk. His tremendous strong and charismatic personality impressed & entertained the audiences for decades.

Please suggest in the form like the examples on the list. This time without mentioning the suggestors.

Thank you, Peter. I corrected it.

I'm sorry, I wrote this with tears in my eyes. This is a real bad year for me. I lost some people around me and now one of my favorite actors died, too. Afterwards, I will call 2020 the dark year.

I corrected it, thank you. Wasn't he been brought back from jail for the mission? So I wrote "former MI6 agent". I hope that fits.

I'm so sorry, Breu, that you have had such a bad year. My condolences for everyone that you have lost, including Connery. I hope that things brighten up considerably and soon.

Well, I never met Sean Connery in person or had personal contact. But he always impressed me when I saw him. And with time I used to see his face on screen often, some movies even several times. But it's sure there will be no new film with him, ever. It's the feeling of Absolutness. My condolences go to his family.

Breumaster, feel a virtual pat on the shoulder. I'm not superstitious but this year has been an annus horribilis for so many people even on top of corona, and I've also had a share - let's hope that next year has more luck in store for all of us.

Sounds like you also lost someone next to you. I hope it wasn't to hard for you.

I've "lost" dear people in other ways this year but can't imagine what it's like to have someone close to you die. I'm sorry you've had to experience this, both ruby and Breumaster.

Very good poll and a sensitively written intro. May I suggest some small edits? (below in bold)

Before going into acting, Connery had many different jobs, such as milkman, lorry driver, laborer, and bodybuilder. At the age of 23 he had the chance to become a professional football player, but decided to join the movie business. For his success as an actor, he was knighted by Queen Elisabeth II on 06/05/2000 as a Knight Bachelor.

Most of his characters were sympathetic lead characters but Connery was versatile. His range was wide: once he played an environment scientist, another time played a submarine captain, and once a monk. His tremendously strong and charismatic personality impressed and entertained the audiences for decades.

Which of his performances would you consider to be his strongest?

Thank you, very much, Ruby! :D

I added a few more facts and corrected it like you suggested.

Could you please read one more time and help me, if I forgot

something? I hope it's appropriate now. Thank you, anyway.

If you think  it's ok, I would consider it as ready to go now.

Something wrong or missing?

I feel very honored to have done the poll for Sean Connery. He means much to me.

The Man Who Would be King should be on here!

I've put him on the list. Could you please give me a line for his role?

I guess I didn't watch the movie or it was not so impressive at me that time.

Congratulations Breumaster. This is the first time your poll has been featured at IMDb Home Page (http://www.imdb.com) since July 28, 2015. 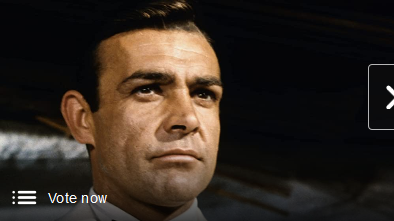 Thank you, guys. I feel very honored about that.

What about his brilliant performance in The Hill (1965) as Joe Roberts the British Army Sergeant Major busted to Trooper for classic British Military punishment?

I would put it on the list for sure, but didn't watch the movie. So I need a short description line for the option like in the other examples. Please would you explain the quality of his character in the movie so that I can take it for the option. Please orientate on the other examples (I guess you have seen a few more movies with Connery). So I can put it on the list and ask for a re-push. :D

Just look at the last option, so you will understand.

Thanks very much for your reply.

This was a very difficult choice as my best Sean Connery film between “The Man Who Would Be King”, “The Name of the Rose”, “The Hunt for Red October” and “The Hill” (I’m afraid the “Bond” ones didn’t have a chance for me).

There are loads of reviews on this film, and while trying not to use previous descriptions, I would suggest a one liner such as:

Please feel free to adapt it, it might be a bit too long! And there are some great black and white photos on the IMDb film page, please choose any if you think my choice should make your list.

I understand your thoughts about Sean Connery. I specially liked his later roles, where he showed his full talent. So at last he wasn't fixed on the MI6-Agent role, which he did perfectly.

I have asked for a re-push. If there are things to change, they will tell me.

Mark Ramius, Jim Malone, William of Baskerville, Dr. Robert Campbell - He had so many great roles!

I saw your re-push request. We will wait to re-push your poll for someone to another person to verify the description for The Hill.

Just saw it, it's a great movie. I wonder how I could miss that one. ;)

Thanks for adding it. Glad you enjoyed the movie.

It's definately not his most popular one, but one of his great acting roles (imo). :D

Turner Classic Movies (TCM) will celebrate the life and career of seminal actor Sean Connery with a programming tribute on Wednesday, November 25.