Best Halloween Episode Couple Costume?
Which of these co-ordinated couple costumes from an TV series' Halloween episode is the best?

Best Halloween Episode Group Costume?
Which of these co-ordinated group costumes from an TV series' Halloween episode is the best?

Ben Feldman, Henry Zebrowski A to Z, E Is for Ectoplasm Ghostbuster One & Ghostbuster Two

Lenora Crichlow E Is for Ectoplasm, A to Z Laverne & Shirley

urbanemovies Laverne & Wilma comment triggered spam filter. Not sure why, fished it out.

Any poll board suggestions for not listed memorable or creative group or couple costumes??? ( from TV or STREAMING MEDIA HALLOWEEN EPISODES ONLY)

The Big Bang Theory (TV Series) The Contractual Obligation Implementation (2013)https://www.imdb.com/title/tt2708314/plotsummaryBernadette suggests Disneyland which is too crowded for the timid Lucy. The girls get all excited about going to Disneyland themselves rather than helping Raj. They call in sick, head to Disneyland and get made up as Disney princesses. Penny wanted to get drunk, ride the rides and throw up. Bernadette is Cinderella, Penny is Sleeping Beauty, and Amy is Snow White.I couldn't find a similar image on IMDb. 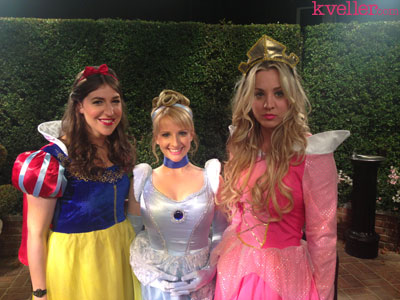 Thanks, I have seen at least two of those episodes with exception of The Justice League Recombination (2010). As always, the episodes were hilarious. I want to use these memorable episodes, so I will need to find a way to relax the Halloween episode stipulation. They aired 16 December 2010, 10 January 2013, 7 March 2013 respectively, a little to far off to reasonably call them Halloween episodes. Great group costume suggestions, thanks again. Added group costume answer options

NO LONGER A HALLOWEEN SUGGESTION

urbanemovies, why though? People just starting to get in the mood for Halloween... Althoguh... That might be the exact idea behind this. Hm.

I probably should be more specific, this poll suggestion is no longer a HALLOWEEN EPISODE POLL SUGGESTION. It could still run during Halloween, originally it featured only Halloween TV episode images. It still features 90% images from those types of episodes, as well as, a few non-Halloween episodes from The Big Bang Theory (TV Series).

I hope this goes live soon - it's October 1st, the day I can officially celebrate the Halloween season without people thinking I'm weird!  :DHey, everyone else has "Christmas in July", let me have Halloween in September!  :D

You could celebrate on April 30th, Walpurgis Night, the anti-halloween fest is six months before or after depending on your viewpoint to tide you over during the year.

The couple list is for two person costume sets, the group is for three person or more costume sets.