Which movie do you find most rewatchable?

The lives of two mob hitmen, a boxer, a gangster and his wife,
and a pair of diner bandits intertwine in four tales of violence and redemption

How many can we choose?

My pick: The Hateful Eight

I can watch these films in a loop.

Jurassic Park is the one I have seen more times in my life, and for the longest period of time, I watch it since I had a VHS as a kid.

Ok, tough question. I've tried to remember when I was a teenager what movies I loved. So, It turns out that I've seen this one a lot and It was a Win whatever the situation I was in (age, hobbies, worries, goals in life, etc).

I'll go with: The Good, The Bad and the Ugly

It was very close with The Thing and Alien but this one was more easy to rewatch with other people than the other two !

My pick: Dunkirk. I have seen it about 9 times.

Thank you for adding:

If you can, don't forget to change the status of this thread to reflect its live poll status.

Congratulations Paok-Kilkis. This is the 30th time your poll has been featured at IMDb Home Page (http://www.imdb.com) since July 28, 2015.

IMDb Poll Board Most Rewatchable Movie 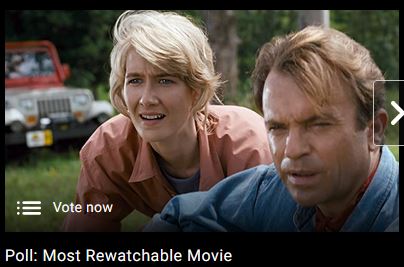 I gotta think in terms a most rewatched film, Wizard of Oz, Its a Wonderful Life and A Christmas Story with their annual broadcasts would be the answer for the average American over the past fifty years.

In more recent memory, the 10 film, $237 million Turner Broadcasting-LucasFilm Star Wars deal that runs from 2016 to 2024 meant those films would be widely rebroadcast frequently.

I would think based on how rewatchable these films are and their ready availability on television these movies would resonate with many people as their most rewatched movie.