Which "Game of Thrones" white walker* scene does the best job of creating suspense and interest in the white walker faction? based on at the time it was shown and includes the Night King, black armored white walkers, bare chested white walkers and wights

"Game of Thrones" show runners, David Benioff and D.B. Weiss have been judicious with white walkers appearances, believing less is more. Despite, being discussed in every episode, initially white walkers were hidden in the shadows or in out of focus shots. Viewers didn't get a good look until two full seasons and of their higher caste until almost five full seasons into the series run. Their limited appearances only further heightened viewer's interest in both wanting to know more about them, as well as see more of them.

All WW scenes are shocking in different ways, but I would tend to agree that opening scene was something. You never see it coming. I can believe its been seven years.

It would be wrong to say the show has gone downhill. but the opening scene gets my vote too for Most Suspenseful "Game of Thrones" Zombie Scene? But, despite all the great scenes and action sequences over the past decade, I am not sure they topped the opening of the first episode for effect. 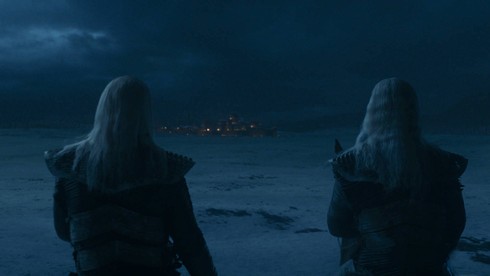 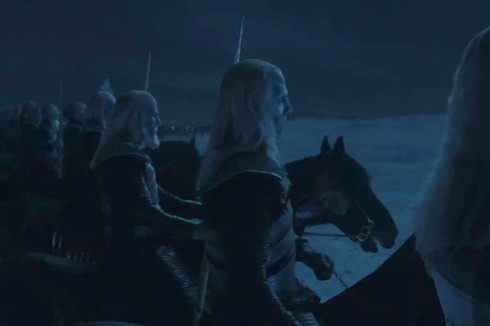 [spoiler]Winter is Coming?[/spoiler]Entertainment reporter, Alexis Nedd for an article for Elle last year, asked the question: Is Game of Thrones Basically a Zombie Show Now? and presented her case in an accompanying article by citing all the evidence from season 7.

Typos:#6 and #14: Caster --> Craster#12: The Night King and the army of the undead break through the wall at Eastwatch with the aid of "Viserion" wight#13: It shatters Sam's sword by freezing it, but Sam kills the walker with his Dragonglass dagger.

Dan Dassow, very cool, nice touch with the iron flanked by zombies. You are truly a champion.

I thought you would appreciate the special touch.

Emilia Clarke The Long Night, Game of Thrones Episode: The Long Night (2019)Scene Recap: Danerys Targaryen catches the Night King without his dragon, Viserion and unleashes the full force of Drago's fire at the Battle of Ice and Fire.

Sophie Turner, Peter Dinklage The Long Night, Game of Thrones Episode: The Long Night (2019)Scene Recap: As those not skilled in combat take refuge in the Winterfell crypts to avoid the undead at the Battle of Ice and Fire. They fatally discover a crypt is not a good place to actually do that.

The Long Night, Game of Thrones Episode: The Long Night (2019)Scene Recap: As Dany and Jon attempt to even the battle with a dragon airborne attack on the undead, the Night King counters on his dragon for control of the skies above Winterfell at the Battle of Ice and Fire.