Live Poll: IMDb Poll Board Movies That Deserve a Sequel

Poll Board members, please choose a movie you think deserve a sequel.

i definitely agree with 'serenity'...also 'the commitments'...

Honorable Mention: The Birds
If they could do it RIGHT - I repeat, RIGHT - and be RESPECTFUL TO THE ORIGINAL ART, it would be cool to see a sequel that picks right up where Hitchcock's left off.  Perhaps by the new use of CGI to bring old stars back on screen? 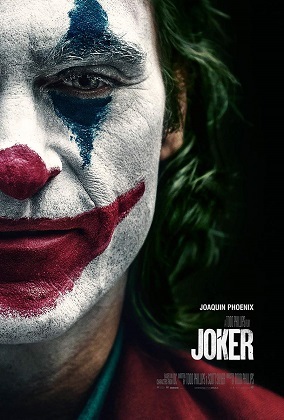 People said the same when 'The Dark Knight' came out.I'm not asking for just any sh*tty sequel like the Marvel/Disney or any other money-making films.I'm talking about a pure quality sequel.Sequels can be a masterpiece too. The best example is 'The Godfather - Part 2'.

Just because someone can't think of a sequel or don't want it, doesn't mean the film doesn't "deserve" a sequel.

The poll author is asking for movies that deserve a sequel. I want it.

I want to see what happens next. Does Arthur escape from that prison?

I know you love Joker, so do I. But haven't you thought about what could happen next?

It's virtually guaranteed a sequel. It made over a $1Billion. Wouldn't this poll be better served if based on movies that aren't getting an immediate studio approved sequel?"2) It is strongly implied that Arthur escaped the prison, otherwise, why would they show us a scene with him walking in the corridor.:"Walking in a corridor in a prison (which he wasn't in The Joker) as well as a mental institution/hospital (where his character was in where we last met)? Isn't the same as escaping the highly secured building. That is an insane leap of judgment on what might be happening. "3) If you make a sequel, you can't talk about his psychology again so you would probably have to talk about his crimes, which would make it more of an action movie than a thriller."Says who? For all we know? The sequel takes place in the hospital as 100% of the setting. Ever hear of One Flew Over the Cuckoo's Nest (1975)?

Ed Jones (XLIX)? You need to work on your reading skills. I did not write that Joker shouldn't get a sequel. Please direct quote me (from any source on the internet that claims that). I wrote that the Joker shouldn't be placed here because we already KNOW that it's getting a sequel. That makes its nomination here kind of pointless.BTW: I rated it an 8/10. Learn to NOT read between the lines. Because you and cinephiles do it so badly.


And I'm actually down to see a sequel and where the filmmakers go with it. 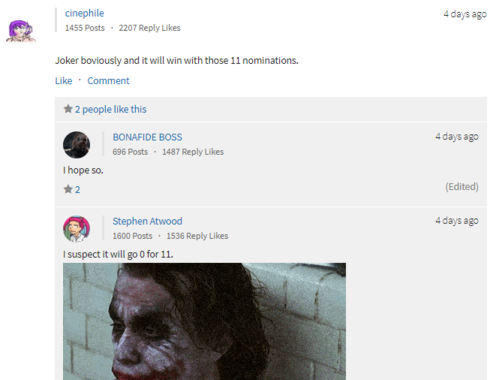 Joker will win 3 or 4 Oscars including Best Leading Actor. That's my opinion.

You think Joker will get 0 Oscars?

I believe Joaquin Phoenix is a lock. He's been the frontrunner since the movie was released, has won the other important awards, has attracted by far the most buzz, and he's "due" after several past nominations. The Academy has neglected movies like Joker in recent years, but the fact that they gave it 11 nominations shows how highly they think of it.Anyway, thinking a movie will not get any Oscars does not equal thinking the movie should not win, or that it isn't good.

Paok-Kilkis,Thanks.Sadly, no one in the original cast of Topper Returns (1941) is still alive.

Master and Commander: The Far Side of the World

Master and Commander: The Far Side of the World added 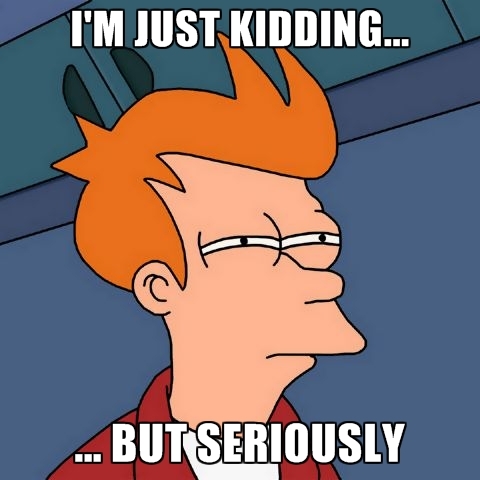 My serious nomination?The Social Network (2010) This time? A more bitter rebuke of Mark Zuckerberg and the state of his social media empire.

Can you change the username in my pick to reflect my current one? Thanks.

I don't really need any movie to have a sequel if it was good and a closure. But just to add an option I'll suggest The Shadow the character has a lot of stories to adapt.

I believe sequels are often a bad idea, they are mostly cheap moves made by studios to make a quick buck. Most of the time movies work stand alone unless it's planned as is the case with trilogies. One movie I don't understand how it didn't get its own franchise was Dredd. Again it's a movie that works fine on its own but I don't understand how all these comic book and sci-fi movies that ranged from okay to mediocre were successful yet that movie flopped and didn't attract a sequel. The possibility of a sequel is extremely low but if it was made they could have done lots of things with the character.

Should I add Dredd?

Sure that will be my pick, sorry for the late reply.

My choice is Three Billboards Outside Ebbing, Missouri (2017)Although, there are more.

Added, thanks for your comments.