Which of these movies where the bad guy or the villain wins in the end is your favorite?

I wouldn’t say the bad guy necessarily “wins” in “Cuckoo’s Nest”. While McMurphy does die, it’s not in vain: Nurse Ratched seems a little softer after being throttled by McMurphy and Chief finds the strength to escape.

What about Roger 'Verbal' Kint from The Usual Suspects ?
Would vote for him if he would appear on the list.

Roger 'Verbal' Kint from The Usual Suspects is appeared on the first part of this poll.

Oooh, didn't know there was a 1st part of this poll.
Well, my vote goes to Verbal on Poll #1 then.

The Silence of the Lambs (1991)
Of course in this movie one villain is caught (the serial killer) while the other villain (Hannibal Lecter) escapes), so in a way it's a split outcome.

This is the list of Dibyayan_Chakravorty's polls as of 27-Oct-2017:

In Decreasing Order of Votes
http://mypollwatch.blogspot.com/2015/03/imdb-polls-descending-order-of-votes-by.html#Dibyayan_Chakra...

Congratulations with the poll! But I’m surprised by this poll, especially now it’s featured on the homepage. I think it contains huge spoilers. That’s why I didn’t want to see the list.

All the films are 4 or more years old. The spoiler issue will not be a great problem in this case. Plus, I didn't mention any written plot twist in my poll.

I saw your reply on this thread. Why you delete your replies specially on my PS threads most of the times? There's nothing wrong in sharing your opinion. Please don't do that.

03 November 2017: Greatest Movies Where the Bad Guy Wins - http://www.imdb.com/poll/n9NnoVMlxsY/ (A poll by Dibyayan_Chakravorty)

Was Se7en also in the first part of the poll? (We have same vote in this btw.)

In the first poll, you should have included the Godfather films, because evil wins. I hate them, mostly because they're boring, but they do fit.

We know you hate them.

Now, they're supposed to be criminals but the whole movie is about a system... oh boy, forget about it, yes they're bad, they're evil, they're the devils personified.

And technically, if Hannibal Lecter is in the list, Vito Corleone or Michael Corleone could have been there. Hannibal was a bad guy but not THE bad guy of the film, Buffalo Bill was.

But we're generally indifferent to what bores us, if they were really boring, you wouldn't insist so much on how you hate the film. 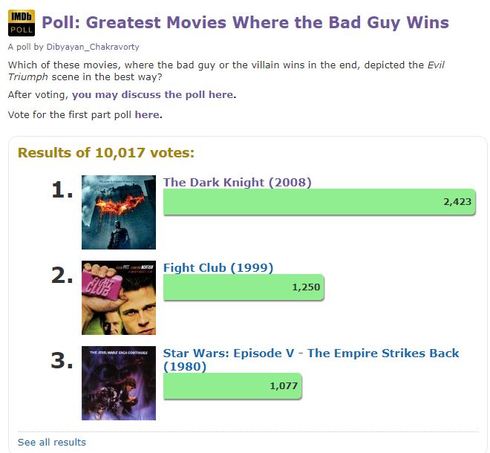 That is in the first part poll. 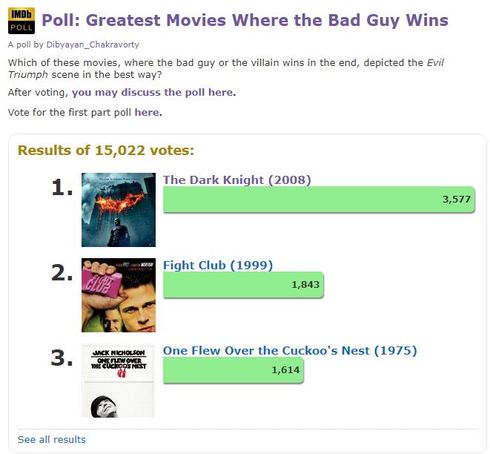