Except Captain Jack Sparrow who is your favorite character from Pirates of the Caribbean franchise?

Can't you make it a character poll instead of an actor poll?

There are not all the photos for the characters. For example for captain Blackbeard there is a diffrent character

It's possible to tell IMDb which character you want in the picture, but I don't remember how.

You make it a character poll and not a people poll. When do that, you got hope the character page already set up. If not, oh well, you got to skip him or set the page up yourself.

There is one character that was only in the first film, POTC:TCOTBP, that I wished they had done more with because she was feisty, interesting and held her own in the scenes she was in. It was Anamaria, the female pirate, as played by Zoe Saldana. But since then, she went on to play in "Avatar", "Star Trek" and "Guardians Of The Universe". I guess she is too big and expensive to be lured back into that role.

Grangy, I thought she'd have been a great main-stay, but then never returned. Shame, because I liked Ana Maria. At least Barbosa came back. He's my favourite character, even including Sparrow.

I changed the poll from images to characters. Admins, please correct the link of the list in the description post.

I only saw the first one so I don't know most of the characters but I'd vote for Elizabeth Swann. Naomie Harris is one of my favorite actresses, though, so it'd be interesting to see her character.

May I suggest a few edits? They're below in bold:

Favorite 'Pirates of the Caribbean' Character

Except Captain Jack Sparrow, who is your favorite character from the Pirates of the Caribbean franchise?

'Just a comma after Sparrow, the added "the," and then capitalize the word "Character" in the title -- to be considered for the home page, the title has to have proper capitalization. Thanks. : )

The image choice #4 does not crop well. This would probably disqualify this poll for the IMDb Home page if this poll goes live. Please consider switching this choice with some other choices, such as #6, #7, #8, #9 or #10.

Ooops, you forgot one very important furry character! And he is not the human being in this picture. http://www.imdb.com/title/tt0449088/m... 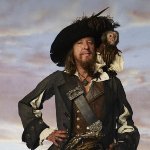 LOL! I love your joke! Of course, I didn't mean that Jack! I'd meant the other Jack - the monkey sitting on Barbosa's shoulder! The animal is a character too.

Still no Jack the Monkey and Annamarie; even though, I had created a character page for Annamarie?

Paok, would you consider making the edits Ruby and Dan suggested? :)

Captain Barbossa and his monkey.

Please capitalize "character" in the title of your list. Please change:
Favorite 'Pirates of the Caribbean' character

To:
Favorite 'Pirates of the Caribbean' Character

Please change the order of your poll so that the first five images are easily viable and crop well.

Except Captain Jack Sparrow, who is your favorite character from Pirates the of the Caribbean franchise?

Except Captain Jack Sparrow, who is your favorite character from the Pirates of the Caribbean franchise?