Live Poll: The Best Reason Why Santa Needs a Lawyer

Warning: Spoilers in the poll

What is the best reason for Santa Claus to have a lawyer?

Starting with Santa Claus (1959), when I was young, except for a few, I think, I have seen almost every Christmas movie with Santa Claus out there. I have noticed that Santa sometimes has done some legally questionable things. And, in a few, he has hired a lawyer or have elves that cite rules and regulations like a lawyer: Fred Gailey, Miracle on 34th Street (1947) - Bryan Bedford, Miracle on 34th Street (1994) - Sam Whipple, Il Natale che quasi non fu (1966) - the elves Bernard and Curtis from “The Santa Clause” series, and Wille from Fred Claus (2007). Okey, while using only a few films for the images on this list, but using many issues mentioned in the films or is inherent in the legend of Santa Claus, what is the best reason for Santa Claus to have a lawyer?

Yes, I have seen way too many movies involving Santa Claus 🎅🏻. And yes, I too think that Curtis sleeps with the elves code or handbook!

just for fun, who is the better keeper of ‘The Code’ books in movies? Curtis or Captain Teague?

#34: if Danish, it should say Julenissen

Thanks for the corrections. I spent a long time on this one. Are any humorous?
And I do want to get option 34 right because I’m trying inform people of the many types of Christmas traditions around the world. Many have great stories behind them!

I would probably vote for "To sue Santa impersonators".

Thanks for the correction. Are any funny?

Only a few seems serious and I blame it on me because of less awareness. Also, the fact that you have 35 options that is great.

Two were. Option 34 because there are different Christmas givers figures around the world.
Option 3 was serious because it was a major theme of the story. Valentine Davies, who wrote the story, later published it as a novel, and did say Sawyer was a quack passing off pop psychiatry as real psychiatry. In the book, it says that Sawyer did not go to an accredited college to study psychiatry, but got his degree through what is commonly called a paper mill night school / correspondence course. The words that I quoted, “latent maniacal tendencies” and hate your father/love your mother, were the phrases most commonly used in pop psychiatry at the time the story was written.

NORAD Tracks Santa is an annual Christmas-themed program
that starts on December first,
but the actual Santa-tracking starts on midnight of December 23.
It is a community outreach function of
the North American Aerospace Defense Command (NORAD)
and has been held annually since 1955.
Every year on Christmas Eve,
NORAD tracks Santa Claus as he leaves the North Pole
as he journeys around the world on his mission to deliver presents to children

A miserable conman and his partner pose as Santa and his Little Helper
to rob department stores on Christmas Eve.
But they run into problems when the conman befriends a troubled kid.

https://www.imdb.com/title/tt0133093/mediaviewer/rm3074790401?ft0=name&fv0=nm0915989&ft1=image_type&fv1=still_frame I did some checking on that. The two speaking roles listed as Sercret service Elf has “Fred Claus” listed as there only roles. However, when I had checked your videoes, I had seen agent smith wearing similar glasses in “The Matrix” sampled in “The Santa matrix”. This leading to the throught that elves were dressed to invoke  the impression of “The Matrix”.

Ooops, I forgot a return link. It is added now. 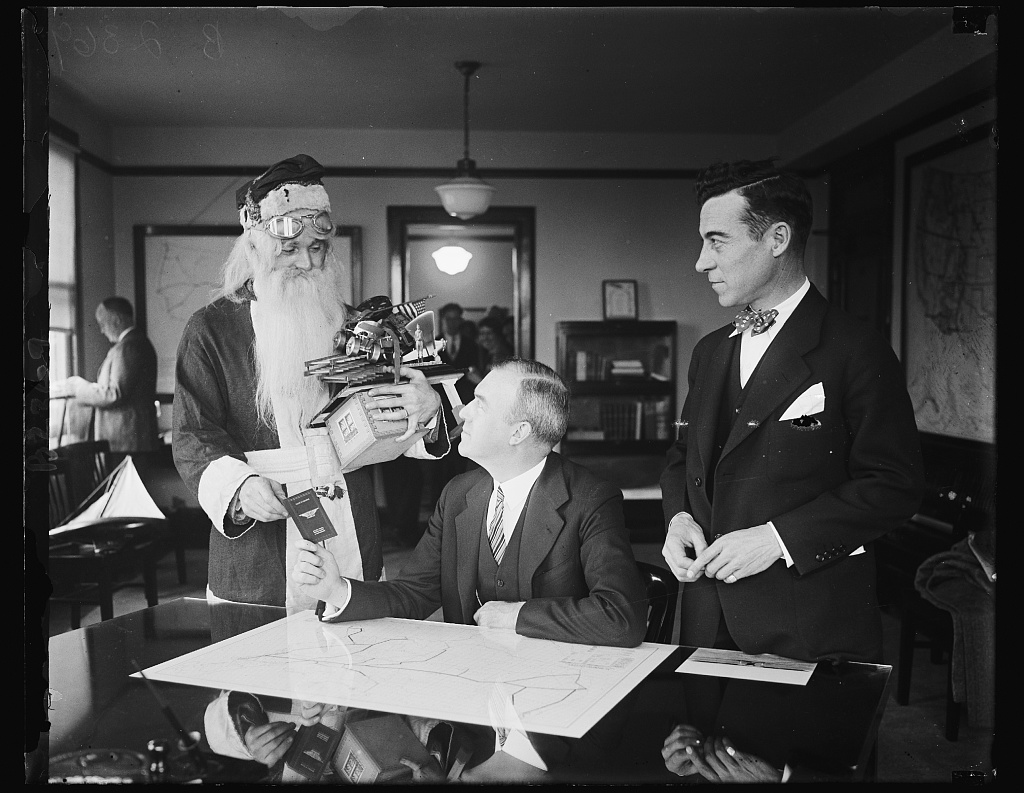 This is the image of Santa receiving his pilot’s license at https://www.loc.gov/resource/hec.34635/ I wish the IMDb had this image. It is cool, retro and historical too!

It is down. I had combined two together.

The question is written twice in the intro, I would suggest removing one.

#21: To file a mental cruelty lawsuit

The edits are done. But I hated removing the first question because it got the poll to direct to the question..

A down the chimney bump.

Thank you! I was hoping this one would go live. It was fun to do.  I already made the changes Dan is going to ask me to do.