On 08/11/2014, Robin Williams passed away. I want us to honor Robin Williams with a poll, like it happened last year by Jen. I'm not good in writing laudatory speech, so the text is debateable for sure. But it's a personal matter for me to do this. I suggest, that we collect the most significant dramas of Robin Williams - without the bigger roles like 'Mrs. Doubtfire' or 'Good Morning Vietnam'. This poll could be closed on 09/01/2018 for making another next year.

In the title it should be Williams’ instead of William’s.

How about The World According to Garp?

Sorry for that. I'll correct it. When I wrote it, it looked right. ;)Corrected. Thank you for contributing! I put Garp to the list. :D

Sorry, I forgot - It shouldn't be in the top 250's. That's because I really want to give the more little movies of Robin Williams a chance.

Funny how many RW movies he actually disliked, I did approve what he said about Dead Poets Society but boy, was he a sourpuss with Mrs. Doubtfire.

I'm waiting for an effective question or at least a conclusion to your text.

Looking up that "I'm waiting for..." answer,  I can't say it was the nicest thing to say... especially the bit about the "conclusion". You were right in the sense that I should learn to have a point when I write something but it really took me by surprise and not in a pleasant way.

Don't mind, we're all human. Show me one, who is perfect ! ;) Kindness is a thing that vanishes more and more. We have to protect kindness. Else - at the end - we would fight each other. So no one would win. I love win win situations, because then no one looses. ;)

True words of wisdom... not that I think that every situation calls for kindness, in a perfect world it would... I'm a kind little boy but not a Care Bear.

The world isn't perfect. But we try to make it perfect to reach a bearable condition in our societies. Isn't it? I'm no Care Bear, either. And yes - sometimes situations are not to be treated kindly, specially when someone gets into danger by others in physical life. So what's the definition of a 'perfect world'?

Breu, are you only going for dramas or will you take any genre? It seems like you're saying both at different places.FYC:Dead Again - a short, but memorable two-scene role.Hamlet

Hi, Jen. :DCould you explain it a little more, please?I looked at Boxofficemojo this night and wondered about the amount of Cash thatflow in by 'Dead Poets Society'. Looks like it is a Blockbuster. So I would take it fromlist. Is that what you meant?

P.S.:So I wiped  'Patch Adams' from the list - not because of Roger Ebert (Ebert has no effect on my choice - and will never have any!), but because the beautiful movie 'Patch Adams' seems to be a blockbuster, which I sat as a no-rule.

I was just asking if the list should only be dramas, or if you want all his 'smaller' movies?

It should be dramas or at least thrillers and lesser known movies. I'd suggest a boxoffice income below $75,000,000.00 as added rule. ;) Sorry for asking harder, but I didn't understand your first reply right. :D

Nice one, Breu.Some corrections to your text:It has been four years since the legendary comedian and drama actor Robin Williams left this world. He died on 08/11/2014 in his home by suicide. With this poll we want to honor a comedy genius, a man who made the world a better place, even if he couldn't cope with his own problems. Robin Williams had some Blockbusters in which he entertained us with his warm, sympathetic humor, but he also put his heart in lesser known and sometimes also very serious drama movies withserious matters of being human. No blockbusters, no Top 250 movies.Which of the Robin Williams movies below, suggested by the IMDb Poll board users, would you pick as your favorite? I think you can remove (of these) after the question.

Added a sentence:Which of the Robin Williams movies below, suggested by the IMDb-Poll-board users, would you pick as your favorite? If you don't know one of them, you can pick the one you would most likely want to watch.

Yes. I see you're right. Thank you for the useful corrections. :D

It's a time ago, I saw it. Shakespeare is cool. I like he language that often contains so much in so less words ;)

Ok, Jen added them two. Shall I add your profile linked on Jen? I thought last time you didn't want your username. Is that right? Sorry for reacting so late. It's hot like hell here in G.

May I suggest just a few edits to the intro? (They're in bold except I also omitted "even if he couldn't cope with his own problems," which I suggest that you do omit. I know that your intention is the best, of course, but, in English, I'm afraid that, to anyone who might be dealing with similar hardships or conditions as Williams did, that it might perceived as a bit simplistic or dismissive.)It has been four years since the legendary comedian and dramatic actor Robin Williams left this world. He died on 08/11/2014 in his home by suicide. With this poll we want to honor a comedy genius and a man who made the world a better place.Robin Williams had some blockbusters in which he entertained us with his warm, sympathetic humor, but he also put his heart into lesser known and sometimes also very serious dramatic movies with serious matters of being human. No blockbusters, no Top 250 movies. (By the way, I think that the intro was very well-written. A few suggested edits, in no way, takes away from the stylistic choices that came together to create such a good, sensitive tribute to a giant talent. Bravo.)

Hello, ruby. :DThank you for showing me the right way. I'm sorry for answering so late. But we have horrible temperatures in Germany - and my brain doesn't cope with it. I try not to think and specially not to move, if it isn't necessary. I made the changings you guided me to do. So I hope, it can be a tribute to him. :)

But we have horrible temperatures in Germany - and my brain doesn't cope with it. I try not to think and specially not to move, if it isn't necessary.

Hahaha﻿. I understand: recently it has also been very hot and humid here and, like you, I don't tolerate it well. My body and brain are both slower and less efficient. Even my cat, usually a ball of energy, just lazily suns herself like a lion on a rock, and I do believe she expects me to bring her food and water to her so that she doesn't have to move, lol. By the way, your activity here on the board is always at your convenience - you weren't late at all. 'Great poll, too.

Breumaster, I totally feel for your problems. Summer is usually the hardest season for me due to heat: I start having problems at everything that is more then 20 Celsius and since summer in Ukraine quite often goes to 30+ sometimes I'm barely functioning... 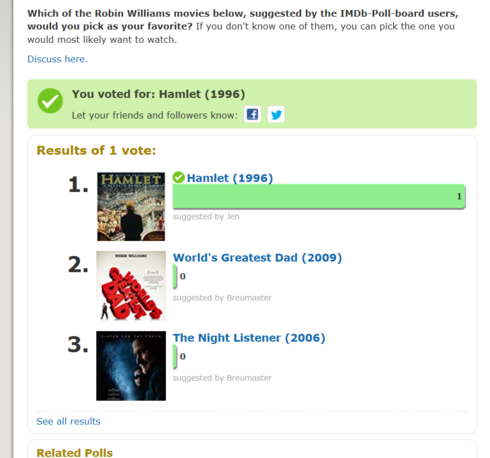 Thank you, guys. It's very kind of you. :D Sorry for not commenting next few days. The wether struck me down. These tempratures are sure not normal. I'm totally sick about it. I'll lay down a few days.

We wish you cooler days ahead. Perhaps a cold bräu?

I like it. :) Just for once we have a real summer in these regions. The last one must have been a decade ago.

Denmark must also be affected by the heat wave, no?

Sure, though it seems to be coming to an end.

Thank you, guys. I hope so, too. By the way - my advice is to just drink water with a little salt in it, these days. This heat is not normal. I can't remember to have had so much extremely hot days in a row. The grass turned from green to brown and there's not enough water to build big clouds on the blue heaven. Only little ones, so it can't rain. The rivers are low and in some ponds and little rivers the fishes die. Not normal ! I lay down, then, again.

Hello, Guys!Yesterday evening there were several showers, just a few hours after I wrote my last comment. Since then  it's 10°C colder than yesterday. That's worth a real praise! The harvest is burnt in wide areas, but the wine-growers can harvest now - in August! I feel much better, thank you for your encouraging and sympathetic words.  I hope the biggest heatwave is over now. With the death of Robin Williams, which is the fourth aniversary of Robin Williams death at 08/11/2018, we also should also mourn for 92 dead people in Greece because of forest fires, which are alledgedly layed by arsonists. That's real vile. I hope the familys can cope with it somehow.That's the webpage of a very serious german newspaper - if you can read german language, it might show you what's going on: (I don't know if it's allowed to link newspapers here, but I hope so - if not, just delete the link):https://www.sueddeutsche.de/panorama/waldbraende-in-griechenland-aus-der-asche-schreien-die-toten-1....