Which of the nominees of the 2019 Academy Award for Best Motion Picture of the Year do you think should win?

A Star is Born

I really enjoyed it as well, the story felt fresh and the music was electric. Wonder if it's a strong enough contender to win it.

Bohemian Rhapsody is my number 1 pick, but I am yet to see everything except BlackKklansmen, Black Panther and A Star is Born and the latter should not even be nominated. Glad to see its momentum fading quickly.

Nice one - I wonder if BR has a realistic chance against some of these more heavily favoured films. I'd imagine Black Panther has about a 0.001% chance of taking the award LOL

As much as i'd love to see it happen, I honestly don't think Bohemian Rhapsody has a chance to win. But it's fine and I don't mind as long as Malek takes Best Actor. Black Panther I don't know. The SAG Best Ensemble Award sure means something and I can see them pushing further the idea that it was the first superhero film nominated for Best Picture, especially with Best Picture really being wide open now. Cuaron's film had strong momentum, but maybe the Netflix aspect hurts it more than we think. I have a feeling Green Book is going to take it. Win the Globe, PGA and seems right up the Academy's alley subject-wise. And it feels kinda unreal Mahershala Ali is a 2-time Oscar winner soon, even more surprising than Waltz to me.

My hopes rest on The Favourite, which will be released soon in my country.

(Just saw that our  distributors, in their infinite wisdom, slapped a tagline onto it: The Favourite - Intrigues and Insanity. *facepalm. They do that all the time. Cold War - The Latitude of Love.  Green Book - A Special Friendship. Vice - the Second Man. Isle of Dogs - Atari's Journey. And, I kid you not, Wag the Dog - When the Tail wags with the Dog. Sorry for the rant, lol. I would make a poll about this madness but I don't want to spread these crimes against humanity.)

Agree on both fronts.  Up with Lanthimos and down with idiotic tag lines.  So many films have been let down by idiotic marketing.  This means that either people don't see great movies or perhaps worse, they see them expecting something different and have their views and (God forbid) "reviews" coloured by viewing through the wrong lens.  Case in point - Velvet Buzzsaw.  It is not a horror movie but a movie within a movie which appropriates Slasher tropes in providing a commentary on the intersection between Art and Commerce.  (takes a breath) Rant begets rant.

Nice! Happy you liked it a lot - it really was an awesome picture.

When I see this in the theater with my sister, Sierra, I'm excitedly rooting for Best Picture Ever, Bohemian Rhapsody! Alright!

The Favourite.  So great to see Lanthimos receive mainstream recognition.  The director's first real dip into "genre" is as warm as it is caustic.  Above all, it's funny.

Congrats on the poll Kyle! The movies that will battle is Roma and Green Book. For me if Roma wins will be a major mystake, Green Book is  really an amazing film.

From the 8 nominated, only 3 of them are worthy of winning: Bohemian Rhapsody, The Favourite and Green Book. I liked A Star is Born as well, but is just one step behind. Vice and Roma have great acting, cinematography and editing, but not enough to make them a great movie as a whole. Blackkklansman is a good and enjoyable film, but is not worthy of a nomination in my opinion. And Black Panther... well, nothing to say; its nomination left me speechless.It hasn't been a great year for movies to be honest, specially comparing it to previous years. And I hope the winner is a movie that truly deserves it and that we don't get another moment like Shape of Water winning over Three Billboards.

Bohemian Rhapsody is currently winning. One of the most insultingly mundane, predictable and utterly lifeless biopics in a decade is currently winning. You could argue objectively for it being the worst film on the list... and you people are voting it number 1. The denizens of IMDb have shown themselves to be the plebs they truly are XD

Amen. Almost four months later and it is both astounding and appalling that people genuinely think that film is a loving tribute to Freddie Mercury. How contemptuous it is of him is honestly one hell of a feat that other biopics will have to spend lifetimes to even partially imitate. On the plus side, if it does win, the backlash against it and Rami Malek's performance will be a work of art that would go well in Louvre when they realize what an embarrassment they both are. Also, it's not just the worst nominee this year. It might be the worst nominee of this millennium - and that's including films like "The Blind Side" and "Extremely Loud & Incredibly Close" (speaking of how the hell did they get nominated?!).

"Roma". It's exactly the sort of film that will be an inspiration to future filmmakers much like "The Silence of the Lambs" and "The Godfather" are, plus it's time for an incredible foreign film to take the big prize home when films like "Crouching Tiger, Hidden Dragon" and "Amour" were close.If "Bohemian Rhapsody" wins, it will quickly become the worst Picture winner since "Crash", perhaps ever with time. And that goes for Malek's performance, too. The scenes of him playing Freddie Mercury off stage are astoundingly hollow and feels like... well, I can't think of the proper words I would use to describe it, but out of 2.25 hours, he only felt like Mercury for a combined twenty-five minutes and for a movie that's supposed to be an unadulterated love of all things him, that's embarrassing. 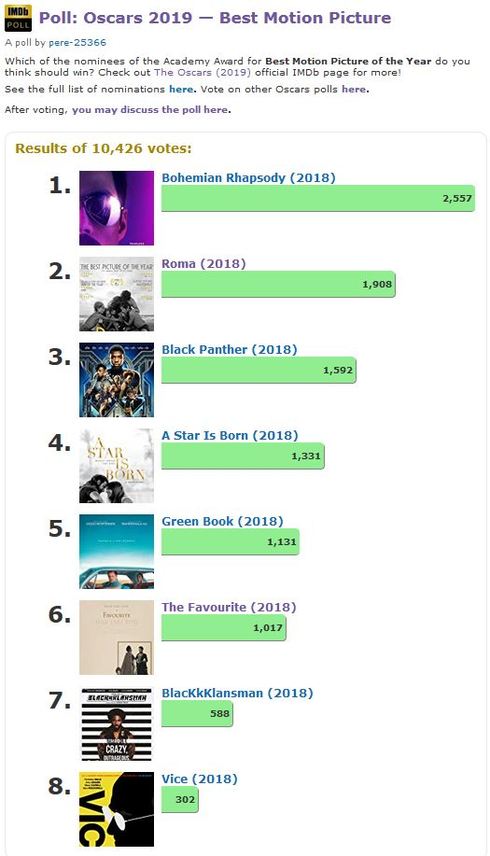 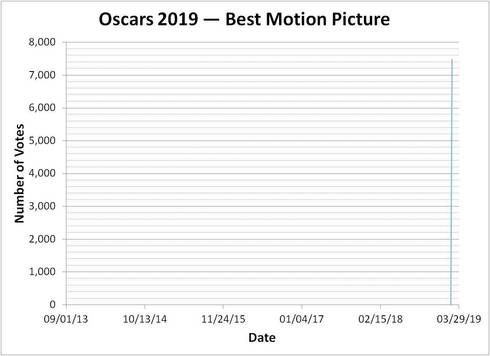