A few days of 2020 have already passed and that means that you've probably saw at least one movie. So did we. Which of those is the best year-starter?..

Great idea. A film in January 1 is always a great way to start a year.I had a problem with my Internet during the last and first day of the year, so my first film of the year came from my father DVD collection, it was Joseph L. Mankiewicz The Ghost and Mrs. Muir from 1947.It was a good film, and it was from one of the years were I have seen less titles so a good choice.

I am glad my first movie serves as an inspiration, not only when technology fails, it is always a good time to see older films.

Hi, Nikolay. :DMine would be 'Jojo Rabitt' or '1917'. I guess it will be '1917'.That's a time which is completely lost between all the WWII-movies.I'm very curios about, even though our history lessons were very good at school.

Breumaster, would love to hear you clarify which one was the choice! Great idea to start with a war movie as a way to do it differently.

First feature film I've seen this year is not a usual pick for holiday season (which in Post-Soviet countries takes most halves of December and January at the very least) and while not a war movie, is very close as it deals with French Foreign Legion. Btw, if you haven't seen it, I highly recommend Beau travail (1999). It is certainly a very unusual movie with multiple layers and... Frankly one of the best endings/final shots ever put to film.

I specifically wanted something beautiful, unusual, bold and meaningful for my first movie of the year. On top of that, I wanted to see this movie ever since noting it from "The Story of Film: An Odyssey" (2011) in... January 2018. 2010's were crazy busy and hectic...

Then I rewatched Home Alone (1990) as a second one, knowing I started strong. :)

Nikolay:
When I suggested, I did think you wanna hear about our first movies in cinema we're about to see. But I've allready seen a few movies this year, before going to cinema.
The first movie I saw this year was 'Toy Story 4', then 'Anna' and then 'Our Idiot Brother', which was the best of those three, I think. ;D
So it's 'Toy Story 4'

If you asked me, which of them was the best "year starter", I would have said:
'Our Idiot Brother' ;)

Hm. Interesting whether confusion is on my part and intro should be rewritten slightly... When it comes to things like that, I always suspect that my formulation was faulty...

Nikolay:Past Scriptum - It was my fault. I didn't have read your issue as simple as it is. My mind was at IMDb, which is the greatest database and also a megaphone for cinema business industries. ;D

Movies that I watched in 2020 so far and the ratings that I gave:

I'm slightly jealous in a good way as my counter so far are 4 television episodes and 2 movies. Will be catching up with a mini-marthon or two. Just conducted a list of movies for 2020 and was barely able to narrow it down firstly to 505 or so (430 new contenders, 74 remain from the last year) and then divide the list in three parts: 2019 list catch-up, 365 movies for 2020 (let's see how close I'll get to the number and in terms of completion) and some movies that I'd like to watch at some point, but feel no need to in 2020 so far (but might later). :) 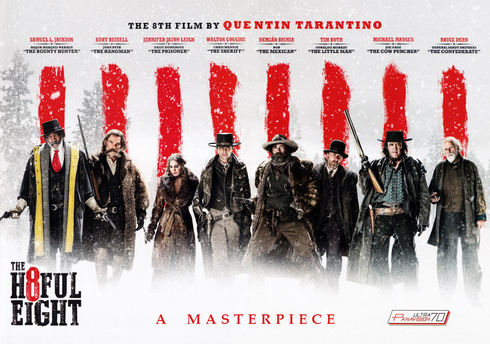 No matter how many times I watch it, It's always entertaining. It's a masterpiece.

I can totally see the appeal of seeing that in the winter. It was snowing extremely when I saw this in theater and it added to experience immensely. :)

mihailo.razvigor, I can get that: quite a few people I know called it his worst to date for many reasons and a rehash of his own and other ideas even for his standards of elaborate multiple layer homages.

I'm kinda in the middle there - I certainly don't consider it his best, but it's a solid and interesting movie with strong ensemble and a superb score.

cinephile, believe it or not, what is ridiculously gory by mainstream standards is a walk in the park when compared to European arthouse movies and modern horror.

And despite his sensibilities and influence in bringing b-movie aesthetic in the bigger studio movies, Tarantino is mostly mainstream. :)

I think you mistakenly set the wrong conversation type.

Just noticed myself, but thanks for noting!

Among others: Hellboy II - The Golden Army - with Ron Perman (the BEST Hellboy)https://www.imdb.com/title/tt0411477/

I watched Silver Linings Playbook on the 1st.

once upon a time in Hollywood

First movie of the year, in the middle of watching 'Grave Encounters' from 2011 (don't ask why).  Not the best year starter, lol... great idea just wish I had something better to contribute!  :DI find myself watching fewer and fewer movies recently because I feel like I've seen all the good stuff!If I have a better pick, I'll let you know.  :)

I have the opposite when it comes to movies: I always feel like I missed too much good stuff. :)

Mary Poppins (1964)And please add the question in the list.

Jessica, great thanks! Added! Additionally, thanks for correction: don't know how that question eluded the poll intro...