No Best Picture nomination for Babylon.

There are not much surprises this year. It is what I expected. Triangle of Sadness' nominations are the most surprising. But, it is not even that surprising. In all the recent years, with Roma, Parasite, Drunk, Drive my Car and now Triangle of Sadness. The Oscars have wanted to give a spot to a festival darling. It is a symbolic spot, its odds of winning, in any category, are null.

Inu-oh (2021) should have gotten a Best Animated Feature Film nod. Another criminal snubbing for a Masaaki Yuasa anime.

@Pencho15​ I don't think five individuals have recieved triple writer-director-producer nominations for the same film in the same year ever. While, this type of triple nomination is not usual, a near clean sweep is. The limit is set by the directing category which has only five nominations per year. 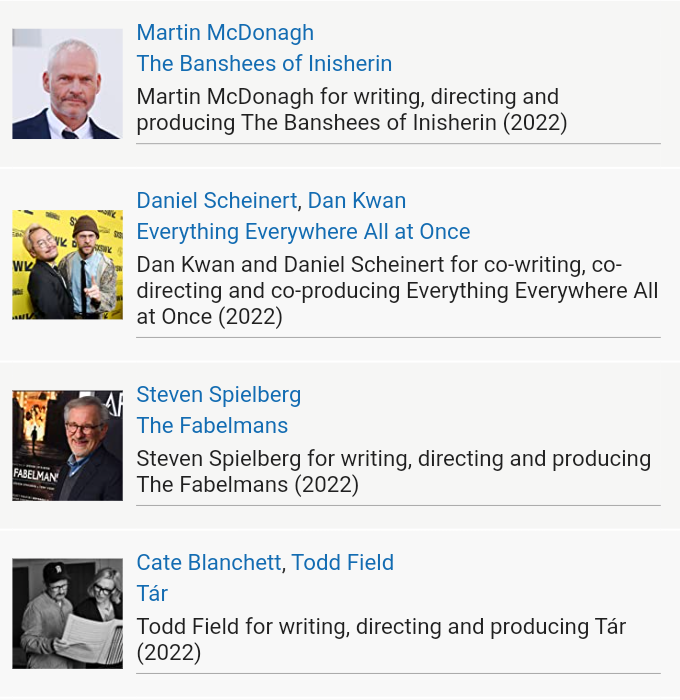 Plus, I suspect it could have been easily six this year, if Ruben Östlund took a producing credit for Triangle of Sadness. I suspect he was the most powerful person on set and calling most of the shots anyways. Plus, he has taken producing credits in the past and it seems like they were giving producing credits away like candy on this production. 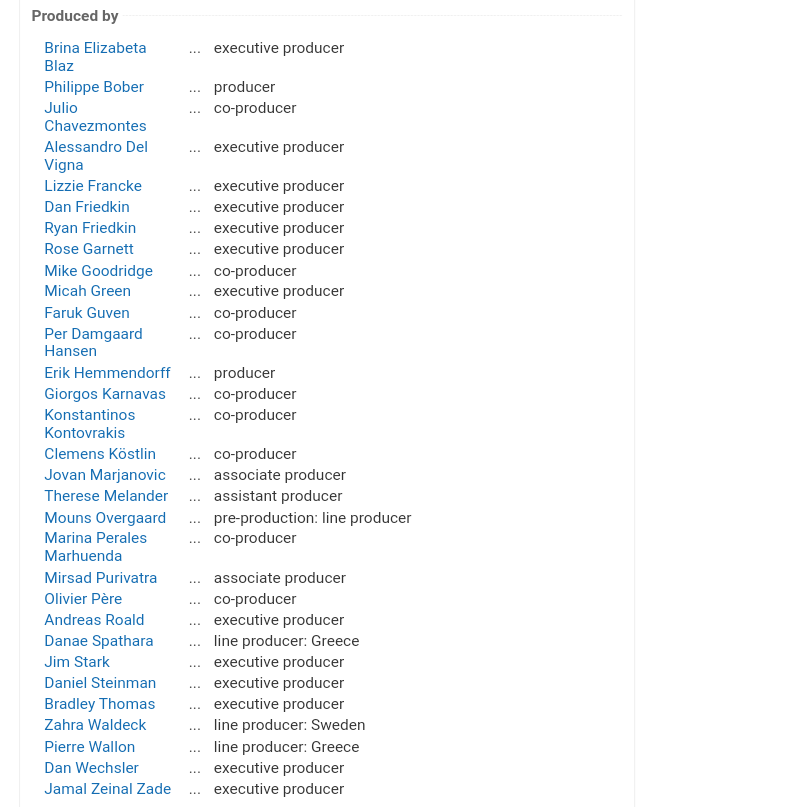 As of 2021, "officially" thirty-one individuals across thirty-seven films have secured triple Oscar nominations in the writing, directing and producing categories for the same film. In another four other instances, Orson Welles, Leo McCarey, George Lucas and The Coen Brothers "unofficially" secured the same film triple, but were denied official credit due to Academy or guild (WGA/DGA/PGA) policies at the time. Total: 41 triple Oscar films over 70 years

@urbanemovies​ I have no idea if it is the first time, but it certainly isn't common. Added.

The Bob's Burgers Movie, a musical. Could have gotten one song and an animated feature nomination.

@Tsarstepan​ Bob's Burger was not on the Original Song shortlist, so it was not possible to have it nominated there, I can't add it as a surprise for that reason. 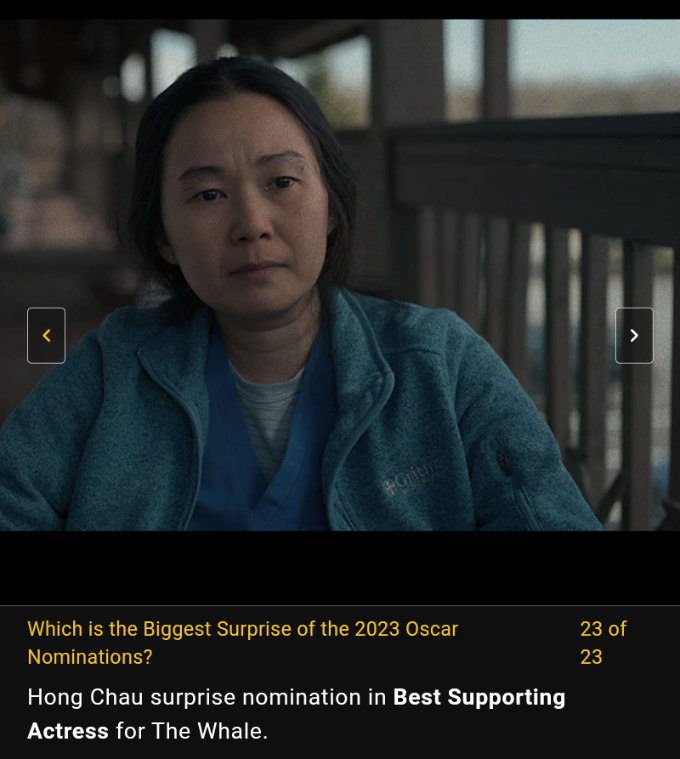 Ana de Armas Best Actress nomination marking the first time in history when the most nominated film at the Razzie Awards is also a contender in a major Oscar category.

If Blonde wins the worst picture award at the Razzie, it might also mark the first year where I genuinely prefer the Razzie of the "Worst Picture" to the Best Picture winner.

#18: Women Talking getting a the Best Picture nomination.

@Jessica​ All corrected, thanks. I think this year I had less errors than in previous editions of this poll.

I just noticed a couple of other details that might qualify as surprises.

1)  A rare NC-17 or X-rated Oscar nomination. Further, the film wasn't edited or compromised to get to a marketable R-rating, which happens more often than not, in these cases. 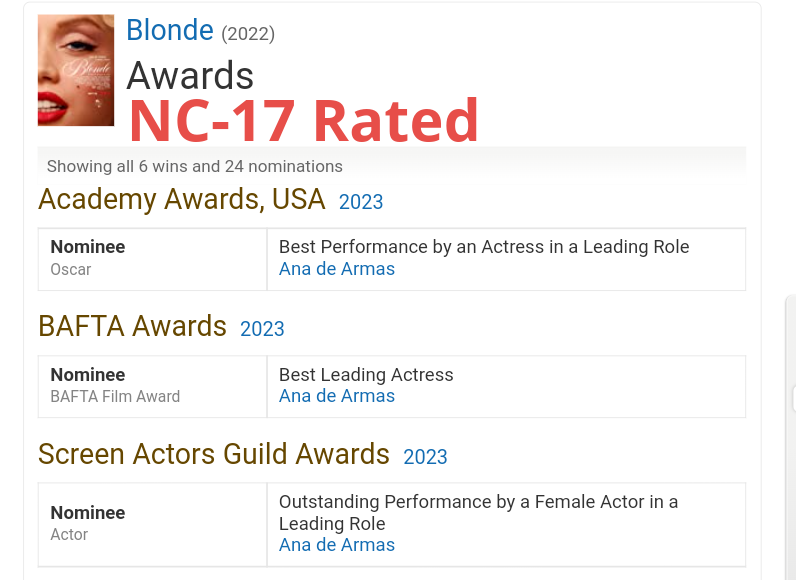 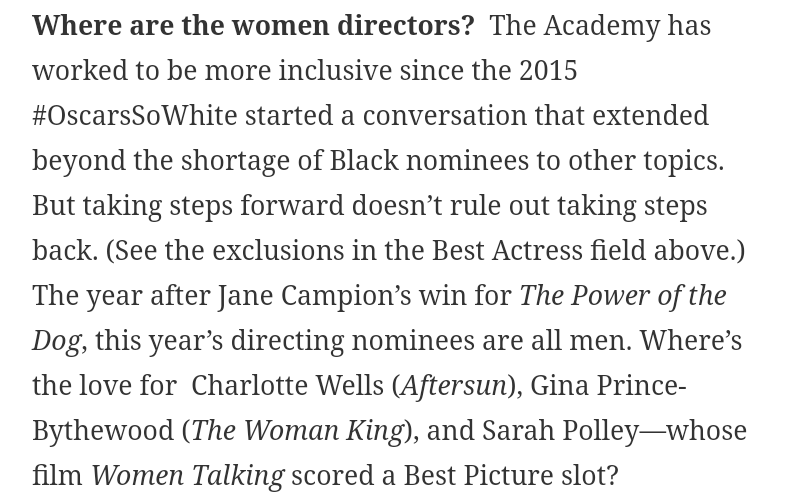 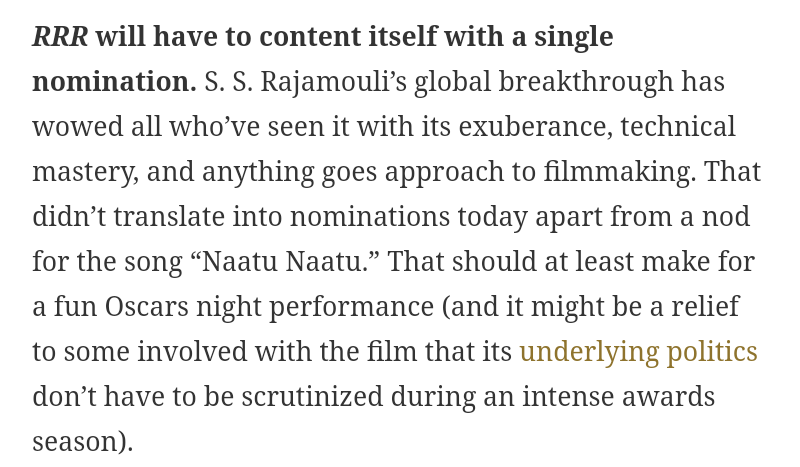 According to a IMDb advanced search, Blonde is the fourth NC-17 rated film to ever be nominated: https://www.imdb.com/search/title/?groups=oscar_nominee&certificates=US%3ANC-17&adult=include

I added that one and the one with the female directors.  I don't know if it is worthy or not, but I don't think RRR was ever really seen as a strong possibility for many awards, and I already included the movie for its nominated song.

It is only rare because there are so few NC-17 films (79 ). Many of which were probably not even eligible to be nominated at the Oscars. All in all, a NC-17 has decent odds of getting nominated.

@cinephile​ If you mean that those films that chose to be released with an X or N-17 rating receive a higher ratio of Oscar nominations than the general pool of Oscar-eligible films, I agree.

By my rough tally, there are thirteen "Adult Only" First Run MPAA rated films that were released in U.S. during the past six decades, four of those garnered at least one Oscar nomination, about a 30% success rate.

Converely, this past year there were 301 eligible films for Oscar consideration and only Blonde (2022) was NC-17 rated by the MPAA. So, I would call a 1 in 300 odds, a longshot and rare. The odds are more like 1 in 2000, if you consider all Oscars eligible films and films MPAA rated X or NC-17 over the past six decades. So, the premise at face value has merit; but I guess it comes down to how the rarity claim is phrased.

Only half of the 79 films you cite as NC-17/X rated have a US box office total on IMDb and most of those have multiple cuts with multiple ratings including a R-rated version that was released to North American theaters. Plus, the total is inflated with IMDb including films having multiple cuts, including later issued director's cut and the popularity of unrated video releases. As it includes films with multiple certificates and those movies were mostly theatrically shown with the lower and more marketable MPAA R rating. 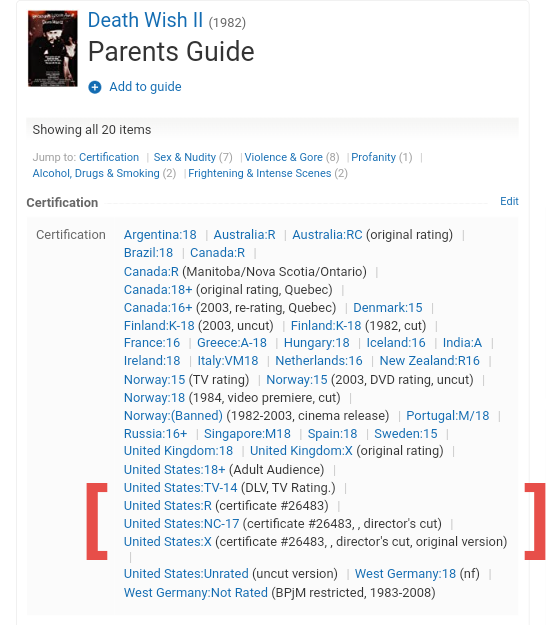 In the 55 years, since the MPAA began issuing ratings certificates in 1968 for film distribrutors, a limited number (maybe a dozen to two dozen) films have had a first run release in theaters as X-rated or NC-17 rated. Those U.S. distributors stuck with an uncut and unedited version during the film's initial release. They refused to compromise and making film edits that are common to get more marketable ratings that usually boost profits by appealing to a wider audience.

I can only think of four films, X-rated Midnight Cowboy (1969) [a few years later, the same cut was re-rated R unedited], X-rated Last Tango in Paris (1972), NC-17 rated Henry & June (1990) and NC-17 rated Blonde (2022) that were first run released in an "Adults Only" version and that cut was used to recieve an Oscar nomination (excluding the foreign film category). Just to be clear, some films have received Oscar nominations and had an Adults Only rating outside the USA.

Likewise, other films were U.S. theatrically distributed solely with a U.S.  "Adults Only" cut (version used for Oscar consideration, if it was submitted) and didn't recieve an Oscar-nomination. These films include Beyond the Valley of the Dolls (1970), Pink Flamingos (1972), The Cook, the Thief, His Wife & Her Lover (1989), Man Bites Dog (1992), Tokyo Decadence (1992) Showgirls (1995), Orgazmo (1997), Elles (2011) and Blue Is the Warmest Colour (2013). So, the pool of U.S. distributed first run films that are MPAA rated exclusively with its adult rating is extremely limited. Seemingly,  this averages out to be an once every four years event.

Which Is the Biggest Surprise of the 2023 Oscar Nominations?

How can you possibly give awards for "Best" in an artistic field? You can select a jury of any number of random people, anywhere, and they'd all give a different answer. It's like judging which beach has the correct amount of sand.