An interesting, bottom looking look at the list of recent popular movie titles that are united by their poor American box office results. Despite having big stars, talented directors and being critically acclaimed or were otherwise well-regarded; many of these films failed to crack the yearly top 250 of Box Office Mojo's top grossing domestic films. Some of the reasons for their lackluster US box office performance include extremely limited runs (1 week Oscar qualifying runs), no USA distributor (festival only showings) simultaneous video on demand release and streaming service co-distribution. More fundamental reasons may include a NC-17 rating, the impediments of a subtitle only foreign language release, English language titles (ie Lars Von Trier) that struggled initially to find a US audience and the marketing and other challenges of an independent release. Some of these titles only found later success through television broadcast, video rentals or via internet streaming. Poll suggestion combines the contradictory elements of poor box office results with excellence in just about every other success metric.

Editors, please, update the title and header to reflect the revised scope of poll?

I am always amazed when I see movies like, Equilibrium (2002) It only had a North American Box Office Total: of $1,203,794 in ticket sales, it barely cracked the North American Top 250 in box office receipts in 2002 @ #224. Yet, it has a decent cast with stars: Christian Bale, Sean Bean, Emily Watson and Taye Diggs and it was well received by movie-goers with a 7.5 IMDb rating. Plus, it post-box office results indicate it should have done much better, its ranks #16 of movies released that year in total IMDb votes with 289,718 votes. By comparison, the movies at #15 in IMDb votes, The Ring (2002)  with 290,494 in IMDb votes had a North American box office gross of $129.13M and at #14 in votes, Men in Black II (2002) with 300,974 in IMDb votes had North American a box office gross of: $190.42M. These comparison films literally did 100x better at the box office, making Equilibrium (2002) a great example of a 2000s Domestic Box Office Movie Dud. Even though movies like this happen all the time, I am never not amazed and always left scratching my head and asking why?

Idiocracy:The movie its distributor, Fox didn't want you go to theaters to see.

Idiocracy's original release date was August 5, 2005, according to Mike Judge. In April 2006, a release date was set for September 1, 2006. In August, numerous articles revealed that release was to be put on hold indefinitely. Idiocracy was released as scheduled but only in seven cities (Los Angeles, Atlanta, Toronto, Chicago, Dallas, Houston, and Mike Judge's hometown, Austin, Texas), and expanded to only 130 theaters, not the usual wide release of 600 or more theaters. According to the Austin American-Statesman, 20th Century Fox, the film's distributor, was entirely absent in promoting the feature; while posters were released to theaters, "no movie trailers, no ads, and only two stills", and no press kits were released.

The film was not screened for critics. Lack of concrete information from Fox led to speculation that the distributor may have actively tried to keep the film from being seen by a large audience, while fulfilling a contractual obligation for theatrical release ahead of a DVD release, according to Ryan Pearson of the AP. That speculation was followed by open criticism of the studio's lack of support from Ain't It Cool News, Time, and Esquire. Time's Joel Stein wrote "the film's ads and trailers tested atrociously", but, "still, abandoning Idiocracy seems particularly unjust, since Judge has made a lot of money for Fox."

In The New York Times, Dan Mitchell argued that Fox might be shying away from the cautionary tale about low-intelligence dysgenics, because the company did not want to offend either its viewers or potential advertisers portrayed negatively in the film.This theory has been given extra weight by Terry Crews, who stars in the movie as President Camacho. In a 2018 Interview with GQ Magazine he talked of advertisers being unhappy at the way they were portrayed, which affected the studio's efforts to promote the movie. He said, "The rumor was, because we used real corporations in our comedy (I mean, Starbucks was giving hand jobs) these companies gave us their name thinking they were gonna get 'pumped up', and then we're like, 'Welcome to CostCo, we love you' [delivered in monotone]. All these real corporations were like, 'Wait a minute, wait a minute' [...] there were a lot of people trying to back out, but it was too late. And so Fox, who own the movie, decided, 'We're going to release this in as few theatres as legally possible'. So it got a release in, probably, three theatres over one weekend and it was sucked out, into the vortex". In 2017, Judge told The New York Times that the film's lack of marketing and wide release was the result of negative test screenings. He added that Fox subsequently decided to not give the film a strong marketing push because the distributor believed it would develop a cult following through word-of-mouth and recoup its budget through home video sales, as Judge's previous film Office Space had.Mike Judge On The 10th Anniversary Of “Idiocracy” And Predicting The (U.S. Has Become an Idiocracy | Time.com

Suggested Introduction (intended to succinctly cover the poll premise)If you are an American or Canadian and saw any of these great films: You probably didn't see these films in a movie theater, as hardly anybody did. But, you likely regard them to be good enough to be worthy of the price of admission, based on your collective IMDb ratings.When "bad" movies go onto break a $100 million or more in domestic box office receipts regularly, it is hard to fathom how these "good" films couldn't do at least a meager $2.5 million in domestic box office receipts. Despite their poor results, every one of these movies eventually found a HUGE audience. They achieved wide spread viewership through VOD, pay TV, cable TV, broadcast TV, Blu-ray/DVD/VHS, media streaming services or another type of screening. Nonetheless, you are probably like me, scratching your head and wondering why these films didn't do better at the box office. 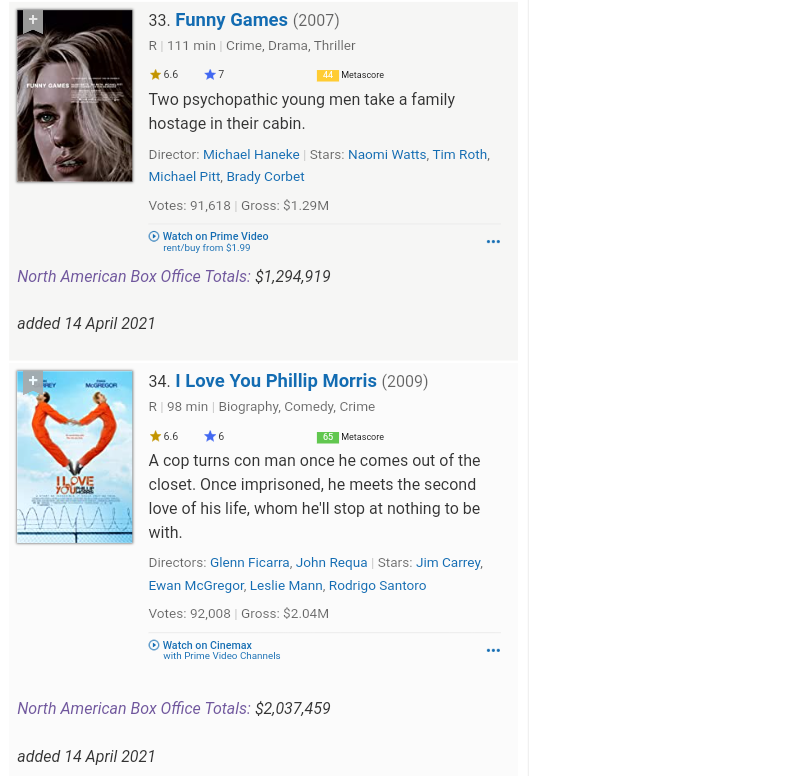