The keywords are already back on the title, presumably re-added by the same contributor who put them there in the first place.

I have seen similar things happen with the keywords on other titles listed in the Top 250.

Either someone is checking the keywords on these titles every single week, or someone is using botting software to keep checking and re-adding improper and irrelevant keywords after they are deleted.

Can you please look into who keeps adding the above-listed keywords to The Shining, and ask them to stop? 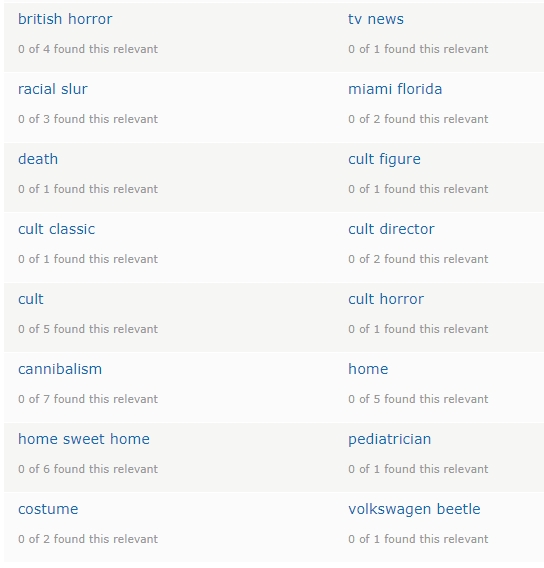 You will have to excuse my ignorance on the matter. Why are the keywords inappropriate? That may help me give the user who is adding them an explanation on why to stop adding them.

cult - This keyword should only be used for films with cults as a plot device. There is no cult in The Shining, and this keyword should never be used as a substitute for "cult-classic" or "cult-film." (Those keywords wouldn't apply either, as will be explained next.)

cult classic - The "cult-" keywords should be reserved for relatively obscure titles, per the dictionary definition of "cult," which is "of, for, or attracting a small group of devotees: a cult movie."  For example, Eraserhead (1977) and The Rocky Horror Picture Show (1970) are cult classics. Here is a good list and discussion of "The 40 best cult movies of all time." In the article, one of the things mentioned is that "occasionally, a film’s popularity will reach a tipping point that sees it outgrow its culty roots – The Princess Bride and The Thing for two."  If The Shining were ever a cult classic, it no longer is a cult classic today. It is just too popular to be considered a "cult" movie.

cult director - Same analysis for this keyword as for "cult-classic," and this keyword is even less appropriate. Stanley Kubrick is one of the most well-known and well-regarded film directors of all time. He is not a cult director. Besides, this keyword has way too much inherent subjectivity (which is not typically allowed in keywords) -- it probably should not be a keyword at all. If someone is a fan of Stanley Kubrick, they can find his movies without a dumb keyword like "cult-director."

home is a pretty vague and misleading keyword for The Shining, especially given that the main characters are only staying at the hotel temporarily. As noted on Wikipedia, "Kubrick's film focuses on domesticity and the Torrances' attempt to use this imposing building as a home which Jack Torrance describes as 'homey'". But it's not really a true home. Of all the keywords on my list, this is the one that is most potentially relevant. But a better keyword would be something like "temporary-home" or "living-in-a-hotel."

home sweet home - I have no idea why this keyword has been used -- it is likely just the contributor trying to be clever. The keyword has no relevance to the movie, and is even less relevant than the "home" keyword.

Based on the downvotes on the keywords shown in my screenshot, it looks like I'm not the only one who noticed these bad and irrelevant keywords. "cannibalism" has 0 of 7 votes as relevant, and "home-sweet-home" has 0 of 6 votes.

In the past, contributor @Skavau has suggested that once a keyword hits 0 of 4 votes in favor (or some threshold close to that), the keyword should simply be deleted from the keyword page. I think these keywords are good examples of the benefits of having a system like that.

Appreciate the explanation, I will proceed to delete the keywords and contact the user who adds them.

Unfortunately, despite our best efforts, the keywords in question are, once again, back on the title, along with the keyword "cult-figure," which I also recently deleted.

It looks to me like some contributor has set up an automated process that checks the keywords on this title once a week and then re-adds the keywords. Either that or they are doing this manually, but I think it's more likely it's automated. Either way, they either did not receive your email or they are ignoring it.

Regarding the keyword "cult-figure," here is the commonly accepted definition:

a writer, musician, artist, or other public figure who is greatly admired by a relatively small audience or is influential despite limited commercial success.
"at the time he was pretty much a cult figure, known only to a handful of art-movie buffs"

I don't see how any actor or character in The Shining qualifies as a cult figure--not within the plot itself nor in real life.

One or more contributors have been overusing and even abusing the "cult-" keywords. As a good example of that, one contributor or a small group of contributors insists on adding the keywords "blockbuster" and "cult-film" to the same titles, even though these two keywords effectively cancel each other out -- if a movie was big enough to be a "blockbuster," the movie by definition cannot be small enough to be a "cult" film.

And by the way, I have seen other situations with other popular films where a contributor appears to be adding improper keywords and then re-adding them later even after they have been deleted. Since some of the same keywords are involved, I suspect it is the same contributor who has been adding these keywords to The Shining.

What can be done about this?

p.s. Here is a link that shows there are currently 45 titles that share the three keywords "blockbuster", "cult-film", and "cult-figure":

I suspect if you were to look into it, you would find that a single individual is adding these keywords to all of these titles, either with one IMDb account or the same person using multiple IMDb accounts.

@keyword_expert​ I escalated the error of accepting them again directly, but actually it has been different users non-related every time. By auditing the keywords itself I do see one user who has added them the most so an outreach will be sent to see if this could help.

@Bethanny​ I think I know what's going on. I believe this is a Top Contributor who has been messing with the keywords for years, but he also has literally hundreds of "sock accounts" (I promise I am not exaggerating about that) that he uses to upvote his own keywords and reviews on IMDb. He has undoubtedly switched to using sock accounts for these particular keywords, to try to fool IMDb staff into thinking it is different people adding the keywords.

I really hope IMDb staff can put a stop to this. All of his sock accounts should be terminated. If I have the right person, the problems discussed in this thread are just the tip of the iceberg with this user. I could explain more but that would be better to cover by email.

Unfortunately, these keywords are back on The Shining:

@keyword_expert​ I am glad you found it, this was a processing error, but going back to the user who adds them, we reached out with coaching notes on why the keywords should not be added, since they keep adding them I have taken extra steps with the account. This should stop it from happening.

@Bethanny​ Thank you. I will also monitor the keyword sections of other titles where I have seen some similar behavior, and will let you know if I see this sort of thing again in the future.