Ratings: Your Ratings page should have all refine and sort options as custom lists have.

Yes It should have the Refine filter and all other options

This reply was created from a merged topic originally titled "Your Ratings" Needs Fixing.

The list of my own ratings of films  and TV episodes "Your Ratings" is almost useless. Apart from the loss of the compact view, there is no now way to narrow it to feature films, which means my lists are flooded with TV episodes. Any chance of making this feature more useful?

This reply was created from a merged topic originally titled "Your Ratings" Needs Fixing.

This reply was created from a merged topic originally titled "REFINE" button.

If you don't use Lists much, and don't relate to "Refine and Sort Options of Custom Lists", here's a list of moderate length (288 titles at the moment) for you to play with the Refine and Sort options:https://www.imdb.com/list/ls025185363/

This reply was created from a merged topic originally titled Why can't we categorize our ratings page on PC?.

In mobile application we can view our ratings history by categorizing as their sort or genre. So it's easier way to find a movie that already rated by user. But this option doesnt exist on Pc/browser mode. We can't categorize our rating history. We can just sort them by top rated or most recent. IT'S BS! It's too difficult when I am trying to find a movie that I've already rated and dont remember  the name of. Please make a refine tool like in the Watchlist page! Sorry for my English. 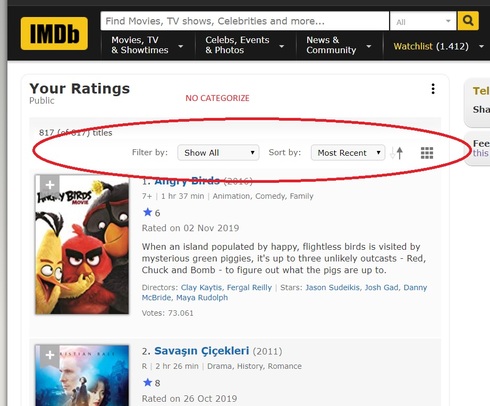 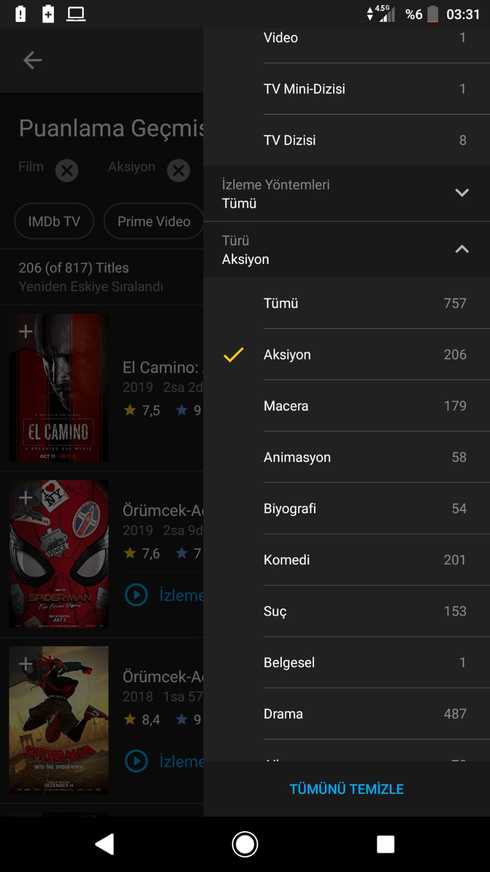 Still no update after 2 years?  The "Your Ratings" page should have the same sorting options and filters as the "Your Watchlist" page: 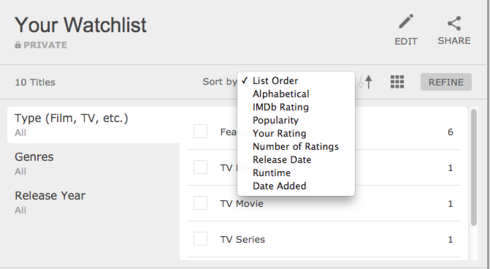 It would also be very helpful to re-add the Compact list view that is available thru the Advanced Search to both of these pages.

There are so many so many feature ideas that would manifest a net good if they existed, but which ones should come first? Can we even get faithful subscribers to organize a dialog on the matter let alone agree upon certain things?

good. did you actually _vote_ for the idea above?

It's so annoying how they just refuse to do this, although it should be such an easy thing to change. Especially since this feature existed until a few years back and was removed for no good reason at all.

And the "you can do this with advanced search" answer is not even worth the energy it takes to type it since that doesn't allow me to see if a friend of mine has rated a specific movie.

But they won't have to create a new feature. They just have to give the "All Ratings" list a feature back it already had in the past and that also exists in custom lists.

So it's not as if they had to start from scratch to create something new.

Generally I find it mindboggling how bad the IMDb interface is and how few features there are that motivate any interaction of the user with the site and/or other users.

If the Letterboxd database was as complete as the one on IMDb I would be gone without even thinking about it. That is literally the only advantage they still have over other sites.

Well, the appearance and functionality of the site as it would be through mobile devices plays a significant part of the motivation for the absence of decent features. That's really the extent of what I was pointing out.

This can be achieved via IMDb's Advanced Title Search feature.

Yes, sure. But that would be a workaround, not a solution.

Yes, that would be good.

This is available in all of my lists, but it would be helpful to be able to refine the 1000+ titles I've rated too. Is My Ratings not considered a list?

Note: This comment was created from a merged conversation originally titled Why is there no "Refine" feature in My Ratings?

You may want to vote/comment on this thread:

One of the indicators that Ratings is not a list: in Advanced Title Search, it's not among the lists you can include/exclude, as are Watchlist and Checkins.

@bderoes​ Dang, that's an old post... upvoted but not sure why this wouldn't be implemented.

@paulvansommeren​  There are two reasons for this...

One is that we are in the middle of a technology migration so it will be more efficient to migrate the ratings list into a true list when the list/ratings software is migrated.

The second reason is that a much more powerful set of filters for your ratings already exists on advanced title search so there's less need to priortise it.  Please see https://www.imdb.com/search/title/ and check the box "Restrict to Titles I've Seen" along with any other filters you wish to apply.  For more information on advanced search, please see https://help.imdb.com/article/imdb/discover-watch/using-the-advanced-search-feature/GLUEUYWPQNPTEVPU and for some example queries, see https://help.imdb.com/article/imdb/track-movies-tv/how-do-i-sort-my-ratings-by-the-title-type/G4LHN2ZSCPNM5W2S

@Col_Needham​ but advanced works only for own rating and even that is very bad. filtres are weak and they list a lot of noise and it displays only 10 titles per page when you have to dig through thousands. there's even no way to have address bar manipulations since every page is generated with a random address, no way to jump 100 pages ahead. and it doesn't include date rated. it's really faster to just import a spreadsheet and use any sheets software to sort it

but worst of all it is restricted to own ratings. no way to filtre my dawg's ratings or some other user's like some e-celeb or likes.

@Col_Needham​ Thanks Col, that's definitely helpful for essential cases, although usability-wise it's not all that straightforward. Just curious, how are you prioritizing potential features?