Im making up that threat for the case of very recently deceased celebrities.

Chrstopher Plummer just died on 02/05/2021. It's time to set up a respectful orbituary. Who wants to make it?

Thank you, Pencho. Is there still anyone who wants to make a poll? For a person of that honourable age & career, it should be a special poll. So I suggest one of the poll veterans to do it. The highlights of his life and career should be mentioned in the best kind.

Deaths in 2021
From Wikipedia, the free encyclopedia
https://en.wikipedia.org/wiki/Deaths_in_2021

I was saddened by the passing of Norman Lloyd, craziest thing is that I just watched "Foreign Correspondent" and it made me think of "Saboteur" and of Lloyd who was still alive, the day after I saw the film, he was dead.

Also I'm a big fan of "Look Who's Talking", a movie that defined my childhood and that I know by heart, it's sad that two cast members recently passed away in a very short span of time: George Segal and Olympia Dukakis.

I had nearly the same experience when it came to Sean Connery's death. I thought on him more and more often until it happened. By remembering I even saw some of his Bonds close before. Maybe you are the fitting poll writer for an obituary?

I didn't have a poll in mind, sometimes, I indulge to morbid thoughts and I ask myself, which actor's death would upset me the most... I wonder if it would be bad taste to ask a question like this: which of these actors who're over 80 do you most dread the news of their passing?

And my favorite actor is Al Pacino, so the day it'll happen, something will literally die inside me...

I just mentioned him, because it can be also some kind of coping with the dead of a beloved star, by honoring with an a obituary article. I often read that in newspapers when celebrities passed. A poll is a social platform similie of that. Some people can mourn on that way. Especially when they never had contact with the celebrities, except when they saw them on screen. I didn't want to upset people in a fun-way. People can remember celebrities by voting for their good work, their life's work. I see it as a kind of grieving.

Well, all of these people are eventually going to die, though. I'm going to die at some point as well. Y'all as well. These probably won't happen on the same day. Death is a certainty. However, I can suppose that the point is about how we'd feel if specific people died today or tomorrow, without information of risk of death being publicized in well in advance. Personally, I'm usually the most shocked by the deaths of celebrities who've not reach senior citizen age, and depending on the cause of death, I'm also disturbed. Inability to complete a project on account of death or permanent incapacitation is a serious problem, when it happens. I don't necessarily want people that I really like to live as long as possible, because if they should live a long time, then they should be very healthy (without chronic pain) during that time without the assistance of some kind of sophisticated medical apparatus. They also probably don't owe me anything. So, I toast to responsibility, completeness, good health, good luck and good karma!

If there is no one who wants to make an obituary poll, I would do.

Oh, no! He was so good In The Heartbreak Kid, one of the characters I most related to.... and it's sad day for Beethoven fans.

ElMo, can you please tell me a little about that role he had in The Heartbreak Kid? Please.

In that role, he played Lenny, a man who falls in love during his honeymoon with a younger and arguably more gorgeous or desirable woman than the more ordinary one he had just married.

Lenny is one of these

The film is also full of very embarrassing moments and Grodin gives a tremendous performance as the awkward Lenny.

Thank you, ElMo. I just remembered that I know this title only under the German title "Pferdewechsel in der Hochzeitsnacht", which is a totally strange German title. I didn't look at the English title when I've put this option on the list. It's currently option #4 on the list. I hope the text for the option fits. I use to take a short form for the voters, so they don't have so much to read. Especially when there are 20 or more options, it can be exhausting for some people to compare the options content for picking. You can surely tell me, if it fits in that short form.

I made a poll for Ed 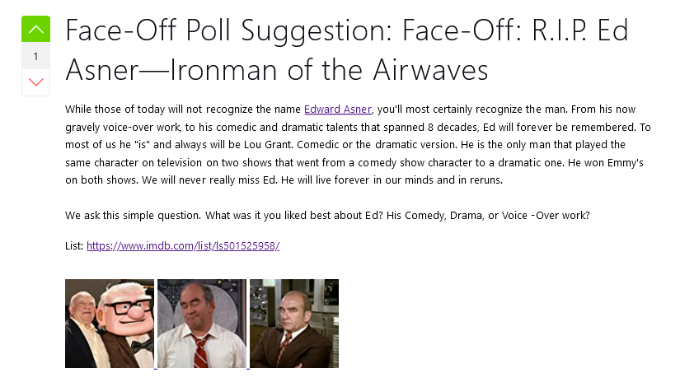 I guess we should give him the last honor.

The yellow press released it about 10 hours ago.

Here is a new one

Unexpected, although to be fair, we often never know what medications people may be on or what vices they may have.

Oh yes. I think you should tell his bereaved, so they can take better care for the rest of the family.

By whom is he survived, though? I know hardly anything about any celebrity.