These are some of the finest 70s and 80s rappers and rap gangs! They were a loud and proud sign of the new consciousness of black people on the east and the west coast. It was a must have to get their new album and be the one who got the record first.

Which of these guys and gangs is (... or was) your favorite?

(For a better remembrance I've linked their most significant track.)

Break it down here.

Should be present in the IMDb database. If not, please first add. If someone got images for the missing images in the options, please add and notice in the comments. I guess there are a few artists, I missed or didn't have on the radar, maybe I forgot some of them. So please tell me. When you make a suggestion, please add a YT-Video of the artists most sinificant track. The artist should have had a popular record release in the 70's or 80's. 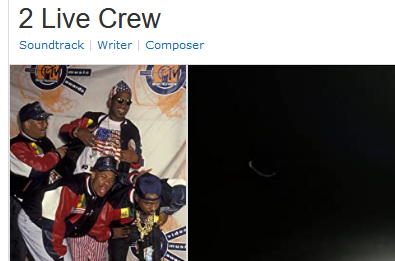 Jazzy & Prince: That's because the other gangs were much more significant.

From the NWA I've put Eazy-E and Ice-Cube on the list, because these two were more significant than any crew member of NWA.

Two Life Crew are truly 80s rappers, but they are always nasty like pimps. I want to remember the golden time of rap, when women not primarily were a sexual object for rappers. They are not really fine, just awkwardly over-sexualized. Same for Blowfly (died at age of 76 in 2016) and others like Bust Down, who was active in the 90s. Even NWA is close to that. I just let them count because the artists coped with their past and got serious business men today and Eazy-E already deceased in 1995, at age of 30. (very early. AIDS! guess he regreted some things in his life). Ice-Cube is an actor now.

I need some time to consider your suggestion, because my provider annoys me with his non functioning SMS-services. At the moment I have some stone to chew. ;)

I found a pretty good rap track of the late 80s from DJ Jazzy Feff & The Fresh Prince.

So I've put your suggestion to the list. The funny thing is, that I found another track on

my search, which I seemed to know, but from a female artist:

Dimples D made fun of it short after like in the example above.

When you look at it, she did that track earlier before in 1983:

Yeah that Sucks!!!
I picked rappers with pictures on their pages.

I know you did the best you could do and tried to bring up good examples with images.

The mere problem is that some of the best examples do have no image. And some of

the most popular do not realy fit. The subject is so special that I'm afraid not many people

will contribute. The other question is, how many people will find interest in it, if it really

goes live. I thought that rap is such a typical American invention, that there would be

more suggestions, maybe of people who rode the wave, like me as a teenager. But there

are not many, it seems. I guess that it is a dead horse for a poll ride.

It might be that rap in general was shady for many people. But last time I saw a young woman, maybe 25 y.o. who wore a RUN DMC t-shirt and I felt the spark like it was back in the mid and late 80s. In that times, I didn't understand English language, just rudimentary - but that wasn't necessary! It was the feeling that was transported through the beat and the voices. Today I would take it more distinguished, if hearing it first time by understanding more of the text.

But in the 80s, there was an independent radio broadcast, which had a programm between 01:00 a.m. and 03:00 a.m. o'clock and they always played the new funk/soul/rap-stuff from USA. That was miles away from the normal stuff each other radio station played. It was like epinephrine packed into beats and voices. Strong, Rough and real.

Found the single compact disc of DJ Jazzy Jeff & The Fresh Prince in my shelves.

It contains three versions of Summertime and the shorter single edit of Girls Are Nothing But Trouble. Didn't remember that I even bought that. ;) But I knew, that Dimples D with Sucker DJ is on the same shelves.

I look at Rap/Hip Hop and cannot stand today's brand of it.

While I listen to none of it today, I still listen to the oldies Rap.

But I diversify. Most that are into today's Rap do not diversify.

While 1 in 5 listen to Rap, they are outnumbered by those that diversify.

They are a greater percentage of the music listeners.

Also there are the people that listen to country and pop music. These two genre's are nearly identical. Just the arrangements vary. If combined they are more popular than Rap/Hip Hop.

So, only those who are into Rap will take the poll. The other 80% of IMDb users (depending on the demographics....maybe 60%) will just not be interested.

Seems like Hip-Hop and Rap still have a big impact on the market. How fresh are these statistics?

Well, I diversify, too. Rap is not the only music I hear. I do like classical music so strong. The old masters like Bach, Beethoven, Mozart, always get me high. But these are just the biggest. There are so many classical composers which rock it. Oh and yay rock is great! Love ACDC, Bon Jovi, etc. And of course the big black musicians like Scott Joplin, Louis Armstrong, Bill Cobham. And of course independent musicians like Sigfried Schwab & The Percussion Academia. And many other kinds of music. Music rulez! :D

I think that this statistic can just show how many people are interested in rap & hip-hop in general. If these people are poll voters is the other question. I can't predict how many of the poll voters are rap interested. When I look at Straight Outta Compton, which was nominated for 1 Oscar in the category best writing, best original screenplay in 2016, then I see that it just got 177.666 ratings (11/26/2020 06:26 a.m. MEZ). I guess this idea may collect some votes, but like in the peoples rights activists poll, or my Shakespeare villain-poll.

These gentlemen are significant artists for sure, but my heart is stuck to another genre.

However, if I had to make a choice:

I've put the Plácido Domingo option on the list for exact that case.

(It highers the vote-count) People who can't get something out of it,

still can vote. It's like the Betty White option for rap-polls. ;)

I didn't know you are interested in rappers. Why would you pick Ice-T

or LL Cool J, if I may ask? Did you hear their tracks?