The least exciting envelope reveal in Oscar's history happened at 1957's 29th Academy Awards ceremony in the 'Best Short Subject Cartoon' category, now known as, 'Best Animated Short Film'. All the nominees in the category that year were for the same producer, Stephen Bosustow, the same production company, United Productions of America (UPA) and the same theatrical distributor, Columbia Pictures. This was the only time in the history of the Oscars that all the nominations in a category were for the same individual. As a result, it left little suspense as to who would receive the Oscar when the card inside the envelope was finally read aloud.

The biggest surprise of the night was that the nomination sweep happened in the first place. Given the upstart animation studio, United Productions of America (UPA) had only begun its foray into theatrical animated shorts seven years earlier, the feat was even more impressive. Further, its distribution partner, Columbia Pictures historically had been an also-ran in a field long dominated by the animation divisions of Disney, Warner Bros., MGM, and Paramount. The nomination sweep was a true David vs. Goliath story, except that David had to defeat four Goliaths.

A convergence of a number of factors set the stage for this happening. Creative factors include a movement to push the boundaries of animation, a desire for artistic freedom, and rebellion against the dominant ultra-realistic animation, as well as, the advent of UPA's revolutionary style. Political factors include the worker rights' demands of the 1941 Animators strike, Disney's strike-breaking response, and the rise of McCarthyism. Competitive factors include the utter failure of Columbia's Screen Gems, and its black & white cartoon offerings in an industry where color was the norm, as well as, the expiration of UPA's government and industrial contracts. Economic forces include the rise of television, the end of Hollywood's Golden Age of Cinema and cost containment pressures that rewarded UPA's unique, sparse drawing style. This perfect storm of factors conspired to make the category that year, the least exciting and the biggest upset, both at the same time. The competitors that were shut out that year included these 1956 Animated Theatrical Shorts and a roster of iconic superstar animated characters.

Which of these Oscar-nominated animated shorts that were part of the least exciting envelope reveal, but the biggest upset contest in Oscars' history, is your favorite? 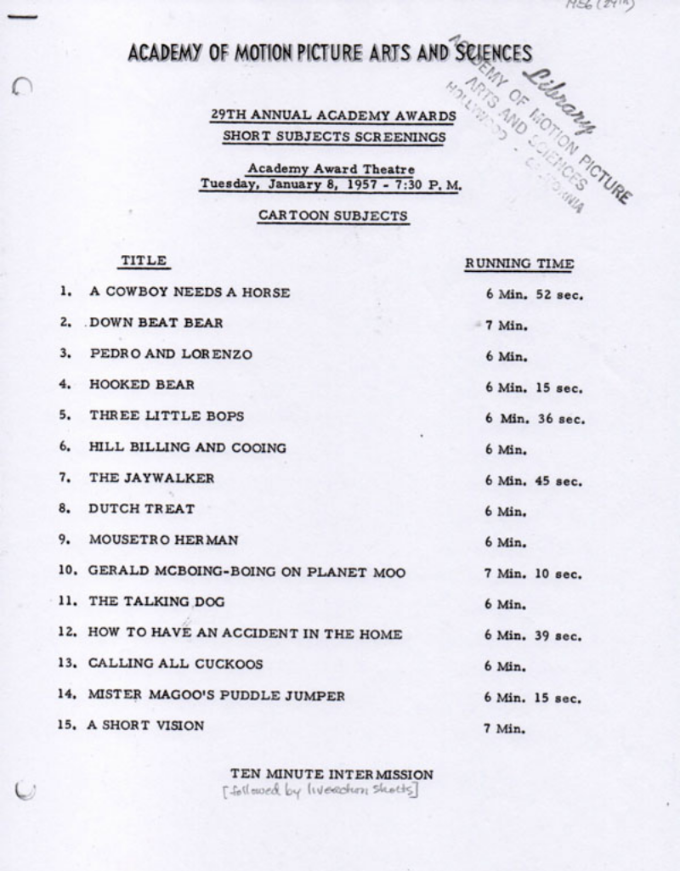 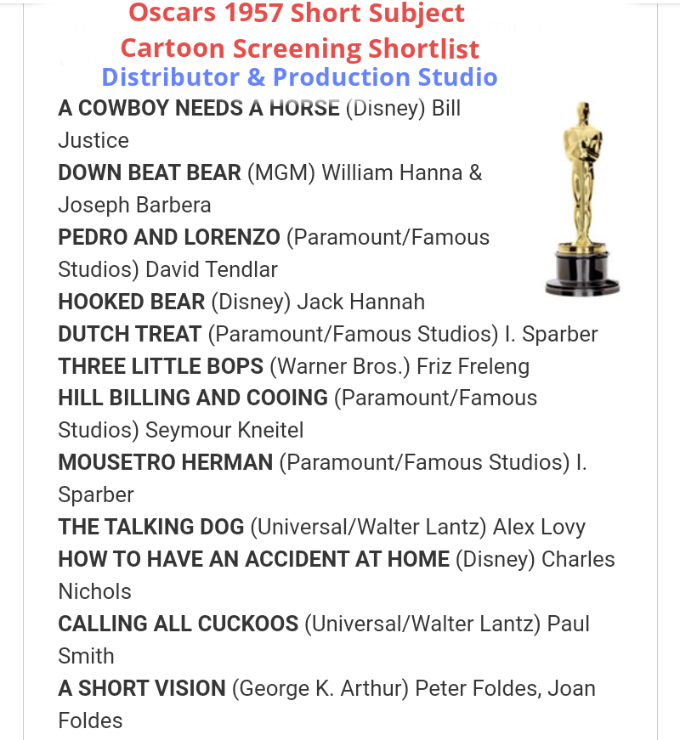 The competitors that were shut out that year included these 1956 Animated Theatrical Shorts and a roster of iconic superstar animated characters.

A really interesting story, I didn't knew about it.

Please move the discussion from question to the idea category so its easier to find it. Poll suggestions are located under idea.

@Pencho15​ I have moved to the idea column. Yes, I found it interesting too, although I suspect there is more to the story than we know.