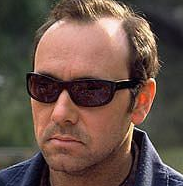 Poll Suggestion: You're Such a Karen!

The "Karen" personality became well known in 2020 . But in TV & Movies they have really been with us for some time..

Who's your favorite "Karen"?

For a definition on what makes up a "Karen", see here.

I am surprised. The ultimate Karen, the one who should top the list and win the poll, is missing.

Karen is a pejorative term for a white woman perceived as entitled or demanding beyond the scope of what is normal. The term is often portrayed in memes depicting white women who use their white privilege to demand their own way. Depictions may include demanding to "speak to the manager", being racist, or even sporting a particular bob cut hairstyle. A notable example was the Central Park birdwatching incident.

A History of "Karen" links

"I am surprised. The ultimate Karen, the one who should top the list and win the poll, is missing."

I had the same response, but for a different "Karen". I think Taryn Manning as Karen in Karen (2021) is a must-add. I would make her the final choice, since it might be considered unfair that she is even listed. You can read the plot summary here @ Wikipedia's Karen (2021) and you will certainly agree she is a "Karen" in every sense of the perjorative term.

But, she likely won't win anyways, because hardly anybody saw this BET TV movie (2.7 IMDb-rated, 2,500 IMDb votes). Unfortunately, I did last year. Two notable qualities about the film were its award nominations (5 Razzies) and it was so over the top, it might eventually gain a cult following due to its theme and its "so bad, its good" nature.

FYC, She didn't have any in-character photos in the movie's media gallery, so I added three for you to choose from, if you agree that she belongs in the poll. 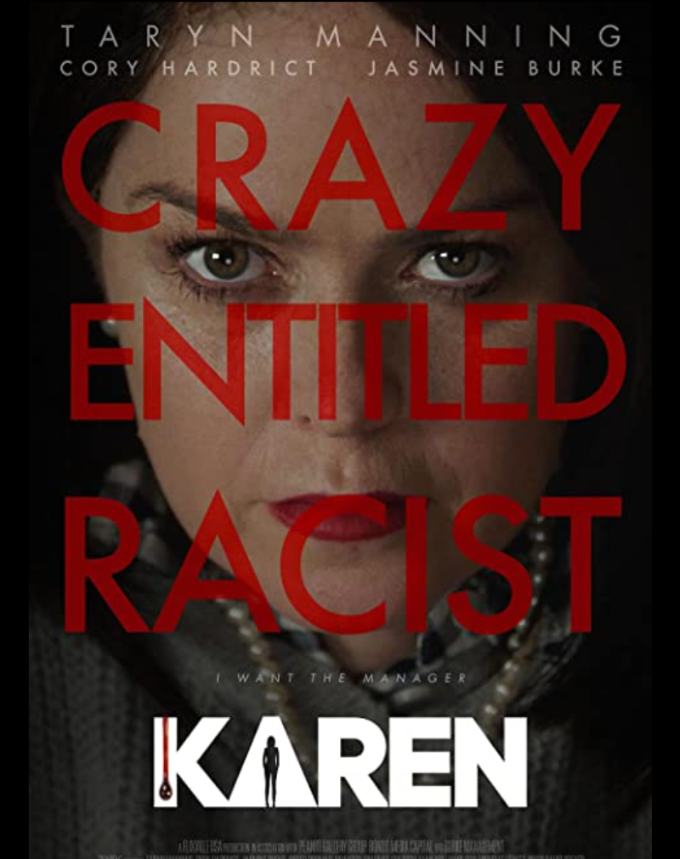 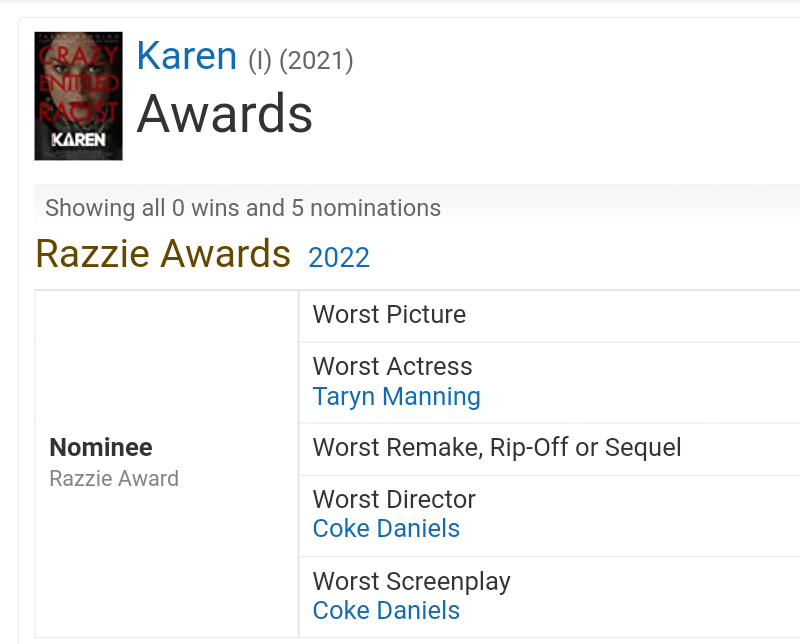 Been so long I do not rememner

- Change the Question to Idea. Thanks

Perhaps you could explain in one line what a karen is? I reckon not everybody is aware of the definition if it is a neologism...

I added your definition and Marcy

I didn't know about the word, but I guess the supreme example would be

and this one is for your consideration too

Hi, what about this Karen? Or that Karen? I tried to understand it by the German translation of the article. But I still don't know if they would fit. From the stand of feeling, I would say yes. Did you see the movie? According to your avatar, I'd guess yes. Btw. I admire Bryce Dallas Howard, but based on your idea and how I understand it, she is such a Karen in that movie. ;)

I'm gonna have to watch the movie to find out!

It's pretty funny and your avatar plays in it.

I was a Mary Kay Cosmetics Distributor a while back and because my name is Paxton one of my girlfriends started calling me Kay-Pax after the movie came out!!!! LOL

My first name is May!

Pax is also latin for peace. I have seen Kevin Spacey as Prot from K-Pax. But don't remember properly, just know that the question in the movie was, if he was a real alien or just nuts. Spacey also has the male lead in 'The Ref' in which the character I suggested played a repressive mother in law, which tries to get all the in-law-children under control by lending them money and then extorting them emotionally for it. She is one of the most awful persons I ever saw on screen. I do admire the actress for giving her performance and think in real life she must be a very heartful person - just a feeling.

Ill trust your suggestion. Amazon wants $3.99 to watch the movie!

So I added Baranski!

The mother in law in that movie was her. ;D

I guess no one has any more input? 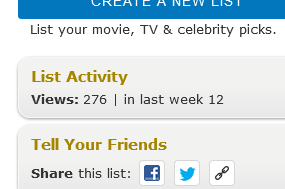 FYC, a suggested tweak to the introduction.

Poll Suggestion: You're Such a Karen!

In 2020, the pejorative term "Karen" became a worldwide pop culture phenonmen to such a degree that The Guardian  newspaper declared 2020 "the year of Karen". But, the "Karen" personality type existed long before then and has been a well-represented character in TV & movies for some time.

Who is your favorite movie or TV "Karen"?

For a definition on what makes up a "Karen", see here.

OK I used it

I oppose this as a poll. There are millions and millions of completely innocent women and girls in the world named Karen. They don't deserve to have their names maligned just because of some dumb, random meme.

And perhaps even worse, referring to malign people as "Karens" has the effect of anonymizing and even trivializing their behavior.

I think these are some of the reasons why IMDb has not made (and should not make) this a poll. It's time to retire these meme, which was never funny and always insulting.

Letter: ‘Karen’ meme is hurtful to those with the name

What about when your last name is McVeigh, Bin Laden, Hitler. Should they do what????????

We are all a little to sensitive at times.

Sorry, but my name is May. I was skinny growing up and was called May Pole. My parents taught me to not let things like that effect me. It did not.

Proper upbringing shields us. Not others sticking their "opinion" in to protect us. Bruised feelings protection is taught. Not censored by well meaning elitists.