As of 10 August 2017, these movies spent the majority of past twenty years or so listed on the IMDb Movie Top 250. Despite, their long time as fixtures on the IMDb Top 250 since its inception, these movies have been replaced by newer, more popular and higher rated options in recent years. Given, the nature of voting, the growth of IMDb Top 250 eligible movies listed on IMDb, the IMDb Top 250's widening international scope and the higher thresholds required to make the IMDb Top 250, the likelihood of a long time shadow movie reclaiming a spot in the Top 250 is slim. Source: IMDb Movie Top 250 Shadow 100

Maybe because both of these were essential for the Hollywood New Wave, I would rate Bonnie and Clyde (1967) or The Graduate (1967) the highest!

The reason is- most of the people that start their journey of watching films by completing IMDb top 250. They need to see these films to know their influence on the movies in future.

The Graduate is probably the consensus better movie, but Bonnie and Clyde was probably more influential on cinema. Both, are a bit of shock to be outside looking in on the the IMDb 250.

How did you choose which films to include? I noticed you omitted some from the original list.

Yes, I removed Stalag 17 and a couple others to the honorable mention designation. I wanted the initial poll answer option total to be closer to twenty-five than thirty-five. The list is derived from a pool of 100 movies on the Shadow 100, but I culled  the twenty-five movies that had the least recurrence, so the poll would remain current as those would be the first to be pushed out as new movies enter (see above FUTURE SHADOW 100 CANDIDATES (2-6 year projection). The remaining twenty-seven of the Top75 Shadow movies were  subjective choices: based on critical and popular acclaim, as well as, each movie's cultural, historical and industry significance. Also, I tried to have a poll answer assortment with broad appeal including mix of periods and genres. To some degree, the list mostly represents some the movies longest on the IMDB Top250 with nineteen out of longest twenty-five represented, but eight others with shorter reigns were included on their notable strengths.

This might be one of the most infuriating and saddening poll suggestions... I couldn't believe all these movies disappeared from the Top 250, they've always been part of the Top ever since I registered, I never thought it could be possible for them to be replaced... it might sound silly but i thought some movies were 'untouchable', apparently not.

Probably, a natural reaction to any list of long time listees that have fallen out of favor" It was my initial reaction, too. The Shadow Top 100 contains the titles that have disappeared from the IMDb Top 250 but have been on it longest. These are the titles with the highest recurrence." I fully expect some erosion in standing as time goes on as the pool of movies gets larger; but for some to fall so far, so quickly in the past twenty-five years is still a bit surprising.

On the other hand, maybe it's not as many older films may not have connect and be as relevant to more recent generations of movie-goers. Plus, twenty-five years actually represents a significant portion of time in history of film, to have 20% or 25% of the list change should be expected or be considered normal attrition. Clearly, part of the allure of the IMDb Top 250 list is that is not static, ever-changing and adapting to new tastes and new generations of film fans.

There's a sad irony when you look at the results of the voting: the ones that people would rate the highest (according to the vote totals) are all contemporary, post 2000 movies. It kind of confirms the logic of the shadow list ... really too bad.

Yeah, I'm not sure I would have included The Avengers because it was pretty common for a superhero movie to be propelled in the Top 250 right after its release and then to see its popularity fade. But I thought it disappeared much earlier. All the other movies spent at least ten good years in the top, some were there as far back as I registered.

Aside from being recent, The Avengers is also by far the most rated film on the list, meaning it's probably the most seen by IMDb users. It's a strong showing for The Exorcist, which is in second place so far, but only the sixth most rated on the list. 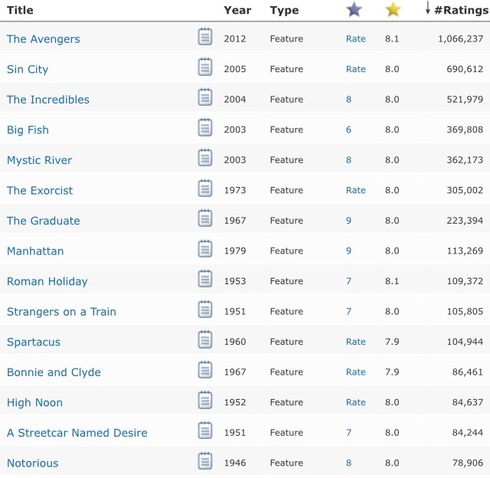 I would concur, the The Exorcist (1973) is the true winner here. Five of the top seven movies, The Avengers (2012), Sin City (2005), The Incredibles, (2004) Mystic River (2003), and Big Fish (2003) are newer movies and likely garner votes less because they better and more so because they have been widely seen among IMDb voters. IMDb voting on the whole and the IMDb Top 250 is influenced by users voting what they know and can identify with or is relevant to them.

Newer movies pushing better older movies off the IMDb Top 250 is likely a function of this as well. As the leading user generated top movies list, it his driven by popularity rather than greatness. It brings a perspective that has both advantages and disadvantages; appreciating it for what it is and not trying to make of more the omissions than what they are: great movies that are now less popular and less relevant than they once were. Still, it stings a bit to see some of these Shadow 100 movies, not included, I know they would be on my top 250.

These omissions of great, older movies are more indicative of the fact that they have been largely unseen by today's movie-goers, rather than indictment of their greatness or regard if they had been. As Peter points out, winning the poll is function of being widely seen: top 6 most voted movies on the list all made the six on the poll too.

couldn't agree more...it's sad how ignorant today's movie goers are when it comes to classics like 'the graduate', 'notorious', and 'the hustler'...of course the poll was gonna skew towards the more current features on the list...a list, by the way, that should have 99% of it in the top 250, replacing the garbage that popularity propels to the top...