Twin films and Triplet films are movies with similar plots or themes developed by different studios at the same time. Some of these movies result from capitalizing on the timely relevance based on recent events or an anniversary. Other projects are the product of a script being shopped at different studios at the same time. Finally, some films are purposefully developed to piggyback and capitalize off the big budgeted marketing efforts of a competing studio. Whatever the reason, the result is usually a mad rush to be the first studio to release their film version in theaters.

Favorite Twin Movie Offspring
Which of these similar themed twin movie groups developed at the same time is your favorite movie group?

Favorite Triplet Movie Offspring
Which of these similar themed triplet movie groups developed at the same time is your favorite movie group?

2018 Twin Movie List (courtesy of Wikipedia) U – July 22 2018 22 July 2018 Dramas based on the 2011 Utøya, Norway massacre. Love, Simon 2018 Alex Strangelove 2018 Both movies deal with the coming out stories of high school boys. They both include common tropes found in most high school movies- parties, drinking, drug experimentation, and unrequited love. Sink or Swim 2018 Swimming with Men 2018 Both are about a man who is facing a midlife crisis and joins an all-male synchronised swimming team.Upgrade 2018 Venom 2018 Both are films about intelligent symbiotes, which are attached to and talk to their human host, giving the human enhanced powers and abilities, but gradually take control of the host. Respective stars Logan Marshall-Green and Tom Hardy are also noted to be physically similar.Smallfoot 2018 Abominable 2019 Both are Computer animated films about abominable snowmen making first contact with humans and are both set in the Himalayas. Puppet Master: The Littlest Reich 2018 The Happytime Murders 2018 Dark comedies featuring puppets.Won't You Be My Neighbor? 2018 You Are My Friend 2019 Both films (the former being a documentary, the latter being a historical film) involving the work of Fred Rogers. RBG 2018 On the Basis of Sex 2018 Both films (the former being a documentary, the latter being a historical biopic) involve the life and work of Ruth Bader Ginsburg.I am using the title Favorite Twin Movie Offspring, Second Born to indicate this a part two poll.of the existing Twin Poll: After voting, take the First Born Twin Film Poll (No duplication of titles, in the econd born twin poll and includes more recent titles, as well as, many other notable titles)

Favorite Twin Movie Offspring: 2018/2019Twin Films: The Jungle Book and Mowgli Mowgli: Legend of the Jungle (2018) | Adventure, Drama | 3D theater release date is 29 November 2018 (limited) and its worldwide Netflix release date is 7 December 2018 (USA). It was in-development at the same time as The Jungle Book (2016), but experienced a number of delays that pushed back its initial October 2016 release date.Twin Films: Abominable and Smallfoot 27 September 2019 (USA)  Add, Abominable (2019) and its twin, Smallfoot (2018) to the  Favorite Twin Movie Offspring answer pool.Twin Films: A Quiet Place 2018 and The Silence 2019Both films involve the world coming under attack from terrifying creatures who hunt their human prey by sound. the plot of both focuses on family group fight to survive.Twin Films: Manikarnika: The Queen of Jhansi and The Warrior Queen of Jhansi (2019) Manikarnika: The Queen of Jhansi 2019 | Movie is the Hindi version, while The Warrior Queen of Jhansi (2019) Movie represents the British version of the same story. Both stories focus on Lakshmibai, the historic Queen of Jhansi who fiercely led her army against the British East India Company in the infamous mutiny of 1857.Notable Twin films (by year) Wikipedia

urbanemovies,My vote:Twin Films: Dr. Strangelove and Fail-SafeThese two films are some of my favorite films. They would make a marvelous double feature.

Good polls, Urb! For the triplet poll, perhaps add a comma after the second title of each entry? I think it might make it more clear what the titles are: For example, someone could think "The River and Country" is a title of one movie.

But again? Dan sat it as a poll 6 days ago. Why a second time?

Not a suggestion, but I just noticed this pair:

Definitely, a set of twin films. It seems various Harlow biopics had been in a development for over a decade before these two debuted. According to Wikipedia, "Film adaptations of Harlow's life were considered at different times during the 1950s. Twentieth Century-Fox had slated Jayne Mansfield for the role and ideas for Columbia Pictures actress Cleo Moore to play Harlow were also tabled. These projects never materialized. Actress Marilyn Monroe was given a Harlow script in 1953, however, she turned down the part of her idol, feeling it was underdeveloped." 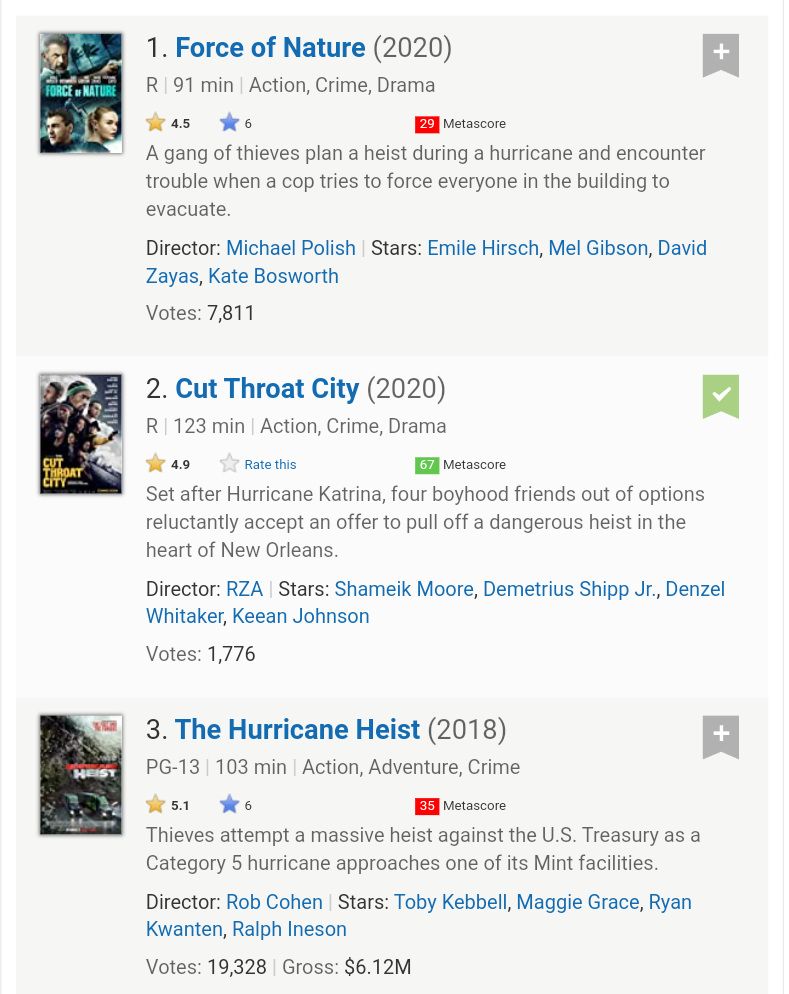