Poll Board members, please tell me which is the biggest Oscar snub in your opinion?Best Picture Snubs: https://www.imdb.com/list/ls094807044/(LIVE POLL)

I will contribute to this, but I need time to get my picks lined up!

It needs a lot of thought indeed. For best leading actor you have chosen Arnold Schwarzenegger in Aftermath. If you want to change your option let me know.

Thank you!
And... uh... I'd also like to change one more... just one more!
Best Leading Actress: Amy Adams in Enchanted.

Then I promise I'm done!

All the suggestions added

Defoe in Lighthouse is leading and he is already taken. Can you pick anyone else?

You apparently haven't seen the film. Robert P. is the lead and protagonist. Willem Dafoe is supporting. Even the studio thought so as that's also how they were FYC campaigning him. Robert Pattinson has far more screentime than Willem Dafoe.

Ok, since the studio think he is supporting let's add him in the supporting category. Now pick another supporting actor because Dafore from Lighthouse is already taken by Breumaster

No problem. et me percolate that one. Will be back sometime today with my answer. 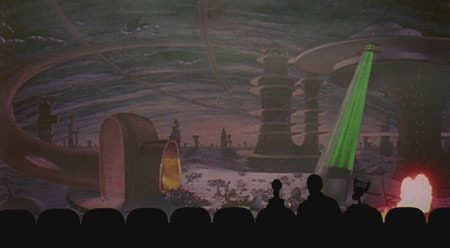 Look at the pathos he evokes in this scene. The Academy can be so cruel. Some may call them robotcist when they ignore great Robot-American actors.I'll go with ...John Goodman, 10 Cloverfield Lane

Yeah, maybe because I made the lists almost at the same time.

I am only intrested in these categories.

? ?  Alfred Hitchcock (I) (1899–1980)https://www.imdb.com/name/nm0000033/Director: Movie (58 credits)   https://www.imdb.com/name/nm0000033/bioDirected eight different actors in Oscar-nominated performances:Laurence Olivier, Joan Fontaine, Judith Anderson, Albert Bassermann,Michael Chekhov, Claude Rains, Ethel Barrymore and Janet Leigh. Fontaine won an Oscar for Suspicion (1941).- - -Directed four Oscar Best Picture nominees: Rebecca (1940) (which won), Foreign Correspondent (1940), Suspicion (1941)and Spellbound (1945).However, none of these are often regarded as among his best efforts by peers or critics.- - -  Though he was Oscar-nominated five times as best director, DGA-nominated six times as best director,and received three nominations from Cannes, he never won in any of these competitive categories, a fact that surprises fans and film critics to this day..

Hey so, how to find which films have adapted screenplay and which have original? 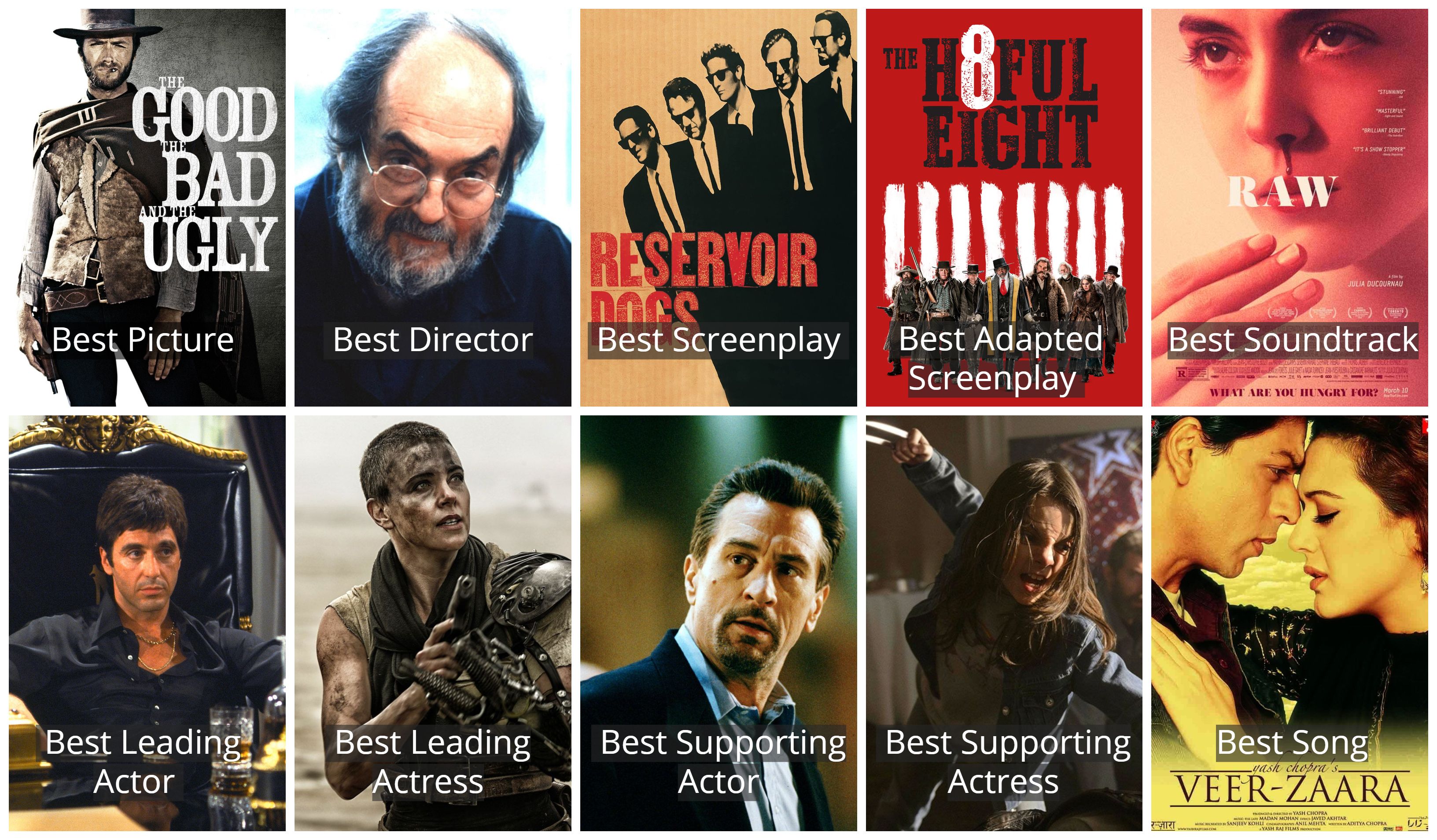 I don't believe Hateful Eight is an adapted screenplay. There was no original material (book, comic book, previously released tv series or preexisting film where the characters and/or story was carried over from). Usually, you can find the author's of the preexisting published material (or screenwriter's name of works made earlier than the work in question) under the writer section in IMDb or you can check the film's IMDb page.Sometimes, all it will say is characters by...; etc..

And what individual song from Veer-Zaara do you think should be nominated?

The Hateful Eight is Original Screenplay.

Stephen Atwood,Thanks for the info. Let me think of another film which deserves it.Also, they don't nominate the whole album? (I don't know since I don't watch Oscars; only on YouTube.)If that's the case, the name of the song is Tere Liye by Lata Mangeshkar and Roop Kumar Rathod.====Edit: The book is also by Quentin Tarantino. [ link ]

Heat is also considered an original screenplay, even though it's based on the pilot of LA Takedown. You should follow Stephen's advice and check the writer section in the film's IMDb page to see if there is any based on citation.

Did the Tarantino book come out after the movie? Those are called novelizations. They don't count when considering whether a script is adapted from another source or not.

In this case, according to an Amazon review? Hateful 8 is a published, bound script, not a novel.

Btw did I add the right song?

Paok-Kilkis,No. The name of the song is Tere Liye. I mentioned it above.

Thanks for adding them.

I second your nomination of Mads Mikkelsen, I hope that he wins an Oscar soon.


He is also very fan-friendly, for me it is a great quality even in his worse movies he achieves to impress me.

Btw you took all the categories except song. Don't you have a pick?

I can't remember any original song that was snubbed by the Academy.

Original Song: Name Your PoisonThe Return of Captain Invincible (1983)PS: I have looped this song almost all day. (With Christopher Lee is performance may be the only good thing of the movie.)

Best Score (honorable mention): Three Colors: Blue (at least it got nominated for a Golden Globe)

The Lighthouse and Stallone added

Bring up my polls

Best Picture: The Good, The Bad & The Ugly

Best original soundtrack: The Good, The Bad & The Ugly

For the three others I need a little time. ;)

Breumaster, the suggestions are about films or actors that should have been nominated (yet they didn't). The good the bad and the ugly for best picture and soundtrack are already taken, James Cameron was nominated for Avatar as Leon for Gilbert Grape and the Shawshank Redemption for adapted screenplay. Mother's original screenplay added to the list.