My current workaround is rating titles with 1 star, but that is certainly not ideal.

In my dreams, such an interface would have the title thumbnail produce a “watchlist or not interested” choice. Selecting the former would change the ribbon color to yellow as it currently does while selecting the latter would change it to red.

On your profile page there is a "Remove this title from recommendations" button.

@cinephile​ Yeah, I’ve seen that and it’s nice… certainly serves a purpose, but the user has little control of the Recommended section.  The problem, however, is that I have titles I want to mark as not interested. There’s no way to visit those titles and mark them.

@troywindhorst  We are interested in a little more detail on the suggestion here.  You have posted this in the iOS app category and the functionality you are requesting already exists.

We assume you are referring to the recommendations in "Top picks for you" on the app home page: 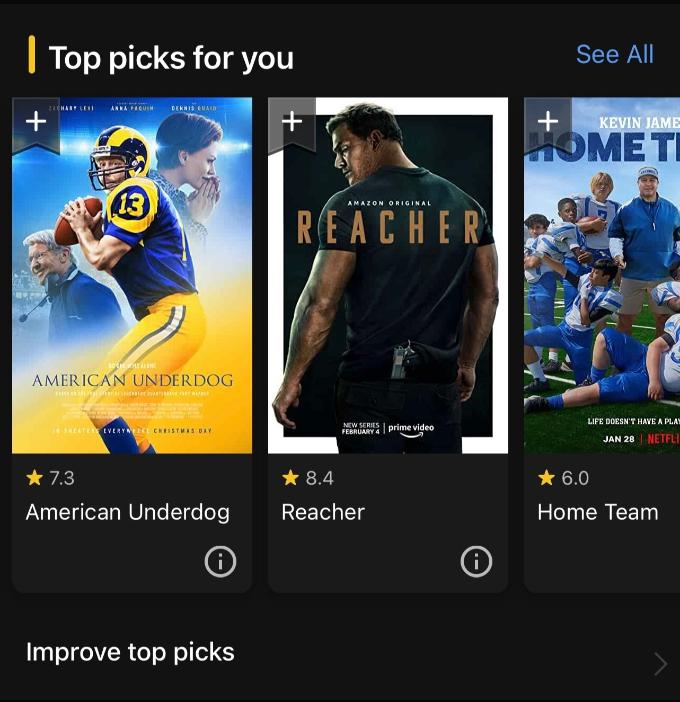 Under each title there's an "i" inside a circle.  If you tap this symbol, the feature to indicate you are not interested in the recommendation is in the menu which will appear: 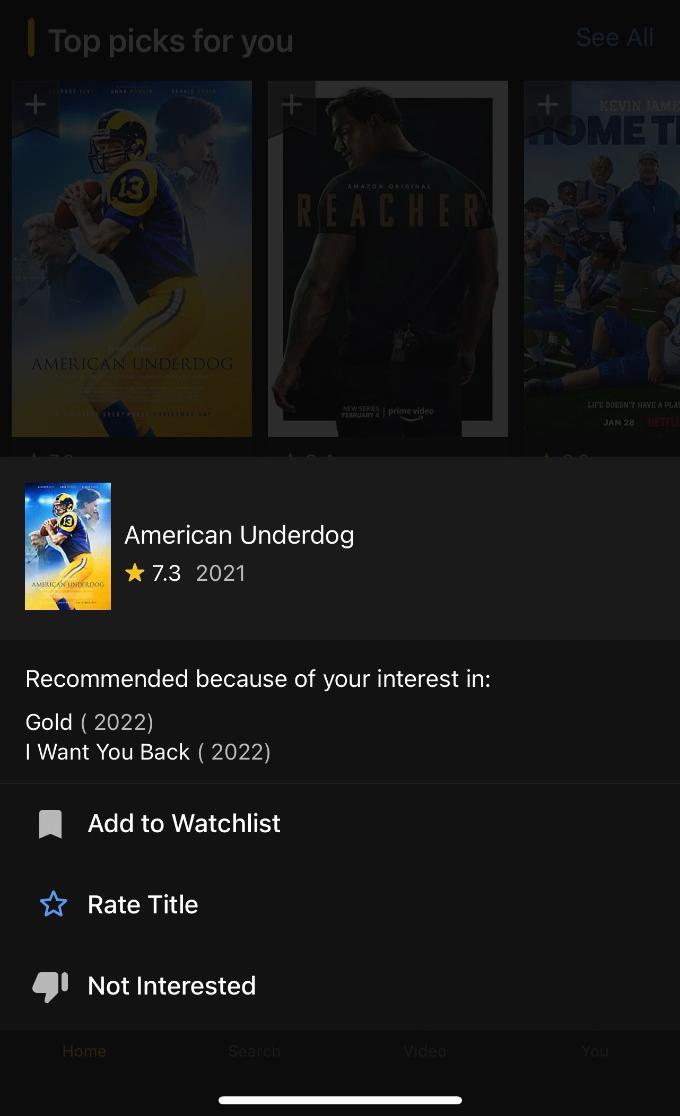 Note that we strongly advise against voting for titles which you have not seen as this will actually make your recommendations worse as well as interfere with the integrity of the ratings system.  Please visit the "Your Ratings" page in the app via the "You" tab in the menu at the bottom of any page; once on your ratings page, if you click the three dot menu to the right of each rated title and pick the option to rate the title again, there's a "Remove Rating" option on the pop-up menu.  Please remove the erroneous 1/10 ratings.  You can sort your ratings list by your rating so it is easier to locate the 1/10 votes.
If your suggestion is related to something else, please describe the issue in more detail and ideally upload a screen-grab to illustrate.  Thanks.

@Col_Needham​ The suggested-for-you section has its place and I appreciate its availability. I often use it.  In fact, it’s algorithms are pretty good.

My desire, though, isn’t waiting for IMDb to recommend a title so I can mark it as ‘not interested’. My desire is to lookup specific titles and mark them as ‘not interested’ and later know that I’ve marked it. SCENARIO (and this happens often):  A friend recommends a title or maybe it’s recommended on social media.  I lookup the title and add it to my watchlist. Later, I may spend 5-10 minutes reading reviews and watching a trailer only to discover that I did the exactly same thing in the past—and ultimately wasn’t interested in the title. Honestly, in a few years, I may do it all over again with the same title.

* Of course, title marked as ‘not interested’ should never show up in the recommended-for-you section.

* Bonus: Along with ratings, history, watchlist, my lists, etc. on the ‘You’ tab, titles marked not interested should be available here as a list because the user may want to review those titles.

BTW, the lack of my idea isn’t a showstopper because your iOS app (plus Android & desktop for that matter) is quite the powerhouse. It’s this media-junky’s favorite and most used app! Thank you for asking about this idea.

That list contains 282 titles.  First, I can easily see the titles I’ve seen because the rating shows on the thumbnail. I can also easily see titles that are already in my watchlist.  I can also sort by these indications. This makes it easy to weed out a number of the titles.

Next, I want to weed out the titles that I am not interested in seeing. Over the course I’ve my life, I’ve quite possibly seen all or most of the trailers for these titles… and likely determined I was not interested. Frankly, I don’t want to rewatch 100+ trailers again.  It would be so nice to have a “not interested” feature that behaved like the watchlist… displaying some sort of indicator on the thumbnail and being able to sort.

This probably isn’t an issue for novice users that visit IMDb occasionally for information, but for power users, being able to manage “not interested” titles is essential.

Thanks for reading this. Much appreciated!

@Col_Needham​ And another example. Sorry—I keep remembering reasons why this feature is needed. This one is quite the dilemma.

I watch a rom-com with my husband and let’s say I don’t particularly think it’s a good movie, so I rate it 4 stars. The problem is that I don’t really care for rom-coms anyway. So is my rating unfair?  This is something I struggle with. Imo, it would be more fair if I could mark the title as “not interested”. In the end, I want to leave my mark in some way… a mark that I can see, sort, filter, and manage at my discretion.

@Col_Needham​ I'm not seeing this "i" button in the web browser (windows).  Am I missing something?

@Gemzo​ On the web site home page at https://www.imdb.com/ in the “What to Watch” section, in the “Top picks” subsection the “(i)” is to the right of the trailer link underneath each poster.  Here’s how the section looks for me:

@Col_Needham​ I was in the "Top Picks" section, which you get to after clicking on "Top Picks" on the homepage.  Weirdly, those "i" circles aren't on that page:

I do see them on the home page, but the "What to Watch" page is a more useful place to bookmark and go back to. Odd that the info button is one place but not the other.