Have just watched Your Name I can see that one of the first plot keywords is upskirt. This is not the main feature of this film. What does IMDB do to stop the plot keyword being gamed?

Absolutely nothing, as far as I can tell. (I’m a user like yourself, not staff.)

For entering keywords, my philosophy is to enter items relevant to the plot, perhaps occasionally relevant to theme, and only those that are significant in my opinion.  I’m apparently in the minority, since many other users seem to dump a list of every single object visible in the film.  This makes the keywork list much less useful, I think, as does allowing keywords that are spoilers to appear on the main title page.

There also seem to be some contributors who are impelled, presumably to aid the prurient interest, to enter 37 different ways of expressing that someone has been naked, whether it’s significant or, more usually, not.  And there must be one or more contributors with fetishes regarding panty color, an attribute that is surely insignificant in almost any film (the original Christopher Reeve's “Superman” being a possible exception.)  None of this offends me, it just makes finding what’s relevant very tedious.

The only thing one can do to make things better, I guess, is for each of us to enter more meaningful keywords, then go back in and rate them as “relevant”, which helps move them to the top of the list.

Please note you can always submit deletions against any keywords that go against our guidelines here https://help.imdb.com/article/contribution/titles/keywords/GXQ22G5Y72TH8MJ5?ref_=helpsrall#

However if a keyword is not against the guidelines then it shall remain.

Thank you for understanding.

I am very, very glad you spoke out about this topic. Thank you for doing so.

I recently cleaned up the keywords on the title "Your Name," which is the title you specifically mentioned.

It turns out that all the sexually themed keywords were added to that title by an IMDb contributor whom I call the "leggy chick" keyword spammer (because "leggy-chick" was literally one of his idiosyncratic keywords).

You can read more about the "leggy chick" spammer here and here and here (on that last link, scroll down and look for my response comment).

Instead of the "leggy chick" spammer, we could also call him the "upskirt" keyword spammer, because he appears to be obsessed with titles in which women and girls happen to wear skirts or short dresses, and he has promoted his own personal sexual fetishes by adding dozens of keywords describing women's and girls' attire and their body parts to each title, and replicated this across hundreds of titles on IMDb, whether or not these keywords are relevant to the plot. I would estimate that he concentrates about 2/3 of his keyword spam on movies produced in Asian countries, particularly movies which include Japanese teenage girls.

One of his most egregious methods of "gaming" the keyword system (as you put it) is to use dozens of sock accounts to upvote his own keywords (and sometimes downvote other more appropriate keywords added by other contributors). Through this method, he is able to hijack the "most relevant" keywords listed at the top of each keyword page (and by extension, the top 5 keywords, which are listed on each title page). And he almost always chooses his prurient-themed keywords for this hijacking.

In other words, he is not satisfied with simply adding 40 sexually objectifying and uniquely subjective keywords to a single title describing the clothing and bodies of female characters and actresses; he also feels compelled to further promote his spam by using his upvoting method.  (Maybe we should call him the "upvoting upskirt spammer.") It is obvious that he wants everyone to see these keywords, to the extent that he will go out of his way to force them on everybody.

Before I cleaned up the keywords on "Your Name," I saved a screenshot, saved below. He used his sock accounts to add the massive numbers of upvotes.  You can see his upvoting in the numbers of accounts that supposedly "found" each keyword relevant.

First is the "before" screenshot: 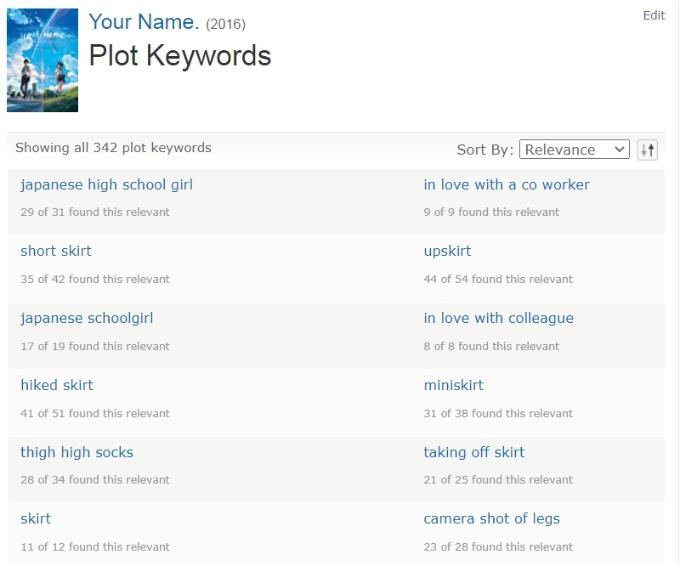 And next is an "after" screenshot showing the top keywords as they appear today (after removing his upvoted spam): 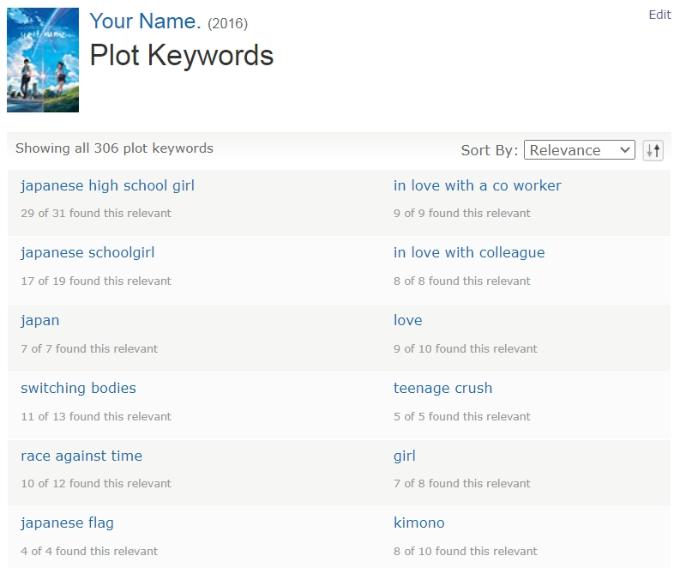 To date, IMDb staff have done very little to respond to all the keyword spam from this contributor. The least they could do would be to ban his subjective keywords like "legs-to-die-for" and "slender-attractive-woman." Some fellow contributors have been complaining about his keyword spam for years. But little action has been taken.

The good news is that each of us have the power to edit the keywords on each title. When you see the system being "gamed" like this, you can delete the keywords that have been inappropriately added, spammed, and/or upvoted. I have done a lot of that with this particular spammer.

Again, thank you very much for speaking out on this topic. I hope IMDb staff will pay better attention to this issue in the future.