I absolutely love the site. I cannot begin to praise how wonderful it is or how much it has impacted the hobby I have for watching movies or television. For example, I have found so many great movies through the Top 250 list, which has become a goal to finish for my significant other and me for the past year and a half. I am constantly referencing IMDb to find out more about actors, movies, shows, producers, and much more. Without this reference my experience with movies and shows would be heavily hurt; however, there is one major quarrel I have with the site.


When one goes to reference a television show to see who is acting in which role on the site, under the actor's name, the number of episodes that they acted in shows up. This is troublesome because it gives away how many episodes the character is in, which could give away whether or not they are dead later in the show. I ran into this when watching Game of Thrones (of course), House of Cards, and Breaking Bad. (SPOILER ALERT: GAME OF THRONES SEASON 1) When I went to check who played Eddard Stark, I saw that Sean Bean had only  acted in 11 episodes. This must have meant that his character dies or goes away after these 11 episodes.

This could be fixed by only showing the number of episodes only if you scroll over a "spoiler box" or if you put it on a separate page, like the character page or an actor's page. Either way, it has given up who has been killed off or removed from the show many times. I don't want to quit using the site as a reference for these television shows because of all of the great amenities and information that it offers. This small problem could be easily fixed.

Thank you very much. Keep up the great work and congrats on having a wonderful site.

This reply was created from a merged topic originally titled Stop putting the episode number next to the character in The Walking Dead (contai....

It's very easy to see character death or departure spoilers in TV show's pages as you're scrolling through, because the numbers of episodes and years the character was on a show, is listed right there on the main page. It's common to look up characters/actors while watching a series and this will often lead to you accidentally finding out a major spoiler, when you see the years listed.

It could easily be remedied by creating a roll-over or a click box that says 'more'...or 'episdodes & years'...then you can choose if you wanna see it or not.

This must have been brought up a lot, perhaps there is a setting I can change that does this already ? Let me know if there is.

This reply was created from a merged topic originally titled Stop spoiling me! (Episode numbers).

I would like for you to not disclose the number of episodes an actor appears in a series, as to avoid accidental spoiling. For example, I would need to look up the number of episodes on purpose. This has recently happened to me with "Wire in the Blood", where it appears that one of the "main" protagonists only appears for half the episodes as the other main protagonist. It sucks to watch the episodes and then accidentally go over the IMDb site and discover that.
At least give me an option to hide that deliberately. I mean, it would be nice, since now I'll be watching the series and expecting an accident to occur that will kill that character off.
Thanks.

This reply was created from a merged topic originally titled Hiding the amount of episodes an actor is in.

When looking up a series it is tantamount to a spoiler by being able to see how many episodes a character features in. If there are three series and a charecter is only listed as being in 12/13 episodes then it is obvious that the charecter is either killed off or no longer in the show.

This reply was created from a merged topic originally titled I'd like a way to disable the 'how many episodes this actor appears in' info from....

You know when you go to the IMDb page for a television show and in the cast summary section it lists how many episodes that actor/actress is in it for? Well, I'd like to be able to disable that - simply because knowing that information might inadvertently spoil the show for me.

For example, let's say you were recommended a four episode crime drama mini-series that follows two protagonists. You check out the cast section because you want to see who else it features, and as it just so happens you notice that one of the main characters is only it for three out of the four episodes.

Or perhaps you're watching a new drama series on TV and you see a familiar face, but you can't pinpoint it. Well, you go to see who it is.. and you notice that he's only in it for what seems to be the first season.

Sure, there are a lot possibilities as to why these people aren't in the entirety of the show.. but I, for one, would like to remain ignorant just in case I do happen to be right that one time.

Anyway, thanks for taking the time to read this!

This reply was created from a merged topic originally titled When you DON'T want to know the number of episodes an actor has been in.

Sometimes I watch a somewhat older series (The Wire, for example). I like to go on IMDb to find out an actor's name or what other shows/movies s/he's been in, however there are times when based on the number of episodes it shows that an actor has been in, it often causes me to find out that a charter isn't going to be on the show much longer. It ruins the surprise of the character being killed off, etc. It would be nice if a visitor to the website had to click on something to find out the number of episodes a character has been in in a particular series.

This reply was created from a merged topic originally titled Add option to hide how many appearances an actor made in a series..

I wish the IMDb app didn't show how many appearances an actor made in a series. It gives away when they are going to die or leave the series haha. In Line of Duty, I knew the main character was going to die in the first season, as the app showed he only appears for 6 episodes! :(

When you browse the cast list on for example a TV show, you get shown the amount of episodes an actor has participated in. I think this should be hidden by default since it spoils which character has quit/died, especially if the TV show has multiple seasons and you are looking up a lead actor.

Below attached proposal how it could looke like, as is today and with hidden by default: 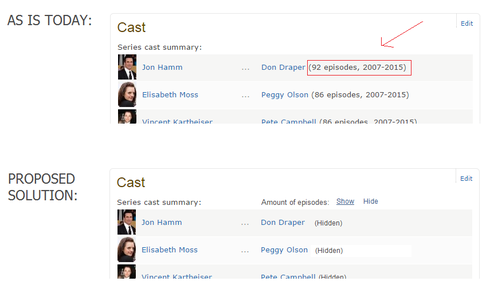 In addition, this could be something that you can set up yourself on your profile.

This reply was created from a merged topic originally titled Remove how many episodes the character was in..

Having the number of episodes next to the actors/characters name is a massive hint/spoiler that those characters are going to be killed off or leave the show.

For example, if the show has aired 20 episodes and a main character only has 17 then this could be a potential spoiler for new viewers.

This reply was created from a merged topic originally titled Hide display of number of episodes an actor has been in the series.

Display of number of episodes an actor/actress has been in a specific series should be hidden as it sometimes can hint death/departure of the actor from the series if the # of series episodes >> than # of episodes that actor has been in the series. Spoilers ahead for Dexter...For example, Julie Benz has been in 49 episodes and Michael C Hall in 98. There should be a button to reveal the numbers if the user chooses to.