The Guideline is very clear:

Keywords submitted to the TV series page should be relevant to and describe the entire series. Keywords that are specific to a particular episode should be added to that episode only.

Yet, keywords are still accepted at the episode level that belong ONLY at the series level, and are duplicated for episode after episode.

The same 13 keywords that exist for all 52 episodes ONLY belong at the series level.  This results in 676 incorrect keywords.  (I have submitted deletions -- a very time consuming project.). Please contact the original submitter for the above title and inform that person of the mistakes so that they do not continue.

Keyword list manager(s) should flag all submissions of episode keywords (especially orginal submissions) to make sure that they DO NOT duplicate each other, and do not include keywords that should ONLY exist at the series level.

I know that keywords are a low priority, and that all IMDb staff members are probably overworked, but... sometimes I feel like an unpaid staffer who is doing the work that should be done by the paid staff.

I would gladly come to Bristol for a couple months to work on establishing some kind of process where contributors are informed of the need to comply with Keyword guidelines.  I'll pay for the flight.  Just give me a place to live and a small per diem salary, and we could solve this problem.

It is easy, perhaps too easy, to add keywords to many/all episodes of a series by selecting the episodes in the series-level update form. Maybe the help message displayed could mention the series/episode issue and state that episodes should not be selected if a keyword applies to the whole series.

A specific concern would be an anthology series, where a specific keyword may appear in many episodes, but should NOT be a keyword at the series level since each episode is a self-contained entity.

For those keywords tha "only show up in certain episodes," including anthologies, that keyword should appear in each of those specific episodes.  A keyword can appear in several, even many, episodes without being a keyword at series level.  Some perimeter would need to be established.

That  staff of five or so people is us, the contributors.  Some people have such inclusive, expansive knowledge of certain series that they should be the "experts" on those series.

I've contacted the user responsible now and explained the policy. I agree that the message in the submissions interface should include that point. I've added it now which is already live.

I'm not sure exactly what you added at that time, but it seems it has been lost in an update of the update form's tips feature.

Phil Boroff was completely misconstruing the guidelines in this post. I explain more here, here, and here, but the short explanation is that the guidelines do not prohibit a keyword from being added at both the series level and the episode level, so long as the keyword is relevant in both instances.

There are only two relevant sentences in the guidelines. Neither sentence says anything about duplication between the series level and the episode level:

Keywords submitted to the TV series page should be relevant to and describe the entire series. Keywords that are specific to a particular episode should be added to that episode only.

The final point I will make is that not only do the guidelines allow keywords to be posted at both the series level and episode level (so long as they are relevant in both places), this also facilitates searches. When searching on IMDb for titles with combinations of multiple keywords, there is no way to mix and match keywords from series levels and episode levels in the same search. In other words, if you want to find an episode that contains three specific keywords, you will need all relevant keywords to be in that episode, or your search will not retrieve that episode. To prohibit a relevant keyword from being added to an episode (just because the keyword is also relevant at the series level) would completely interfere with and devalue the effectiveness of these searches.

In short, the policy is clear: keywords can and should be added wherever they are relevant.

I'm not sure exactly what you added at that time, but it seems it has been lost in an update of the update form's tips feature.

I may have figured out what Will added at the time (three years ago). I will explain using an example. 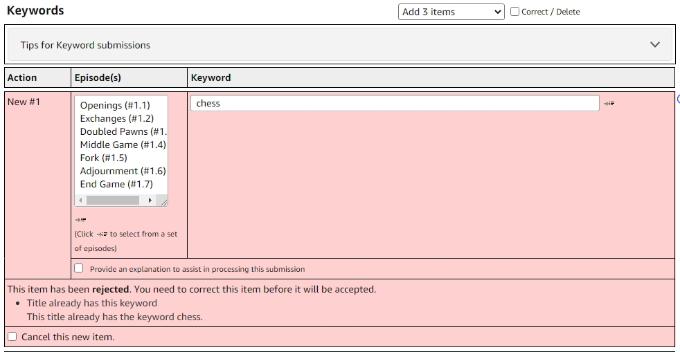 It reports this error message:

This item has been rejected. You need to correct this item before it will be accepted.

That error message is probably what Will added three years ago. It blocks you from using the series form to repeat a keyword already at the series level on the episode level.

With that  said, I also tested adding the keyword "chess" to an individual episode of "The Queen's Gambit" using the keyword editing form on an individual episode page, and it worked just fine. (And sorry to repeat myself here, but adding the perfectly relevant keyword "chess" to this title, at the series level and/or to any and all episodes, is fully consistent with both the guidelines and dictates of common sense. I have yet to see a single policy argument otherwise.)

As best I can tell, the IMDb staff were concerned about the use of the series editing form to add keywords "in bulk on all episodes of a series" (as Michelle explained in one of the threads). That appears to be why they blocked the ability to duplicate keywords via the series form, but kept that ability open via the episode form. This makes it a lot harder to mass-duplicate keywords, but still allows the ability to duplicate keywords manually if they are relevant and the contributor is willing to work a lot harder to make the edits. The staff have purposely set this up to encourage contributors to visit the individual editing page for each episode and really think about the appropriate keywords for that episode.

This actually makes sense to me. I can see how there is a potential for abuse, e.g., using the very powerful editing tool available on the series page to mass spam irrelevant keywords to multiple episodes.

I would hope that staff would back me up on this. It would defy logic to prohibit adding the keyword "zombie" to an episode of "The Walking Dead," or the keyword "chess" or "female protagonist" to an episode of "The Queen's Gambit," just because those keywords are relevant to both the series as a whole and to every individual episode. There would be no basis for such a policy, and it would severely hinder keyword-searching functionalities under the current keyword structure, which is probably why we don't see anyone even trying to advocate for that result at this point.

Haha. I could've sworn that I pointed out something to that effect, years ago.

Haha. I could've sworn that I pointed out something to that effect, years ago.

Can you please be more specific? Are you agreeing with something that I (or someone else) said in this thread?

Yes, particularly concerning the search results by keyword for episode type title pages that belong to a series type title page. In fact, absent an investigation or a simple check, I'm still wondering whether or not the search results automatically include references to episodes when the corresponding series has given keywords but the episodes do not, much like inheritance of "prototype" properties in object-oriented programming/scripting language implementations.

I'm still wondering whether or not the search results automatically include references to episodes when the corresponding series has given keywords but the episodes do not, much like inheritance of "prototype" properties in object-oriented programming/scripting language implementations.

I can assure you that IMDb's search system treats titles at the series level and at the episode level completely separate. In other words, a search result for a series will not borrow or inherit keywords from an episode, and vice versa.

That fact is a significant reason why it would make no sense for IMDb to prohibit listing a relevant keyword at *both* the series level and the episode level.

If Mr. Boroff were still around on this forum, I would challenge him to explain three things:

1. If a keyword is relevant both at the TV series level and to a specific TV episode, how exactly would it be inconsistent with the guidelines to add that keyword in both places? Which exact words in the guidelines is he relying on to get to this interpretation?

2. Setting aside the plain language of the guidelines, what would be the policy rationale for forbidding a keyword from being added to an episode even if the keyword is relevant to that episode, just because the keyword is also relevant to (and has also been added to) the series as a whole?

3. Assuming he can come up with any policy rationale for forbidding a relevant keyword from being added to an episode just because it is also relevant to the series as a whole, does he believe that policy rationale outweighs the fact that such a prohibition would interfere with the ability to find relevant episodes via keyword-specific searches on IMDb?

Will has already explained in another thread that it is perfectly acceptable to add a keyword both at the series level and to individual episodes (or even to all individual episodes), so long as the keyword is relevant in all places where it is added:

We see no issue with keeping the keyword at the series and episode level, as long as it applies to both.

That summarizes it perfectly, and that is exactly what the guidelines already allow. End of story.