Why I can't change the "IMDb display title" for Taiwan to Chinese language?

I submit the Official Chinese title of 10 movies as "IMDb display title" for Taiwan, but the data editor who can't read Chinese said and refused me twice.  In last ten years, I've done this for more than 1,000 films and most time it works. And I've offer links of posters or official data form film company or Taiwan Government to prove those 10 titles, but...

If you can't read the Chinese title on the movie poster just on IMDb.com (I think that trying to recognize the graph of Chinese Characters is not difficult), you should find someone can read to work as a editor instead of wiping out my efforts. (IMDb is the largest Movie database in the world. If IMDb could find more foreign volunteers to work as editors like Goodreads, the database will work better.)

P.S. Why is Chinese "display" title for Taiwan necessary? (Only in Taiwan, not your "English" world!) Because our language have a lot of homophones and tones, using pinyin to display the title is not accurate, especially for Taiwanese films (or even all the Chinese language films). 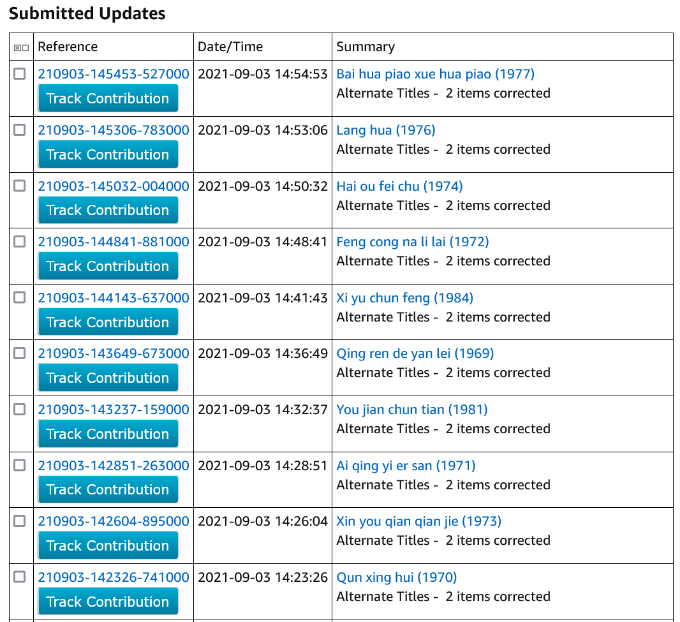 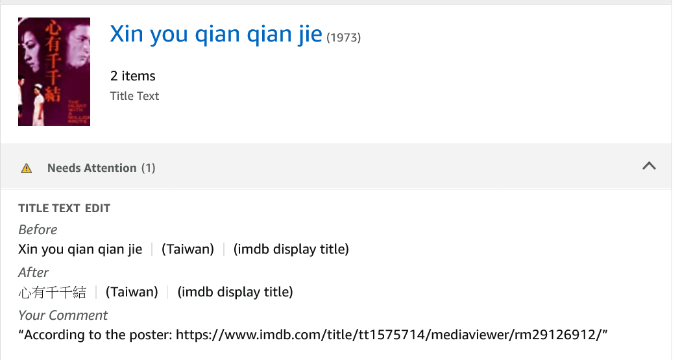 Can anyone here can help me? Thanks a lot.

Can anyone here help deal with the problem?

I reviewed these Alternate Title updates and can see that they were declined because the title you were updating was instead added as a separate alternate title with the "Poster Title" attribute.

If the alternate titles you were trying to remove were incorrect, I encourage you to re-submit and clarify the error within the "Explanation" field of your submission.  For example if the listed "Taiwan" display title is actually a transliteration, you can modify the attribute for this listing.

Additionally, we do allow the listing of alternate titles under the country "China" and under the language "Chinese".  If you are having difficulty making any changes between country/language, let us know the details and we can assist further.

@Michelle Thanks. Because some movie pages already have "pinyin" ( a romanization system for Mandarin Chinese) display titles for Taiwan and data editor refuse me to delete them or change them to alternate titles,  I can't add new Chinese titles for them. ( Those pinyin titles might add before IMDb allows Chinese titles.) Therefore, I tried to add Chineses title with switching the pinyin display titles and the Chinese alternate titles for Taiwan.

AGAIN! You are ruined our efforts!

IMDb started in 1990, 32 years ago, before Unicode started in 1991 and long before it became well-supported by operating systems and web browsers.

With a huge database that's constantly being modified, the staff can't just choose something from a menu and make the whole database Unicode.

Over the decades, IMDb has added support for Cyrillic, Japanese and Devanagari script, if they're used with the Country/Language and Attribute set to specific things.

IMDb does not yet support titles in Chinese script, not as primary titles nor as alternative titles. I expect full support for simplified and traditional Chinese will be next to come, but if you thought it had already been added then you're mistaken.

I suspect you may have been confused by how some Chinese-character titles have been added already, but this is because they only use characters that are also used in Japanese script (which is currently supported).

IMDb currently won't allow Chinese titles to be submitted if they use any characters that are only used in Chinese and not Japanese.

This isn't intentional (people shouldn't be submitting Chinese-character titles at all, because they aren't officially supported yet) but just an accidental side effect of adding Japanese compatibility before Chinese compatibility.

All of this has nothing to do with whether or not IMDb staff can read Chinese or any other language, it's to do with how difficult it is to add support for different scripts to a database as old and vast as IMDb and how long that takes.

And I doubt that there's any racism or nationalism in the order that IMDb has chosen to add support for these scripts; they appear to have chosen them based on the number of movies that there are in the database with titles that would be originally in one of these scripts.

Though there are more Indian and Chinese movies and TV programs made nowadays than Japanese ones, through much of the 20th century Japan produced the second-largest number of films each year, after the United States. And Japanese content is much better represented in the database than Chinese content; often when I look for a Chinese movie on IMDb I find that even major ones being released very soon are not in it and I have to add them myself.

Pointing out the lack of full Chinese support in edits or on this support forum, no matter how many times it's done, is not going to make it arrive any sooner. And it might even get your posts removed as spam because of their repetition. Being rude to staff is especially unlikely to get them to help you. The only thing that will make it happen is to wait for IMDb staff to get it done.

When compatibility is added, it will probably be announced in this support forum and rules for Chinese titles will be added to the rules for non-Latin scripts.

Until then, all Chinese titles should be entered as romanizations, whether they're entered as primary titles or alternative titles.

Primary titles will always need to be entered as romanizations, even after Chinese script compatibility is added. Years and Roman numerals in parentheses after the title will be needed to distinguish between different titles with the same romanization.

This isn't ideal; it's not how a database of movie information would work if someone were to start one today with an worldwide perspective and Unicode support throughout from the start. It's a result of how old IMDb is, not an intentional choice to make things difficult.

IMDb doesn't give rules for which systems to use, but I guess for consistency with other sites such as Wikipedia one should use Pinyin for Standard Chinese and Jyutping for Cantonese and these rules for spacing and capitalization.

But, unlike on Wikipedia, one needs to leave out all tone marks because the ancient text encoding system cannot handle all of them and it would be inconsistent to only include some (but keep the ¨ on the Pinyin ü, which is not a tone mark and can be handled by IMDb), and only the first word of titles and proper nouns should start with a capital letter (see the mention of Mandarin and Cantonese in the title formatting rules).

No matter it was “Japanese script’s By-products“ or others. It is happened and it is for more than 2000 “imdb display titles” for Taiwan or HK since 3 years ago. We don’t asked the database to use it for the main title (I submit the titles with pinyin), it is only use as “altetive title” display in Chinese-used countries.

Maybe you can easily wiped the official Chinese-language titles we added. Cancel them. Please Do it as soon. However, the database are supported by us , volunteers. You should be happy to have us, not think we are “rude”. I’ve wasted my time for the database to make it better, more useful, not for myself. Besides, I don't use any "bad language" for the time we ( volunteers who use Chinese languages) wasted.