when should multiple roles be listed in imdb credits

I have a question cuz of multiple titles I've seen.When should an actor have multiple roles shown in the credits? In help it says "If a cast member is listed more than once in the credits" which implies that the show's actual credits list them more than once (at least that's how I read it).https://help.imdb.com/article/contribution/filmography-credits/cast-acting-credits-guidelines/GH3JZC...
My question is what if the actual show credits do not list the multiple roles, but the actor did act as multiple "characters". (This is a bit amorphous because it can span someone with make-up and looking very different to they look the same but are supposed to be a different character.)

In the example I'm going to ask about, the actors acted as a different person but without any different make-up. I can't say for certain, but I'm pretty confident, they were not credited in the second role in the onscreen credits.

So should they be listed with this extra name/role? 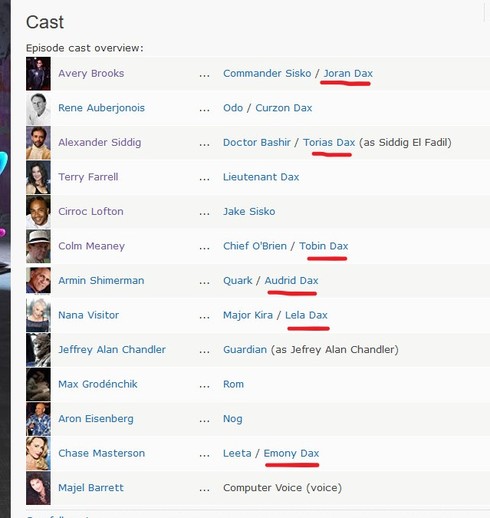 Part of the reason I'm asking is because of a trivia item for one actor saying they acted in the second role which to me is redundant, but I'm wondering if these 2nd roles weren't listed at some point.

An interesting question with no easy answer that I know of.Split into two parts, we can say that if a character name is included in the on-screen credits, then it can be listed. And if an actor/character is seen on screen but not included in the credits, they can be listed with the character name and (uncredited). But when both of these cases apply at the same time, then it gets confusing. Attributes such as (uncredited) apply to the actor as a whole, not to individual characters, so it's not possible to specify that only one of the two characters was credited.I vaguely remember one case I came across some years ago where if per-character attributes were possible an actor should have been listed as "Character A (credit only) / Character B (voice) / Character C (uncredited)". I had to abandon all attempts at getting that reflected accurately and I think I probably just ended up submitting it with "A / B / C" and no attributes at all.I'll be very interested to see if staff (or a more experienced contributor than me) has a good solution for this sort of situation.

If I'm not mistaken, the opening credits for Star Trek: Deep Space Nine list the series regulars and their roles. If anyone played two or more characters in a specific episode, it would not be included in the opening or closing credits. However, the information should be noted in the IMDb that the performer played another role in a specific episode. It all depends on the series and how the credits are or are not displayed.In my opinion, adding statements in an episode's trivia section about a performer playing multiple roles and that same information is already mentioned in the cast list is redundant and should be removed.

you're correct about how it's credits are shown (in the opening sequence) which is why I'm confident they were not listed with both "roles". In this particular case it's really wacky because they were themselves with their voice and simply delivered dialog as if they were another person. I use the term deliver in the context of giving lines as if they had lived another life. If you're not familiar with DS9 and Dax being a trill it's difficult to explain.

There are shows where it's the same actor but they play an essentially duplicate person to themselves that is some how weaved into the story line.

Contrast it with The Prestige for example where the same actor played two roles with heavy make-up. And if I'm not mistaken the credits I think listed both characters with the name.

And I've done alot of cleaning on DS9 for duplicative info just like this. In this particular case what caught my eye is that only one actor has the trivia item when multiple actors did a "dual"role, so I have to wonder who loved Quark so much to make him special.

Michelle, how should this be entered?Including (uncredited) as part of the character name throws up warnings in the update form (and I'm sure would be rejected by data editors if ignored and submitted anyway)... but as I noted above, including it as an attribute would mean it applies to the actor as a whole, not to individual characters.

Just to illustrate what Phil G says, I copy/pasted this into the character field:John Smith/Post-man/Grocery Clerk (uncredited)/Jimmy Dune (uncredited)

and got this, even after checking the "understood" boxes:

That's certainly accepted by the contribution form.
I don't have such an update, so I'm eager to get confirmation that it works when the characters are displayed.
Is that documented in the guidelines?

If a cast member is listed more than once in the credits for playing multiple roles, list them once in the position of their first appearance (see cast orders), and separate the other roles in the character field with slashes, i.e., Role1/Role2/Role3 (This refers to the cast member's first appearance in the cast list rather than the appearance order of the multiple characters). Please do not put spaces either side of the slashes. If you notice that one of their multiple roles is missing or needs correcting, please submit your amendment with all the roles again, as above, separated by slashes. Do not submit the missing or corrected role on its own. If the same individual is credited twice under different names in the credits roll as well as playing separate characters you would need to add multiple (as) credits for each credited name in the attribute field in the order they appear e.g. (as Tim Smith) (as Timothy Smith).

PS BTW: What if the first appearance was uncredited? ;)))

I'd be interested in seeing examples of this being used in practice and how it actually displays. Also, how would this method work when there are different attributes involved such as my example earlier in this thread?

MAthePA, I think that would imply that all the attributes apply to all the characters, which is not what we want.

The above examples of mine are based on the official explanations. But now I also think, it may be not well explained because we can have a character with multiple attributes... So, it might be correct to explain this way:Character: A/B/C Attribute: (credit only)/(voice)/(uncredited)PS: I have no practical example at hand to try right now, sorry.PPS: I tried to simulate the (credit only)/(voice)/(uncredited) combination, but it does not work. So the system is not perfect for such cases.

I found a case to try practical this variant:Character: A/B/C Attribute: (credit only/voice/uncredited)It also produces the result we don't need:A / B / C (credit only/voice/uncredited)Moreover, any use of attributes in the characters field this way:Character: A (credit only)/B (voice)/C (uncredited)Attribute: [empty]even if such would be allowed by system, is not possible for objective reasons. See for example the below mentioned Cloud Atlas (2012). Jim Sturgess plays different characters there, among them:Adam Ewing / ... / Adam (Zachry's Brother-in-Law)As we see, there is an objective reason to use the additional explanation (Zachry's Brother-in-Law) in credits, because there are two characters named 'Adam' both played by the same actor. So even if system allows, we could not use attributes in the characters field here :)))

Hi, MikeTheWhistle.Please see:Cloud Atlas (2012)Manifesto (2015)these examples are self-explanatory.The second one is where no different credits printed, hence 12 different roles are credited as "Various".

That is an issue which actually pops up rather often but rarely gets adressed simply because it gets shrugged off. At least in my case. Great to see it being adressed and problem actually getting a lot of attention.

In this short film I portray three roles, two of which were credited, while third one was uncredited, so I put it as the last one.

If system will allow listing "(uncredited)" in actual role description, that would mean a lot of additional corrections on many titles I'm more than willing to do. Same goes for "(archive footage)" since "(also archive footage)" is an option no longer available so there's simply no way Bob Hope can be listed adequately for his dual appearance as Bob (in archive footage) and then his final film role filmed exclusively for the same movie (trying to avoid the title in order not to have spoilers, even though title is from 1994) and seen as a surprise cameo during the end credits. Especially since both are uncredited.

Apologies for the confusion. Just to clarify, it isn't possible to split multiple credits for the same cast member on the same title with different attributes - we wouldn't accept any attributes in the role description.

In the case where someone is credited for some roles and not credited for others, Nikolay is correct, please list the roles in the order they appear in the end credits, split by /s and followed by any uncredited roles, with an order number relating to the first on screen credit. This should also be listed without an (uncredited) attribute, as most of the roles are credited.

On these occasions then it is also ok to add a trivia item explaining the situation.