Third Time Adding Soundtrack Submission Worked Like a Charm, But I NEVER Should Have Had to Try Three Times!

Last weekend, after watching another episode of Tatort on MHz Choice, I noticed that the three Janis Joplin songs heard in the show were not in the Soundtrack listing.  So I put the name of each song in a separate entry with the song title, by Janis Joplin.  The system declined the entries even before hitting the Submit button because I didn't have quotation marks around the song titles.  Added the quotation marks, system happy and submitted the new entries.  A few days later they were all declined.  Looked at the guidelines and I didn't have the work performed before Janis Joplin.  The system should have told me that to begin with the first time.  I added performed just before the word by on all three entries, system happy and submitted it.  A few days later, same thing.  Declined because not in proper format.  Searched through the submission guide and this time see that they want a link.  Next day I try again, and couldn't figure out the link part, then saw that they want song title, written by, and performed by, on separate lines.  Again, the system should have told me that at the very beginning!  Re-submitted with separate lines and automatically accepted.  Again IMDB, get your act together.  Instead of constantly having the submission declined, the system should have told me BEFORE letting me hit the submit button that the title was in quotation marks (which it did), that it said performed by (which it did NOT), and that all three or four lines if you know the songwriter's name as well are separate (which it did NOT) before allowing you to hit the submit button!  It should only have taken one try, not three, to get it into the format that you want!

I'm just following up here to confirm that we have now implemented some Soundtrack Tips within the Contribution form: 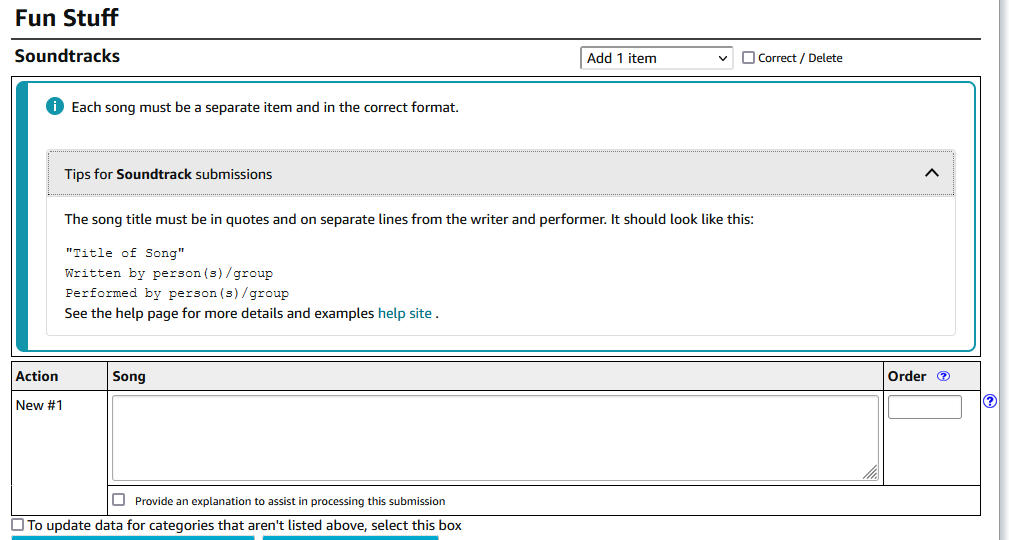 @Peter_pbn​ It should ask for all of that information in the format it wants before even accepting it to let you hit the submit button.  Poor programing by people who just don't seem to care about the user experience.  They want us to look at everything so they can throw numerous ads our way but don't give a damn about how frustrating they make the experience of adding information.  Keep it up and eyeballs go away and won't see the ads anymore.

So basically you didn’t really read the Soundtrack guide and keep blaming the ”lack of warnings” or ”jerks”. Mostly everything is in the guide.

Don’t wait the system to tell you ”why” something is badly formatted or is lacking something. Since that simply isn’t going to work in IMDb. Read the guide and follow that. That is your bible.

@eboy​ The main point is it should tell you that the information is not properly formatted BEFORE you are even able to hit the Submit button.  It would save a lot of time and frustration.

Thanks for the feedback, I have passed along these comments to the appropriate team for visibility on Warning improvements within the contribution form, specifically regarding Soundtrack data submissions.