IMDb has the film "Once Upon A Savage Night" AND the film "Nightmare In Chicago" on the system.....they are two versions of the same film.  One has had scenes cut, the other doesn't.  They are booth listed on the system.  When I pointed out that they are alternate version, IMDb says they can't verify.   Really?  It took me less than a minute to find both and another minute to check and compare them.  IMDb - THEY ARE ON YOUR SYSTEM!!!!

Did you recently request a Title Merge that was declined?  If so, please post the 18-digit submission reference number here and I can take a look for you.

@Michelle Nah, I'm not going for merging anything....I just was trying to show that there was an Alternate Title AND an Alternate Version of the same work.   It is on IMDb as both 'Once Upon a Savage Night' Kraft Suspense Theatre Season 1 Episode 21 AND as a TV Movie listed as "Nightmare In Chicago" with a longer running time and added scenes.   I like the film and just had a hard time locating it on the internet so I figured I would tell other old farts like me to look under the other title if they couldn't find it on the first.  That's it....just a Alternate Version/Trivia Item.

@rgl_3cxradz9t4tud I think best would be to add a "Edited from" connection to Nightmare In Chicago.

I mean: "Nightmare In Chicago edited from Once Upon A Savage Night"

Btw, currently both title pages have same release dates but expanded movie version (Nightmare In Chicago) should have a 1969 release date because 1964 is for the tv episode version. It gets expanded to a movie in 1969. 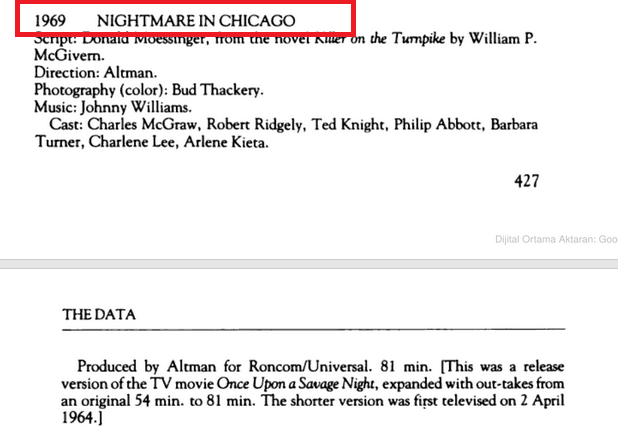 [Expanded for theatrical release in 1969 from the 1964 TV movie ONCE UPON A SAVAGE NIGHT].

Thanks Buddy!!!  I love those old Telefilms from the 60's and it took me forever to find that one under its other name!  I figured if any other old geezers are looking for it it might help to know both names.   I'll see what I can do.  Thanks Again!

@Michelle Thanks for the assist.  I think I will try forthehorde's suggestion and see how that works.   Appreciate all the timely responses!

Uh...ok, I'm stupid..... How do I mark forthehorde as accepted answer and let people know not to worry about responding anymore?  I don't want to tie up the system with people trying to give an assist.  (I don't use this forum that much so I 'm a relative newbie) I marked your response but I don't know if forthehorde gets points for an assist.

@rgl_3cxradz9t4tud It's OK, I don't need "points" :) just interested in the topic and wanted to reply with an idea.

Thanks again, Bud!!!   I'll have to learn the parts of the system better.   Trivia & Goofs I'm good at. Got a handful of reviews but I some of the intricacies leave me lost.   Have a Great one!  :)

Yeah, and I think we all wind up learning certain forum mechanics the hard way.

Also known as "Once Upon a Savage Night" Kraft Suspense Theatre
season 1 episode 21.

Also Known As (AKA)
(original title) Nightmare in Chicago
- - -

@ACT_1 I have never HEARD of the 2012 film.   I am talking about the 1964 Kraft Suspense Theatre episode "Once Upon A Savage Night" which is a shortened version of the 1964 "Nightmare in Chicago" film.  BOTH are on IMDb.

Thanks for the info!  Sorry it took so long to reply!  I wish the producers would stop using the same names for completely different movies.  It's like somebody calling a new racehorse Man-O-War or Secretariat!  :)