They/Them is currently being review bombed and pummeled with 1 votes. It hasn't even been out for a full 24 hours and already has 400+ 1 votes (72% of total votes) and that number is rapidly rising. Overall rating is already down to a 2.2 thanks to the bigots. The movie is being advertised all over IMDB and that's why there is so much attention on this particular title at the moment. I'm sure by the end of the weekend there will be over 1,000 1 votes here. Note that this was happening before the film was even publicly released at 3 AM this morning. Voting was open prior to that because the film had premiered at a film festival. Here's a screenshot I took last night proving there was already hundreds of 1 votes prior to release. Sadly, this isn't a one time occurrence here on IMDB. It has been happening for years and is only getting worse and happening more and more frequently. Anything's Possible, Tom Swift, Queer as Folk, Lightyear, The Book of Queer, and Generation Drag are all examples of LGBTQ+ films/documentaries from ONLY the past few months that have been impacted. All have a very high percentages of 1 votes (at least 20% in these cases all the way up to a whopping 50% for Tom Swift) that is indicative of very obvious rating manipulation. Of course IMDB's worthless weighting system does absolutely nothing for any of these titles. IMDB's weighting system does nothing to help titles that are actually review bombed...they either show a rating EVEN LOWER than the mathematical average or bump the rating a measly .1 or .2 which is nothing. This is beyond unfair and ridiculous at this point, something needs to be done. IMDB is becoming overrun with bigots and nothing is being done to stop it.

On the flip side, let's look at transphobic "documentary" What Is a Woman? by Matt Walsh. That one is being pummeled too, but with 10 votes of course. Currently sitting at a 8.6 overall rating with 65% of the overall ratings being 10s. Yet NONE of those 10 votes are being filtered out by the weighting system. I'm supposed to believe all of those 10s are legitimate? Supposedly. Compare that to Transhood, a pro-trans documentary and another victim of a mass review bombing sitting with an extremely low score because the 50% share of 1 votes there that are allowed to stand. Then there's First Kill, a lesbian vampire show with a strong fan following. It has an extremely large number of 10 votes...except those 10 votes are being filtered out en masse. An 8.8 mathematical rating there but only a 6.3 weighted average. Why are so many of First Kill's ratings filtered out but none of What Is a Woman's are? Clearly, the weighting system is useless and needs a total overhaul. The people review bombing titles aren't robots but that doesn't mean their ratings are legitimate. Basically, the only way these films can overcome these hundreds or thousands of bigoted votes is if they reach a wide enough audience to combat the large number of low scores. But some projects are simply niche by nature and can never overcome the amount of review bombing placed upon them.

It's not just LGBTQ+ titles either. Basically anything starring a female or minority at this point, whatever these bigots deem as "woke" (AKA anything that dares to appeal to a group of people outside of the one they belong to), is fair game to be review bombed. Resident Evil and Mrs. Marvel are yet more examples of recent review bombings because these shows dared to have diverse female leads. Ghostbusters (2016) is notorious for being one of the first examples of this after all. Charlie's Angels (2019) and many other female-led action films suffered the same following. In the instance of Ghostbusters, IMDB actually implemented a different weighting system to combat the review bombing. Bravo! However, it's done absolutely NOTHING for the hundreds if not thousands of titles that were unfairly review bombed after that. When is something going to change? Because there are plenty more titles that deserve the separate weighting system, but again in reality the weighting system as a whole needs a revamp.

How well is THEY/THEM rated on other sites?

People leave 1 star ratings for the same reason they leave 10 star ratings. They sort of want to bend reality to their will and whims. People are leaving 1 star either because they want companies to think that everyone thinks like them and to stop making movies and shows for other audiences besides them, or because they actually want to believe that they are in the mainstream but that companies are making these titles because they're misguided and that the "mainstream" isn't making their voice heard, so they see themselves as spokespeople for these unheard masses.

I am guilty of this with 10 star reviews. Whenever I find something strange, offbeat, but thoroughly enjoyable, I will give it a 10 star review...even if I don't think it's perfect because I want the title to find an audience. I might be the audience...who knows, but I believe there are others like me out there so I rate it highly so it will get seen by more.  There is some wishful thinking in it. A desire to see your opinions and values reflected by society.

I just left a 10 star review on They/Them for example. Even though I haven't seen it, because it's being review bombed and also because I want to see mainstream companies make more LGBTQ+ titles as I'm a member of that community. But I don't have Peacock and really can't afford another streaming service. I think we're all a little power hungry out there and we all wish that the world wasn't so bigoted/"woke" (depending on your politics)  as it actually is.

@BdoMcGregor​ You make a lot of great points. I agree and have thought the same regarding the intentions of these bigots. They think by review bombing and attempting to ruin a particular film/show in any way they can that they'll force these companies into stopping production of this type of content. It's the only "power" they have. Because again, they're the only ones allowed to have content made for them. They view diversity as a personal attack. Whatever happened to ignoring something you aren't interested in? You'd think they were being forced to watch the endless list of shows and movies they review bomb. I suppose when you have no life though you have nothing better to do than be hateful. Sad!

Everyone of course has their "side", perspective, and view of the world but I definitely don't see liberal people engaging in these endless review bombings the way the conservative "anti-woke" folks do. Surely a joke of a documentary like What is a Woman wouldn't have an 8.6 on IMDB if liberals review bombed with the same aggressiveness conservatives do, that's why I listed it. I've never seen any film with such a percentage of 10 votes not be impacted by IMDB's weighting system as I mentioned. Again, why are NONE of those votes being filtered out? Very fishy! Clearly, IMDB refuses to answer or even look into it. I've seen other people complain about vote manipulation and IMDB employees replied saying they forwarded the information on to be looked into. Funny no response to or acknowledgment of my post though, total crickets. The silence is deafening. I guess they think if they ignore the issue we'll stop talking about it.

How about banning people who have had their text reviews removed repeatedly for bigotry from being able to rate/review titles? Because the text reviews these days too are FILLED with bigotry too since IMDB is allowing that garbage to fly here. They're spewing it all out in the open. Have they just decided to pander to the bigots now? Is that their target audience? And even when a review is removed, they can just repost it. Restricting use of the site to people who openly espouse bigotry is a no brainer, how is that already not a thing?!? It wouldn't completely solve the problem since you can rate a title without reviewing of course but it would be something, a step. There are lots of things they could try to do. Instead they do nothing. Quite shameful.

Seems like A League of Their Own is the latest target, there's a new example every week now. Reviews already filled with pathetic bigots whining about woke this and woke that. And I could have listed 100s more examples since as I said this has been happening for years now and as a long time user I've been here to witness it all. Sad that because of issues like this, amongst many others, IMDB is willingly choosing to lose credibility in such a major way. I can see why so many have fled to other sites such as Letterboxd. Letterboxd isn't perfect but one thing they do EXCELLENT job at is not allowing bigotry to thrive on their platform. IMDB should be taking notes!

I totally agree with you. I regularly look through reviews of shows with minority & female leads, and report the racist/hater reviews that obviously never even bothered to watch the show/movie. Yes, “Woke” is a common term they throw in. Report the obvious BS reviews to IMDB and keep looking for & reporting them. If we all do this, it will get their attention.

She-Hulk is being battered despite not officially streaming on Disney+ until tomorrow.

There's another thread about review bombing that's a consolidation of two threads on the topic. IMDb officially recognizes the problem there (admin wise). Not sure how much they're actively doing about it. 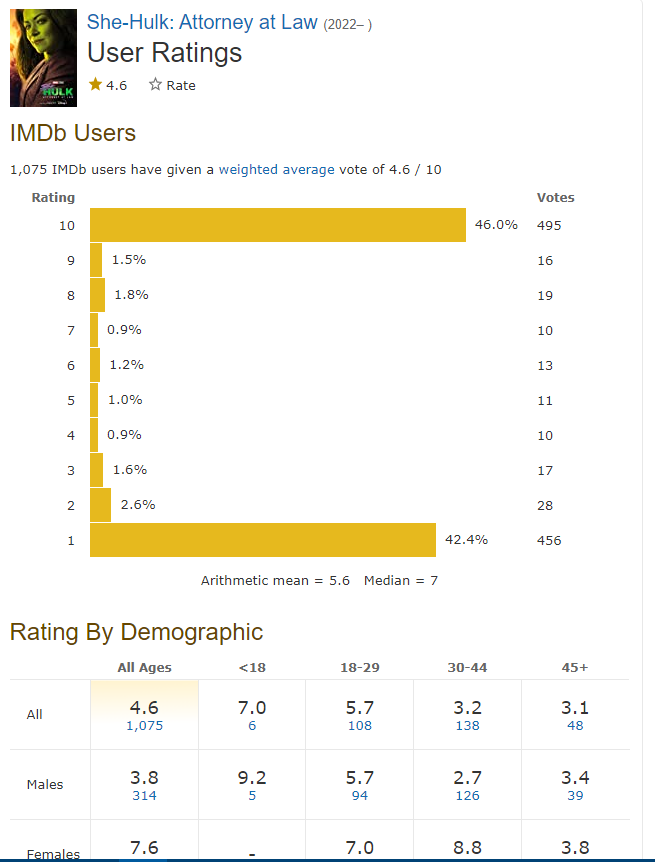 @Tsarstepan​ Have they? I'll have to find that thread because I haven't seen it. They've completely ignored this thread without even as much as a single acknowledgement. In other cases, I've seen them say they'll pass the message along to be looked into (whether any of these "investigations" actually lead to anything who knows, probably not) but nothing here. Maybe I'll have to email them directly for visibility of my message at the very least. I'm happy to see lots of fellow members of the IMDB community agreeing and calling this out with me. The more we bring attention to it, the more likely they'll be forced to do something. LOTS of people are noticing this and are sick and tired of it. IMDB is allowing bigots to completely destroy what once was a great site. @Col_Needham do you have any comment on this?

I'm glad you are pointing out the She-Hulk review bombing, another one to add to the list. I wasn't exaggerating when I said there's a new example every week now. This probably is out of control and impossible to continue ignoring. It's getting worse, not better. Although presumably will do nothing about this example too, just like they've done nothing about They/Them's review bombing despite the fact that we've proven that they were being review bombed prior to public release. How long can nothing continue to be done? Change your weighting system. Ban/restrict users suspecting of review bombing and/or have had their text reviews removed for being bigoted in the past, don't let their votes count towards the totals. Crack down on users with multiple accounts. So many common sense places to start. Do something, anything! And why are 1 votes seeming given more power in this horrific weighting system than 10s considering how big of a problem review bombing is on here? Such a mess. If these bigots see their attempts don't work and/or have the OPPOSITE effect on a score, many of them wouldn't even bother. But IMDB allows their targeted hate campaigns to be successful which only further fuels the problem.