Somebody merged their page to mine, and now it can't get removed

Somebody merged their page to mine, and somehow it got approved by IMDb that they were in fact me, adding more than 150 false credits and pieces of information. But I spent hours last night, trying to delete each credit each with an explanation of what happened, and each got declined because I can't prove this person isn't me. Like, ?????????? How on earth did this other person prove they WERE me????????? How do I prove I'm not them?????? Also, been trying to fix the date on one of my films for months, it says it was released in 2019 but it's still in post! How do I prove that, too????? Send a screen shot of my editing timeline??? My birth certificate?????

First off you can't delete those credits because they are legitimate credits the just belong to the poor guy who had his page merged away and if you delete them, when the pages get re-separated he'll have his credits missing through no fault of his own.

The right thing to do, what you are partially doing here, is to let IMDb know about the issue and give as much detail as you can to which credits are not yours via a list of names that aren't you, look at the bottom of the page in the Alternate Names list and list what aren't yours. Then IMDb can look into the issue and hopefully re-separate the pages. But be patient as this can take awhile to do.

An IMDb staffer will likely be along shortly so if you get the extra info up asap, that'll help them and get things moving quicker. Also details about the movie date issue and any contribution numbers from that should be posted also.

I'm guessing this is the profile you're talking about Shane Ryan - IMDb as it contains 100's of credits under different names, but mainly under the name Shane Ryan, and has significantly more credits than it had in September 2021?

The answer is most likely...

A credit or some credits for the same productions were on two separate profiles with the same name, after someone had added it or them to wrong profile, so they merged the profiles together.

However what I want to know from you and everyone else on here that tries to do the same thing....

Why are you trying to delete valid credits?

Obviously they're going to be declined without proof.

If they're not yours then they need moving to the correct profile.

If one doesn't exist, or you don't know which one it is, then move them to an empty profile, or create a new one.

They could all be moved to this profile Shane Ryan - IMDb, as it's 1 of 3 profiles with the name Shane Ryan which are empty, however you'll no doubt have to name them all, and get an admin to move them due to the numbers, but also because simply moving a single credit to a different profile is problematic, as they get declined a lot.

I merge 100's of profiles every week, however I don't merge profiles with that amount of credits unless I'm certain.

The large majority of the profiles I merge are mainly for duplicate profiles with a single credit, which has already been added to the correct profile.

There's one guy I've just stumbled across right now, while looking through a few of the 144 profiles with the same name, who has at least 3 duplicate profiles.

Who is this person?

A man who works at ITV as a publicist, and no doubt has other roles too.

How can I be certain they're all his?

I can be certain because they're all ITV dramas, they all have the same job roles, plus some of his credits from 2003 to 2011 are listed on the BFI.

I'd love to know who is responsible for adding and updating credits on the BFI, as they're always incomplete, just like most feature films are on here.

I've only looked through around 20 of the 144 IMDB profiles so far, so there will most likely be many more of his credits for ITV dramas scattered around on some of the other 120+ profiles.

Yes I've used a few names over the decades but my page was totally accurate 3 days ago (aside from missing some credits that IMDb refuses to approve). But then 2 days ago somebody with the names  Shane Schoepner | Shane Schoeppner | Shane Schoppner suddenly appeared on my page (with a whopping 150 or so credits, including 'other works' and trivia/quotes/etc), also including his bio which states in the bio that he was born in a decade different than that on my profile (the conflict right there should have never allowed it approval I'd think). Which has me wondering, how on earth did somebody ever prove that this guy was me? And now IMDb won't remove it because I can't prove I'm not him. Like, seriously?

This is such an unbelievable headache I've already wasted so much time on. I wasn't trying to delete valid credits I was trying to get invalid credits removed from my name. I've reached out to them multiple times asking them to please just merge the guy off of my page and back on to his own, I don't get how this even happened to begin with. We don't share the same name (aside from just a simple first name), don't share a birthday, we each had our own pages with tons of credits over the years...how do two completely separate people suddenly get merged together?? And they keep saying I can't prove I'm not him? Meanwhile they won't approve a credit for a movie I produced which actually is accurate, nor put one of my films in post-production phase as it says it was released in 2019 when it's in my editing timeline. Again, asking that I prove it wasn't released (how do you even prove that? it's easy to prove something WAS released, but not that it WASN'T). Like it'd be easier to prove that somebody is ALSO somebody else, but how do I prove I'm NOT this guy?

I did see that there is a blank page with his name Shane Schoppner - IMDb so maybe I'll try seeing when I have time again, if I can figure out how to move one credit there and start with that.

Ugh, anyway, thanks for the response, this is all too overwhelming to deal with this week.

Are there any more incorrect credits under a different name, other than Shane Schoepner, Shane Schoeppner, and Shane Schoppner?

The Shane Schoeppner, Shane Schoepner and Shane Schoppner are all on the same Shane Schoeppnner profile which can still be seen on Google, where it only seems to have 102 credits https://www.imdb.com/name/nm3762485 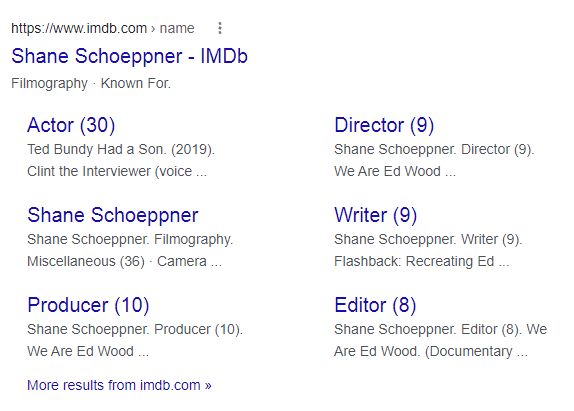 I've seen them being talked about here on Sprinklr at least twice recently.

Here's one of those conversations where the same profiles merged incorrectly situation had happened with someone else OFFICIAL IMDb REP ASSISTANCE REQUESTED | IMDb Community Forums (sprinklr.com)

I didn't realise until after I had commented (as I only attempted to find the films, and didn't click on the IMDB profile for the person), that the person they were talking about (Ethan Levy), has also been mentioned on here multiple times over the last year, as he has or had multiple credits for a completely different person (Elan Levin) on his profile.

The incorrect name has now been moved to a different profile named Elan Levin now, which surprisingly only contains 1 credit, yet I'm sure remember seeing multiple credits under that name months ago, therefore I suspect they've been deleted from IMDB incorrectly.

I can't remember where I saw the second post containing a mention of Ted Bundy Had a Son, as I didn't comment on it, however I remember one of the top commenters on Sprinklr saying that Ted Bundy Had a Son is made up of multiple short films by different people.

@daniel_francis_gardecki Good detective work there. That explains the Ethan Levy/Elan Levin situation I fixed. Obviously someone is doing some vandalism here with errant page merges. No IMDb response yet but I hope they send it to the team for further investigation.

I once found someone that made their own IMDb page then merged 7 other peoples pages to it to steal their credits, 2 of those pages belonged to actors who were Babies in a recent show, their social media was awash with fake mocked up casting notices of themselves being cast in major shows, which did not show up anywhere in reality. If IMDb could fix that, they should be able to fix this, it's not going to happen overnight I'll say to put his mind at ease if it's not immediate.

IMDb needs to tighten up approving on name merges of people with completely different names to stop this happening.

@VonPunk This unmerge can be fixed overnight by an admin.

I've spent most of the last week or two mainly doing nothing but merges, mainly for names where there's 150 to 200+ profiles for each.

A few from yesterday include:

Roughly 10 separate profiles for an animal wrangler in Utah.

Roughly 10 separate profiles for an astronaut.

And many more single duplicate profiles.

@daniel_francis_gardecki Yeah it should be simple it's just 'when' they get to it. Still waiting on stuff to be fixed I reported in January. But this issue looks to be sorted now. and pages unmerged. Good to see. Have a good one, all.