This impersonator is hijacking obscure Asian cartoons and shorts and adding fake posters, credits, info, companies, etc. and pretending they're crossover events with characters that almost no one outside of Korea has heard of. Please find these pages, correct them, and ban this user from hijacking this site again. I'm begging you. These fake pages are hijacking a lot of people's imdb filmography pages and I'm sure they would be pissed off if they found out. Examples of the hijacked pages i'm talking about include pages of Doraemon, Shimajirou, and Pororo installments that either don't exist, or have completely fake info on them.

By the way, I'm going to track down the 7 Shimajiro films and get them on DVD at cdjapan.co.jp The only problem is they are Region 2 and I won't be able to understand them, so I'll have to watch them on a region free DVD player.I wish there was a Region 1 version of Shimajiro with English subtitles and English credits. But for now I'll try to find and watch Shimajiro and the Rainbow Oasis on DVD since I can't find it anywhere online or the online videos. I'm sad the 6 Shimajiro films have been taken down off of Amazon Prime in Japan website, I don't know when they'll be up again.I'll let you know and update you, if I see the Shimajiro films so that I can help out with fixing the Shimajiro imdb credit pages. 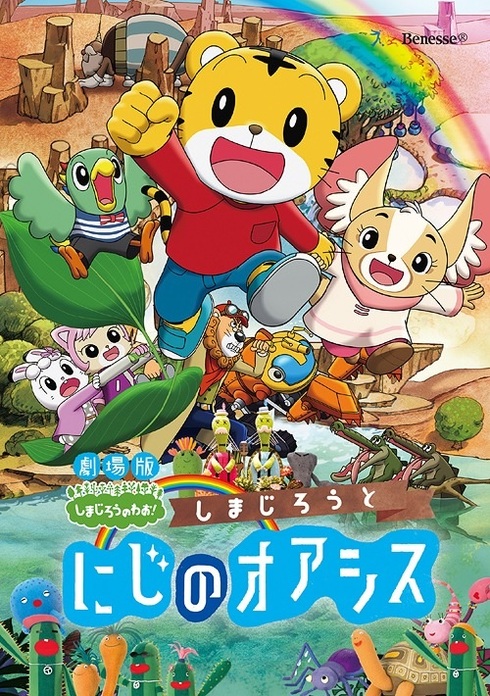 To the imdb staff I've just received an email by the Benesse Company staff, they're going to investigate the Shimajiro film imdb pages I've listed on this forum so I'm waiting for their response.So far the imdb pages of Shimajirô to fufu no daibôken - sukue nanairo no hana (2013) and Gekijouban Shimajirou no wao!: Shimajirou to ookina ki (2015) have started to get incorrect credits deleted.However, there's still 5 other Shimajiro film pages with incorrect actors includingGekijouban Shimajirou no wao!: Shimajirou to kujira no uta (2014)The Shimajiro Movie: Shimajiro in Bookland (2016)Gekijouban Shimajirou no wao!: Shimajirou to niji no oashisu (2017)Shimajiro and the Rainbow Oasis (2017)Shimajiro and the Rainbow Oasis (2018)I've submitted credit deletion requests earlier to remove the wrong credits but it has been declined. Please reply to the forum. By the way, I still haven't been able to watch Shimajiro and the Rainbow Oasis yet as I need to get the Region 2 DVD movie as soon as my family will let me buy one.Please let me know if the Benesse representatives has responded in the imdb forum page. 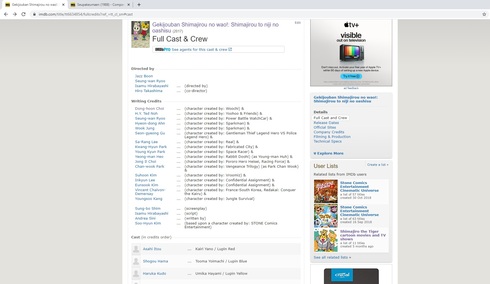 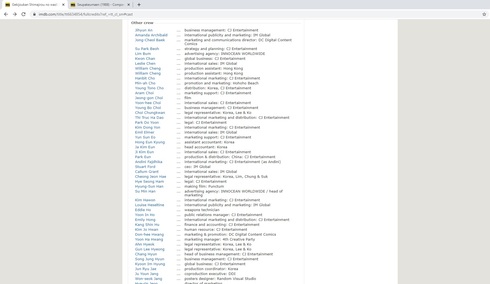 Now notice in the writing credits how in the writing credits there's names which do not relate to Shimajiro and the Rainbow Oasis including (character created by: Woochi), (character created by: Yoohoo & Friends) and such. Also notice in the other crew how there's CJ Entertainment and DC Digital Content Comics written next to the job names. I've watched the end credits to this film and CJ Entertainment was not involved nor was DC Digital Content Comics which is obviously Warner Bros property which owns DC comics. And also Pixar Animation Studios was never involved with Shimajiro.There are some correct credit names in this film such as Isamu Hirabayashi ... (directed by)Hiro Takashima ... (co-director) as they were officially involved in the film. Now here's the example list of what correct actor credit names should be in this screenshot. 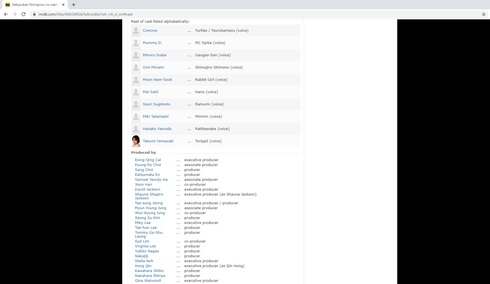 The correct Japanese credit actors involved in this film are Cowcow, Mummy D., Minoru Inaba, Omi Minami, Mei Satô, Saori Sugimoto, Miki Takahashi, Hanako Yamada and Takumi Yamazaki. The only credit incorrect is Moon Nam-Sook. And they have been showing up in Shimajiro and the Rainbow Oasis credit pages including at this Toho Animations website link https://www.toho.co.jp/movie/ods/shimajiro2017.html and I saw Cowcow and Mummy D. name show up in the Japanese credits. There's about 10 actors not over 100 actors in the Shimajiro page.There's no English dub of this film sadly, so the English actors like Flavor Flav did not play in this film at all. I couldn't read the Japanese symbols in the end credits so I'll need an English translator to translate the credits when I get the end credit video uploaded. 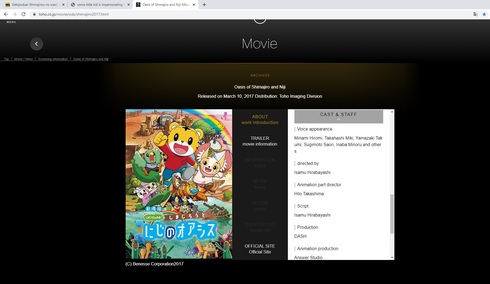 Please imdb staff reconsider investigating the pages Gekijouban Shimajirou no wao!: Shimajirou to niji no oashisu (2017), Shimajiro and the Rainbow Oasis (2017), Shimajiro and the Rainbow Oasis (2018) please get the incorrect credits cleaned out I need the Benesse representative worker from the company here on the forum page. The Shimajiro film credit pages to be cleaned out as that's my favorite Anime film and I'm very protective of it. Let me know if I can pull up my deletion number submission requests. Thank you for your time.

I have found out the preparator behind the imdb credit vandalism. His deviantart username is huyvo2001 he appears to be from South Korea or China or Japan.

I discovered the posters he created and removed them. He confessed to me that he was the one mislabeling credit names. And the imdb user name accounts he owns are mtvsumy, xuanduy-39299, finarectoria and mygiahuy

I'm very sorry for this mess. I'm still in the process of trying to help the imdb staff clean up the Shimajiro and Doraemon credits.

I am very disappointed in huyvo2001 in spamming the imdb pages with fake images and fake credits, he has caused me confusion and stress and to one of the imdb staff members I'm very sorry that this was allowed to happen.

Can we consider either blocking his imdb accounts or remove the adding credits feature from his accounts. I don't want him to spam my favorite Kids Anime imdb pages ever again.

To the IMDB staff, after a few years of researching the credits for the Shimajiro films. I went to Yahoo Japan and looked up Shimajiro credits and here are the official credits I've discovered on their PDF file in full English.

Please review the Shimajiro credits and let me know if it's proof enough to remove the fake credits on the Shimajiro IMDB pages. I need one the Benesse staff members to talk to you if possible.

Please let's clean out the fake credits from Shimajiro and restore it back to normal.

I also want to restore the Doraemon credits back to normal as well.