When a Plot Summary is added that is too long we don't get any warning but it seems to be just ignored & isn't added.

What is the maximum size that a Plot Summary can be?

Can we get a warning if it's exceeded?

If you have had Plot Summaries recently rejected where you are concerned about the length, can you post the 18-digit submission reference numbers?  Once we have that additional context our staff can take a look.

It would help greatly if you could tell us what the maximum size of a Plot Summary can be & if we were given a warning when it was exceeded when the submission is checked for things like spelling.

Generally, our preference is that Plot Summaries are a brief paragraph or two, between 239 and 299 words.  For a visual on length preference, the below shows the differences between Plot Outlines, Plot Summary, and Plot Synopsis: 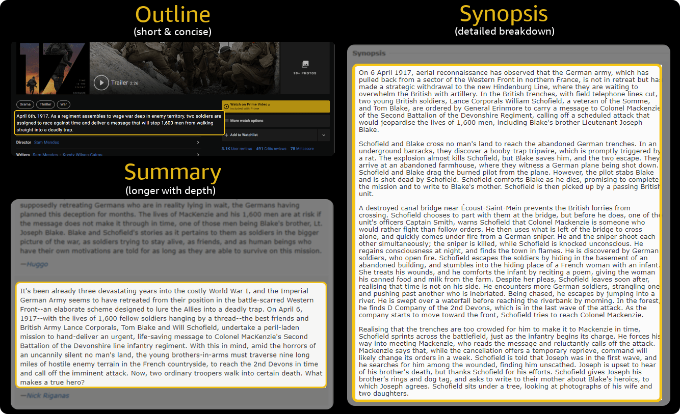 I encourage you to provide brief summaries going forward that fit within the word count range.  If you want to provide a more lengthy context, you may want to consider submitting a Plot Synopsis instead.
I hope this helps!

Thanks very much @Michelle,

I've re-done episode 8.10 & I've done a few others making sure that the summaries are well under 300 words