After investigation, we have decided to reinstate the credit as we believe it is factual information.

In order for our staff to investigate, can you post the link to your IMDb page?

The film in question is pretty obviously, "The Heaping Bouncing Breasts that Smothered a Midget"  I am credited with "acting" and additional crew - "door slammer".  I mean come on - even the crew position is a non-existent job.

I have now removed the credits.

Are you sure, Spencer Snygg, that you haven't worked with your brother on any of these titles?

You are also listed in the cast for The Heaping Bouncy Breasts That Smothered a Midget on Letterboxd. 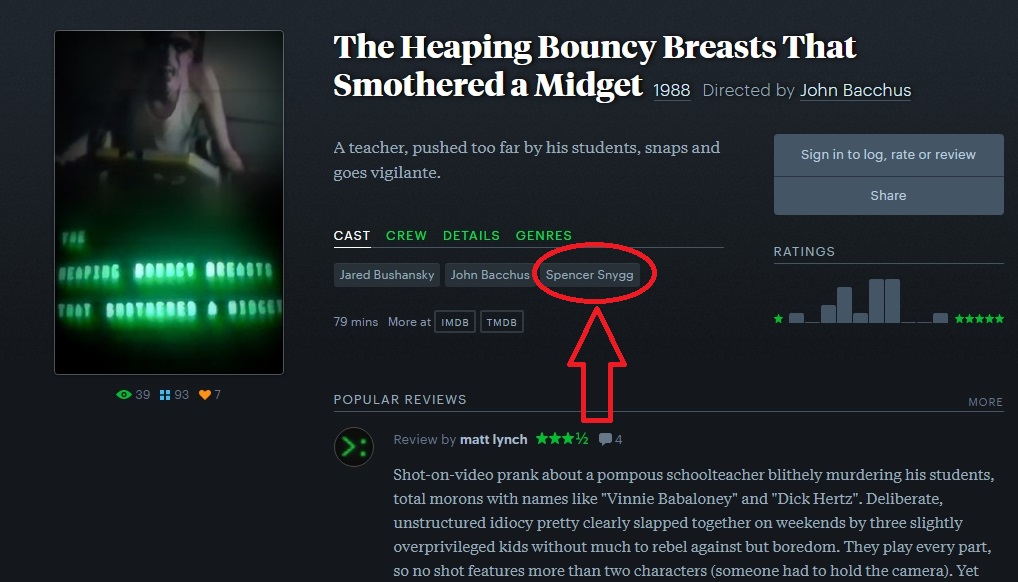 In fact, you have been listed in the cast for this title on Letterboxd for nearly eight years, at least.

Are you suggesting that your student got upset at you and credited you on this film eight years ago, and that you haven't been able to get a teaching job ever since?

@Bethanny It appears that Spencer Snygg has not been honest with you. I recommend reinstating his credit on the title, in order to ensure accuracy.

Then there is this listing for The Snygg Brothers on IMDb:

I assume the Snygg Brothers means both brothers?

Is that even allowed on IMDb -- listing two brothers together under the same vague name entry on IMDb, without any other identifying information?

As further evidence that Spencer Snygg is in fact an actor in The Heaping Bouncy Breasts That Smothered a Midget, I refer you to the reviews on Letterboxd:

Deliberate, unstructured idiocy pretty clearly slapped together on weekends by three slightly overprivileged kids without much to rebel against but boredom. They play every part, so no shot features more than two characters (someone had to hold the camera).

Three teenagers fucking around with a video camera and clearly just trying to make each other laugh. You eventually get swept up in their nonsense and all their dumbass absurdism gets really funny.

There’s rarely more than two people on screen (and you can catch the camera in the mirror early on), so it helps that the plot— a dweeb “mid-Eastern history” high school teacher gets so annoyed that he buys some guns and starts killing the kids - is a very simple clothesline for all the jokes, all of which are fucking stupid and delivered with full confidence.

Clearly just a couple of teenagers in New Jersey cracking themselves up with a cheap consumer video camera. Shit like this was being made every day back then, and most people didn't have the chutzpah to charge strangers $25 to see their horsing around.

The three teenagers in question were Spencer Snygg, his brother Zachary Snigg (aka John Bacchus), and Jared Bushansky.

But regardless of how he feels about it, Spencer's credits on this title should be reinstated. IMDb has always promoted accuracy above all else.

As I said before, Zack and I have made action comedies and horror films together.

I honestly never heard of "Letterbox" but if the hiring staff have, that could explain why it HAS been really hard to get teaching work lately.  I apprenticed with the DP of Bladerunner, learned from David Fincher, IMDB lists maybe 1/8th of my credits.  I'm a really good teacher.  At one school I taught at, the number of students going there went from 72 to 156 in just a couple years.  When I left, it went back to 70 a couple years later.   My students get jobs in the business and are highly praised.  And yet, I don't get hired and people with no experience get hired instead of me.  They don't tell you why they don't hire you, they just don't hire you.  Form letter.  Sometimes, excited interview where everyone seems to love you.. then form letter.

Perhaps now I know why.

You're distracting from the issue, which is that you were on an-screen actor on the film The Heaping Bouncy Breasts That Smothered a Midget  that you made in 1988 with your brother Zachary Snigg (aka John Bacchus), and your friend Jared Bushansky.

Your credits on this film, as shown below, should be reinstated. 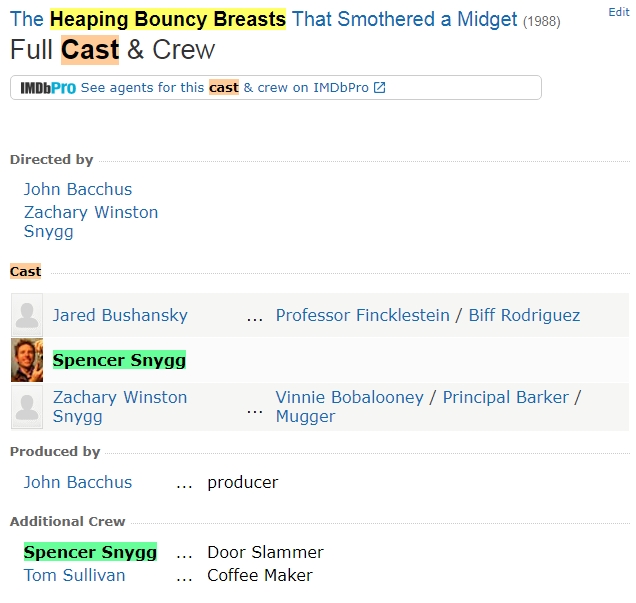 @keyword_expert  I just read the review you linked to.  I think the person writing the interview didn't know or didn't care that I wasn't involved with those other titles.  Zack has a big fan following in the B-Movie world, while that crowd knows nothing about my documentaries and arthouse films.  If a B-Movie focused site wanted to get readers excited, they would list Zack's title's, not mine.  The films we made together get a lot of reviews.  They don't call us to fact check before they print.  And even if they did, they would be calling my brother, not me because he is handling the sales and might not want to make a fight over it.   He cares about sales.  Being ridiculous in the B-Movie world sells.