I'm not really sure what to make of this credit that I saw on The Lawnmower Man last night. Stephen King has a writing credit that looks like:

First, a little history. Stephen King sued to have his name removed from the title of the movie because the movie has no relationship to his short story of the same name. New Line defied a court order and still released it as "Stephen King's The Lawnmower Man". They were found in contempt and King's name was eventually removed.
However, just being billed as "Stephen King's The Lawnmower Man" doesn't seem to be enough for a writing credit. If this was his only billing in the movie, I would think that this credit should be removed as it isn't valid. However, I suspect he received and additional credit of the form "based on the short story by". This has been removed and doesn't exist in any form that we can see today. Does anyone know if he was credited in the movie before they were removed? Or should this credit be removed and moved in to the trivia section (it may already be there)?

Here is a youtube clip with the credit: https://youtu.be/Wktc6NngN5U?t=10 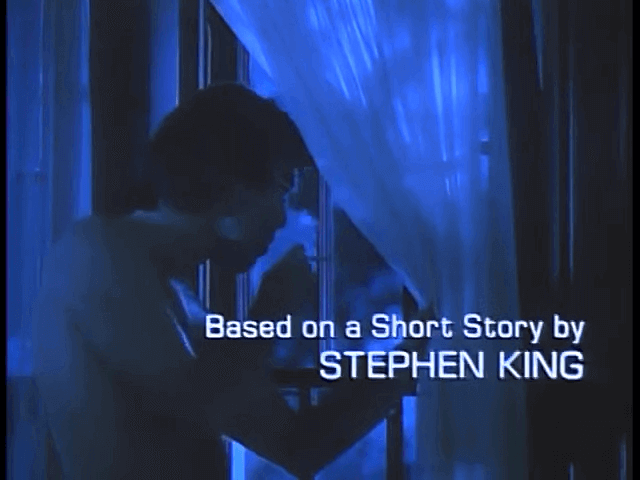 So I think it should be modified to have "based on a short story by" attribute only.

Thanks for your leg work. It appears my assumption is correct. However, I disagree about the second attribute. It is useful for someone auditing the writing credits and watching the movie and noticing that the attribute is not on screen without having to dig through trivia or alternative versions.

So, IMDb rejects this correction. Can an IMDb employee update it:

This credit has been rejected. You need to correct this credit before it will be accepted.

Maybe "credit only" would apply?

"credit only: removed following lawsuit" is also accepted by the form.

@Peter_pbn​ Except in all modern prints, he isn't credited at all.

I disagree about the second attribute. It is useful for someone auditing the writing credits and watching the movie and noticing that the attribute is not on screen without having to dig through trivia or alternative versions.

OK fair enough but I think you agree "title only" attribute is kinda inaccurate right?

@mbmb​ Yes. That attribute is completely wrong and that is why I came here to discuss it. I appreciate your research in to the matter.

But it sounds like this is not possible to do, since you indicate that "the system now won't accept two attributes."

Can we get an employee to update the attribute for Stephen King based on the discussion in this thread?

Upon digging further, the lawsuit was partly overturned on appeal, with this final appeal decision.

The credit should reflect what was originally shown on-screen ("based on a short story by") and I have now corrected the credit attribute accordingly.

@Michelle​ The Second Circuit appellate decision that you found was far from the final word in the litigation. That decision was issued in 1992, and it only involved a dispute over a preliminary injunction in the case -- in other words, what should happen temporarily while the case was being litigated.

As discussed in the 1994 ruling, the parties entered into a court-approved consent decree in 1993. The consent decree required New Line to remove King's name from everything associated with the movie:

Defendants, their parents, affiliates and subsidiaries, and all officers, directors, agents, servants, employees, licensees, distributors, successors and assigns thereof, and all other persons or entities in active concert or participation with any of them ... shall not use Stephen King’s name, directly or indirectly, anywhere in the world, on or in connection with the motion picture ... entitled “The Lawnmower Man” ... in any medium or format ... including, without limitation, ... distribution on videocassette for home use or otherwise ... or in connection with any advertising or promotion of any of the foregoing. ...

To summarize, there was an approximately 14-month period between the release of the film and the subsequent consent decree when New Line marketed the film as based on King's short story. After that, New Line was prohibited from doing so.  And there was subsequent litigation after the consent decree, but that subsequent litigation (and the 1994 decision) did not really involve King's on-screen credits, but rather the labeling on the packaging for physical releases of the movie.

Although it may be hard to find a copy today of the film showing Steve King's name on it, the fact is that King's name originally appeared on screen with the labeling "Based on a Short Story By" (as shown by @mbmb).  IMDb is a database of factual information; IMDb is not required to remove King's name from its data just because the consent decree altered the relationship between the parties starting in 1993 (more than a year after the film was released).

The bottom line is that I think you have made the right decision here to list the credits as "Based on a Short Story By," because that's how the film was in fact originally released. But I also think you have cited the wrong court decision, which was not truly the final decision in the litigation. The 1993 consent decree and 1994 district court decision are more relevant than the 1992 court of appeals decision. The 1992 decision involved preliminary issues and was not the final word.

I don't think anyone was arguing King's name should be removed from the title in the IMDb database. I worry that removing the attribute (credit removed following lawsuit) will lead to some confusion. It is documented in other places in the title why this happened but anyone watching the movie and auditing the credits might have some questions.

@adrian​ Since the system won't accept two attributes, would it make sense for the attribute to look something like this?

(based on a short story by - credit removed following lawsuit)

(based on a short story by) (credit removed following lawsuit)

Although contributors apparently don't have the power to make it look like that (with two attributes), I wonder if IMDb staff have that power.

Based on the full scope of the discussion in this thread, I believe the IMDb entry for this title should appear like this:

@adrian is correct that contributors don't have the power to add two attributes to a credit. I tried it for this credit and got an error message that this is not allowed.

With that said, are staff allowed to make the credit appear like this? If so, that is what should be done.

Thanks for all the additional information, we have now updated the credit.

Here is what I am now seeing on the reference view for this title:

Could you please respond to my suggestion to make it look like this instead?

Yes it does take a little to update on the site, but that is how it will show.

@Bethanny​ Perfect. I thought that might be the case, but wanted to be sure.