McDonald & Dodds: What is correct episode number for episode The War of Rose (either 2.3 or 3.3)?

So it looks as if it was shown as 2.3 in countries other than the UK, one year before it was first shown in the UK.

The makers even had to reshoot some scenes for the UK showing to avoid a continuity error because it features a senior officer who was described as having left the police station just before episode 3.1 Belvedere. What a mess!

The are effectively two versions of the episode in question in circulation - the original one which could be seen outside of the UK, already in 2021 (or you could see it by buying the non-UK DVD - like the one which came out in Germany for example) and then there's the one with reshot scenes and thus a slightly different cast list, which was only shown later in the UK and is currently on the ITV Hub. Since I'm not in the UK, I bought the German DVD to be able to watch what I believe is the complete series 2 with its 3 episodes.

My understanding is the same as yours, that it should be listed as 2.3 and in fact I have already corrected it to 2.3 twice (!!), but although the corrections went live, it has subsequently been changed back to 3.3 again - twice (!!), so I'm also puzzled.

Just a suggestion, but - there is also a possibility it could/should be listed twice (!!), since each version has its own cast list. If it is only listed once, then the cast last will always be partially incorrect and not show the work of certain actors. The cast list is currently incorrect and has already been sent to imdb for verification like that by someone - making it harder to correct it to the original cast. Bonkers!

The title is also slightly incorrect. The ITV Hub and the German DVD both display the title as The War of the Rose. I've submitted a correction.

I changed it to "The War of Rose" last year because that is what was on screen in Denmark. It is still that way in the streaming version I just checked.

It is also the same way in this version, supposedly from ITV: 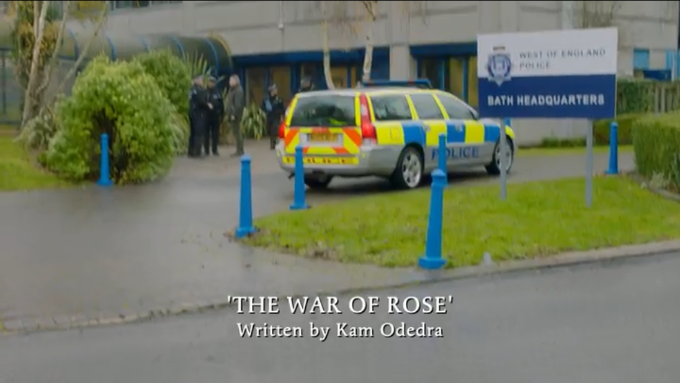 I think ITV changed the title at some point and again we have two different titles in use depending on where one views the programme.

Indeed, I was likewise expecting the German DVD to have the original title i.e. The War of Rose, but instead the new title The War of the Rose was used - at least in the disc menu. 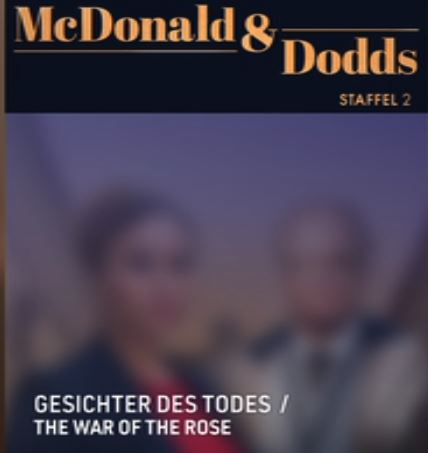 The text that accompanies the episode on ITV Hub uses The War of The Rose, but the on-screen caption is The War of Rose in both the Hub and broadcast versions.

By the way, in the German screen cap, "Geschichter des Todes" means "Story of Death" (probably a German explanatory series title) and isn't the German for "The War of (the) Rose".

At the time of writing this, the episode is listed as 2.3 and the cast has been corrected and is correct for the original, non-UK version, - the UK release date of 3rd July 2022 is obviously incorrect however.

A further issue that will arise is the episode numbering for series 3. The episode 'Clouds across the Moon' will be the fourth or 3.4 in the UK, but only the third in the series or 3.3 elsewhere...

Why is the UK release date obviously incorrect? It is the same date that Martin indicated above.

The date is incorrect as an episode with that exact cast (as shown at the time of writing this) was not released in the UK. The cast list reflects the international release.

I have submitted a correction to remove the UK release date. Whether this will be accepted, I do not know.

As long as the episode is only listed once, the UK release date should of course be listed on that episode, as should any alternate version info.

But should it be listed once or twice?

Three actors who appeared in the reshot version, do not appear in the original / international version.

Yes, you have raised this and should probably wait for an answer before making edits. I don't personally think IMDb would list it twice.

Note that it was previously listed twice and Martin asked for one to be removed, which eventually happened:

I agree with Martin's request to have the episode 3.4 changed to 3.3 and the episode which was only later aired in the UK renumbered to 2.3. This change initially went through, however it appears that another editor has since renumbered the 'Clouds' episode from 3.3. to 3.4 - meaning there is now a gap and no episode 3.3.

I then submitted a correction to renumber 3.4 as 3.3, including an explanation.

This submission has yet to be dealt with.

If it is not accepted and the gap remains, there will be the temptation for an editor who spots it, to add the British-release version of the 'Rose' episode as 3.3 - meaning it will be listed twice - each version with its own (correct) cast.

I agree that we need an official answer as to how this should pan out.

At the time of writing this message, the 'Rose' episode is currently listed as episode 2.3 and the cast list is correct for the international release, as taken from the credits on the German DVD,  and has been submitted for verification.

Update: The submission to remove the UK release date, has not been accepted, so as things stand it remains incorrect. I am not going to to submit this edit again, so the issue needs to be addressed some other way.

@Peter_pbn​ I think in that previous thread things like reshots and cast differences were not considered or known yet.

Update: The submission to change the name of the episode has been accepted and the title was changed from 'The War of Rose' to 'The War of the Rose', but since then has already been changed back again by another user. Again, here I'm not going to submit any further change, though it remains unclear which title is the correct one.

Titles on DVD menus or websites do not determine episode titles when there is a title on screen in the episode. You have not provided any reason to think the title on screen has changed at any point.

You could add a trivia item about the title variant.

@Peter_pbn​ I never said the on screen title had changed, nor do I think that titles in DVD menus or on general websites determine a title.

Since I watched the episode on the German DVD though, I saw that the title had changed. There was not an on screen title in English in the episode I watched - hence my submission - which as stated, has since been reverted and I will not be resubmitting, as I agree it is the on screen title which should override others.

Having said that, ITV have clearly used the new title for marketing/promotional purposes, for the title 'The War of the Rose' is what appears on the ITV Hub page for anyone who wants to select and see the episode.

It will be interesting to see what title is used on the newer DVDs.