I am an experienced user reviewer however when trying to send in a review I now get a red message telling me that I am using Invalid Characters. I looked on your review guidelines page to see which characters are not allowed but could not see any information about it. I am only using regular letters, numbers and punctuation: . , ' ( ) " ? Surely these are not disallowed. Because of the message I cannot submit my review.

You sure you're writing the reviews yourself, and not copying them from elsewhere?

I've had this problem a few times before when copying plots to add as plots on IMDB, and copying addresses to add as filming locations on IMDB, and it was the letters which were the problem, not the symbols or punctuation marks.

Some of them you could tell which letter or letters were causing the problem.

However others you couldn't tell which were causing the problem, as they looked identical to the naked eye.

If I remember correctly IMDB would show me a code/codes for the letter/letters which were the problem, which I then Googled to find out what they were, and once I knew, I simply deleted the problem letters and replaced them.

Thanks for the information. It's good to know that IMDb monitors content. However, I'm still in a bind: the writing is all original and I have no way of knowing which words or sentences are causing the problem. As the movie I was trying to review involved racial issues, perhaps certain words were being flagged. Perhaps IMDb suppresses free speech... I hope not. I didn't think my comments were inflammatory but who knows how robots think. Thanks again for your help. Perhaps it's just a technical issue...

It's just frustrating that there is no-one at IMDb to go to when you can't submit a review and you only get an incomplete message instead: Sorry, your submission contains the following invalid characters: ‎. Please correct them and resubmit.

In order for our staff to assist, can you post the exact review text here so I can best identify what may be triggering the Invalid Character Warning?

Thank you for your reply. Please see below the text that I have been trying to submit. The movie is "Aretha" (2021). I hope you can find the problem.

How do you truthfully tell the story about a black ‎woman of the 20th century through the lens of the 21st century agendas of power-driven utopian ideological movements which themselves have inherent philosophical contradictions? Quite simply, you don't, you can't.‎

In this sham of a portrayal of the life of one of the 20th century's greatest vocal artists, Miss Aretha ‎Franklin, as she will always be known to her hard core fans, the eponymous subject, along with all the ‎women in this movie for that matter, is portrayed as being “always nice”. Aretha was nothing of the sort! ‎‎(Just think Whitney.) Meanwhile all the men in her life are portrayed as being “constantly toxic and ‎controlling”. Surely it is untruthful to portray a character as "always virtuous" at the expense of most of the other main characters – her father, husbands etc. To make matters worse, the white musicians and publicists who crossed ‎the race line to work with her, rather than being congratulated for their bravery amid criticism, are ‎portrayed in this movie as being racially insensitive while her largest white fan group, male homosexuals as ‎they were called then, are completely ignored - these groups are simply not on the "good list" of this ‎ideologically driven movie. Equally problematic is the sketchy handling of the artist's dabbling in female ‎homosexuality; it is yet another facet confusingly constrained by the film's propagandistic agenda. ‎

While her fans may revel in the chance to see Aretha so amazingly well recreated and singing on stage ‎again (thanks to Jennifer Hudson and the marvels of modern technology), we are let down horribly by ‎a shoddy script, tasteless direction and most disappointingly of all - dishonesty.‎

I was excited and grateful that it seemed that someone at IMDb was going to look into the reason why I was getting glitchy messages when I tried to submit my review of Aretha (2021). You asked me to send you the text which I dutifully did.  Unfortunately you offered no acknowledgement of receipt, and now a week later there is still no explanation for the glitching.

Am I left to wonder forever what the problem was? Am I no longer a person worth replying to?

Having written a number of user reviews for IMDb over the years and subsequently having felt that we had a mutually respectful relationship, this sadly leaves a sour taste in the mouth.

You have continually ignored my requests for a reason why IMDb has censored my user review of Aretha (2021). I can only assume that as an administrator you have a personal political view and you are wielding your position to decide who gets to speak and who doesn't. A sad day for IMDb, who would have no reason to hide its rules and policies behind hostile silence. Fortunately for me there are still other avenues of free speech upon which one may  tread. Good luck with your empire IMDb.

My sincere apologies for the delayed reply, we have been short staffed this past week and are working on catching up.

Thanks for posting the review text, I was unable to locate any violating characters that would trigger the Warning.  Can you try submitting your review again, and if you see the same Warning display, take a screen grab and post it here? Can you also confirm what device and browser you are using when trying to add this review?

Once I have that additional information I can then forward the information to the appropriate tech team to investigate. 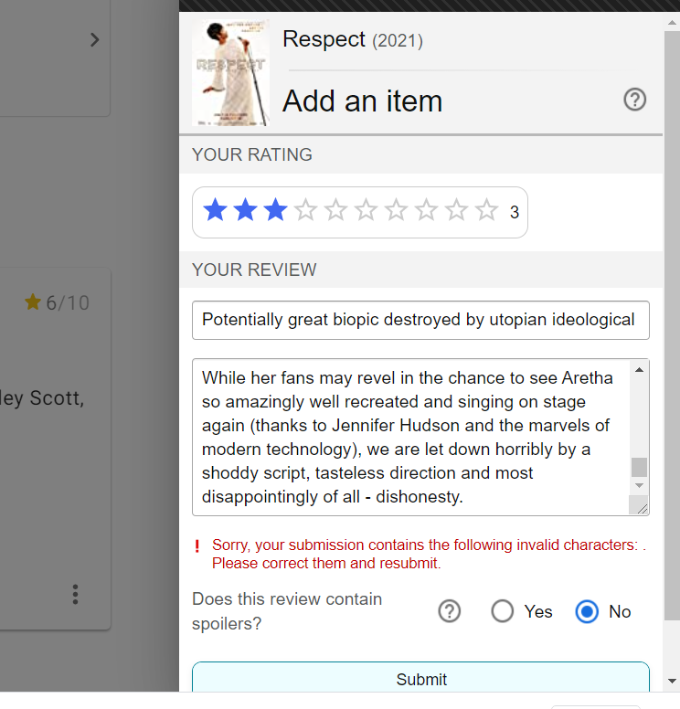