" Hare Krishna! The Mantra, the Movement and the Swami Who Started It All"

Other cast members were successfully added to <www.imdb.com/title/tt6842524/fullcredits> by me before and after Hari Sauri Das (<http://www.imdb.com/name/nm8859601/>), but Mr. Das was rejected for no apparent reason:

Other uncredited cast members were successfully added by me to <www.imdb.com/title/tt6842524/fullcredits> before and after Howard 'Hayagriva' Wheeler (<http://www.imdb.com/name/nm8187996/>), but Mr. Wheeler was rejected for no apparent reason:

I know that one of my colleagues has already been in touch with you regarding the credit for Hari Sauri Das which is now on the title. The credit has been accepted and is live on the page for Howard 'Hayagriva' Wheeler but as it has the (uncredited) attribute it won't show as a name page cannot have a 100% (uncredited) filmography. Please note that a cast member needs to have at least one credited entry in the database before we will list their uncredited work. If we have accepted uncredited entries, these will automatically go live upon acceptance of credited entries.

However please note this section of the cast guide for documentaries: "For documentaries or talk shows where the people appearing on camera are generally not in a separate cast list, their first onscreen appearance where they are identified either by a caption or spoken name is used to determine the order."

Does Howard 'Hayagriva' Wheeler conform to the above exception?

Thank you Will, for your kind attention to this matter.

However, regarding Howard 'Hayagriva' Wheeler, I could give you an example of a cast member having been added even though she has only one listing, and that one being uncredited!

Also, just now I found him in a third movie, and here is a screen capture: 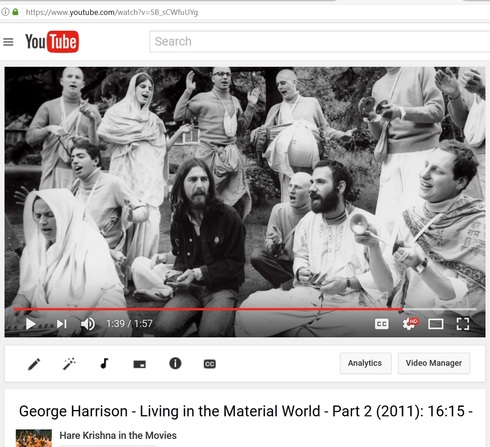 That's Mr. Wheeler, with the black beard, just to the right of George Harrison with their legs almost touching! Mr. Wheeler has a masters degree in English, and here is his most famous book: <https://www.amazon.com/Hare-Krishna-explosion-consciousness-1966-1969/dp/B0007B6RN6/>.

If you would be so kind, please make an exception for him. Perhaps, with your prodding, they'll list him this time:

Yes but is there a separate cast list on the title and is he referred to either by his name or via an on screen caption? If not then he should be listed with the (uncredited) attribute as he is currently to align correctly with our policies.

But you DO make exceptions. Here's proof:

I could give you another exception if you want.

And yes, there IS a separate cast list for uncredited cast members.

Also, if he was "referred to either by his name or via an on screen caption," then he wouldn't be uncredited.

The reason that credit displays on the name page is due to the age of the title it is attached to. We have certain display logic rules for earlier titles which are different to newer titles.

BTW, 2 days ago, Mario 'Mahatma' Pineta Freire (<http://www.imdb.com/name/nm8163493/>) was rejected for some unknown reason, even though he has an onscreen credit:

Thanks I've added his credit to the title.

BTW, how old does a movie have to be in order for the rules to be different?

Where is that documented?

Probably in the code written for the database.

Seems like a coin toss. I just tried adding uncredited cast members (with no onscreen credit for any other movie) to a 1966 film and they were all rejected!

OK. They've been added now. It just took a little longer than usual.

The 1990 cutoff year is documented at http://www.imdb.com/help/search?domain=helpdesk_faq&index=1&file=uncreditedcredits:

You need to have at least one pre-existing credited entry in the database. We will not display filmographies consisting exclusively of uncredited work. We may make an exception in very rare/specific circumstances (e.g. on movies released before 1990, episodes released before 2000 and/or for high-profile credits, such as an uncredited cameo appearance by a celebrity), but in most cases we will not list an uncredited credit unless you have a pre-existing credited filmography.

Basically, IMDb is reserving the right not to post uncredited film work from before 1990, but on the other hand, often they are willing to do so.

In the case of the "high-profile credits, such as an uncredited cameo appearance by a celebrity", I'm not sure what might qualify under that exception. After all, if someone is a celebrity, it seems unlikely that they would have only uncredited work to list and would never have received an on-screen credit in their entire careers.

gromit82, you're the best! Thank you!

Apologies for the confusion, previously this isn't made clear in the main cast submission guide but I've now updated it to include the information. https://contribute.imdb.com/updates/guide/cast