We noticed recently that someone has falsely added themselves to our production title of movie: Madison and the Happiness Jar.

This person is adding themselves to multiple listings spanning from Australia, Canada and Middle East. Firstly it's wrong and secondly it's impossible that someone has worked on that many films around the globe during a pandemic with no travel. Hilarious! I mean he has thirteen credits listed from 2020-2021. THIRTEEN! No one works on that many projects in less than a year especially when there has been lockdowns as well...

I already did the correct thing of submitting to IMDb to review straight away! This is what I sent and cannot believe that the team DECLINED IT!! Normally IMDB team has been so helpful and I'm disappointed they have not done the correct thing by our production and allow this fraud to keep adding themselves to productions they NEVER worked on.

What I sent as explanation on request to remove it:

As an official member of this production and the Producer, I immediately ask this person be removed from this film and credit. We do NOT know who this individual is who has taken it upon themselves to add their name to this film that they did not have ANY involvement with whatsoever. We are happy to provide screen grab of the credit list on film as proof if needed. This is incorrect. This is false. This is misleading and needs to be removed ASAP. Our legal department representing the film have taken down this individuals contact information and will not hesitate to reach out, should they add themselves again and this not be removed. Thank you.
The response:
Reason: Unable to verify.

How can you not verify when I am the producer? And a confirmed member of production telling you

I ask for this to be REMOVED ASAP.

Here's a link to the film on Amazon Prime: https://www.amazon.com/dp/B096ZRHYJV

You'll notice MY NAME (Mikaela Phillips) is the only Producer listed. Correctly how it should be. I ask this to be considered as substantial proof.

Please support the truthful filmmakers on removing this fraud. It's highly unfair and we just want to be seen and heard...

Hilarious, he even somehow managed to add a false festival award win to his fake title page: https://www.imdb.com/title/tt12639146/awards

I thought proof was mandatory at least for award submissions. How he managed to do that I wonder.

That title page is fake because only evidence link he provided while creating the page is for a different movie from a director with a different name and his name is nowhere in the credits.

Award win is fake because no such thing can be found on festival's official pages, in fact it looks like festival did not take place in 2020, it was cancelled, and he's adding award win for 2020, for his non-existent fake title.

@forthehorde Thank youuu! See what I'm saying. I don't even know how this is allowed! It's so fake. IMDB Team needs to fix this!! Thanks for the comment, you can understand why we want him removed.

Yeah, it's all fake, obvious. Looks like he's just randomly adding his name to everything, whatever sticks, too bad it sticks to too many. I mean, someone shouldn't be able to add his name as producer to a movie that features some big stars just like that without any evidence.

@forthehorde totally. Thank you!! Let's hope IMDB can understand that as well. Cause he needs to be removed from our movie.

Oh it is possible, as there's someone who's currently working on 23 productions, and has done another 9 productions in the last 18 months alone.

Who is this guy?

A real actor turned producer, who is recognisable as someone I've seen on-screen many many times, mainly in straight-to-DVD films.

Why am I mentioning him?

I'm mentioning him because although his credits are real, unlike the guy above, the less serious problem with his credits, are that his character names don't usually match what appears on-screen.

However the main problem is that he's changed the credit order of his acting credits so he appears near the top of the cast, and he doesn't even try to disguise the fact by using credit numbers which haven't already been used yet.

I've updated the entire cast for around 3 or 4 of those feature films in the last month since I noticed, which not only contained incorrect credit orders, but also incorrect names, incorrect character names, incorrect attributes, and many many missing names.

I will be checking all the other productions in his filmography eventually, which I expect will contain more of the same.

Also even though it's blatantly obvious that this guys credits are fake, your deletion submission likely wouldn't have been declined if you added screenshots of the full credits as evidence.

How can you do that?

By uploading them to Imgur: The magic of the Internet and adding the link for the IMGUR page where you posted them to, as evidence in the explanation box on IMDB.

@daniel_francis_gardecki I did mention in it, I'd be happy to share full credits but apparently that was overlooked. Thanks for your idea. I have now re-submitted for deletion, providing link to Amazon and this post/conversation. Hopefully IMDB can support the real producers and production and not a fake, who is just getting away with it.

@mphillips I don't think that will be good enough as IMDB is owned by Amazon, and as far as I know, whatever is added to Amazon Prime, is added by the producers/companies, whether they're true credits or not, plus they usually don't include the full credits.

A feature length documentary from 2016, which I updated on IMDB earlier this year, is listed multiple times on Amazon and Amazon Prime, with the same 4 cast members, just like most other websites.

1 appears briefly in the trailer, but doesn't appear in the documentary itself. He's not credited either.

1 only appears in the documentary for a few seconds, and isn't credited at all.

1 only appears for a few minutes.

1 gets significant airtime, but is nowhere near the most.

Why are they the names mentioned on Amazon, Amazon Prime and other TV/film related sites then?

Most likely because they're the biggest names according to the filmmakers, so they think adding them instead of the people who appear the most and are actually credited, will get their documentary some more attention.

29 people credited on-screen as part of the documentary.

9 people who I recognised who are uncredited, but there's no doubt others I don't recognise.

And around 100 thanks credits, where most of these people are mentioned again.

When adding and correcting those credits (among others), I uploaded screenshots of the entire cast and crew as proof.

This documentary has at least 10-15 Amazon links in English.

While collecting some links for that documentary which I've yet to submit until I've sorted out the best ones, I noticed that Apple and/or iTunes also has at least 5-6 links for the same documentary in English.

Thanks for your report, all questionable data has now been removed from the IMDb page you reported.  I have also taken further steps to help prevent any future credit/data inflation on this page.

@Michelle How come ones you left were not "questionable"? I mean for tt12639146, already stated in this thread it's a full fake page, it does not exist, only proof he provided is someone else's random movie with a different name and already stated in this thread his name is nowhere in the credits in that random link and ironically that's the one you left most credits as finding "not questionable"

Let's look at the other movie you left as being not questionable (The Merger), it was obvious all of them fake of course but still rented it to check it since an imdb employee find that credit not questionable, must have a reason but no there was not. His name is still nowhere to be found. Someone named Gavin Baskerville is credited for that job he added for himself:

Let's look at the "Storage", the one he was supposed to work in crew when he was 10 years old, and no, still his name is nowhere to be found, closest worded credit is a "graffiti artist" and he's not the one credited for it 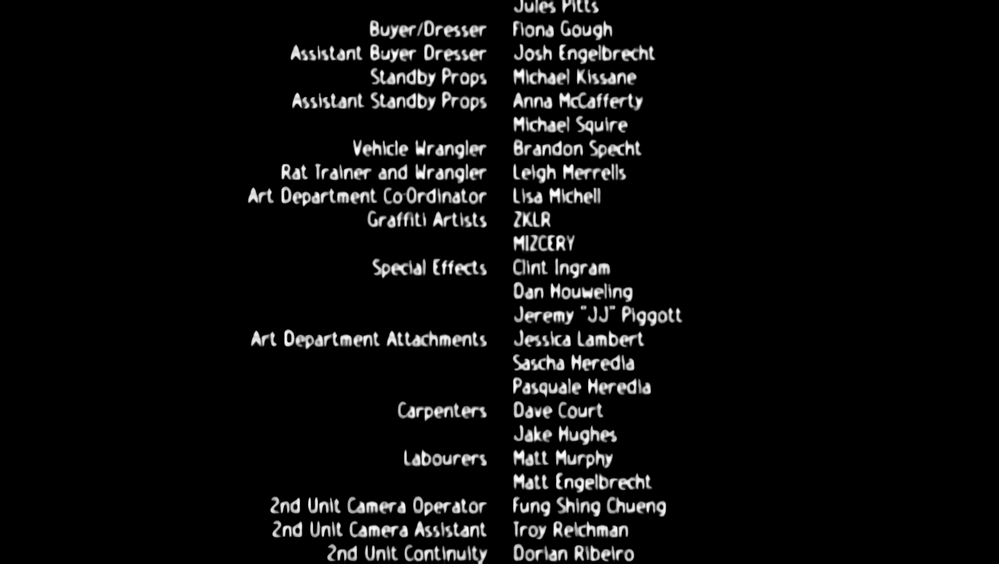 Let's look at the Indian movie "Partav", the one he was supposed to work when he was 12-13 years old. This is hard to find since it looks like that movie was never released out of a few festivals in India but luckily under their official trailer URL they credit someone for the job title he added for himself, and no surprise, it's not him, it's someone named Ashiq Hussain Rather.

So I'm having hard time understanding how remaining ones were not "questionable" and especially keeping most credits for the one I already reported as being full fake.

Thanks for this additional credit evidence, these remaining credits (for "Partav", "The Merger" & "Storage") have now been removed.

@Michelle How come ones you left were not "questionable"? I mean for tt12639146, already stated in this thread it's a full fake page, it does not exist, only proof he provided is someone else's random movie with a different name and already stated in this thread his name is nowhere in the credits in that random link and ironically that's the one you left most credits as finding "not questionable"

So I'm having hard time understanding how remaining ones were not "questionable" and especially keeping most credits for the one I already reported as being full fake.

And doing this twice actually. So weird and interesting. Will I need to open third thread for it?

Regarding the earlier credits reported, unfortunately, a few were missed which is why they remained on the site.

Specifically concerning the title and credit listings for "Outbreak in Iraq", this data has also now been removed from the site, as well as the name page for "Muntadher Saleh".