This film with Elizabeth Taylor:

Is this correct info (I can' t change release date, declined two times).

IMDb listed it as 21 April 1954 until last year, so other sources may also have copied IMDb. But IMDb may have a source for the edit.

But IMDb may have a source for the edit

Don't think it's possible for them to have a source for the edit. Likely someone wanted to change the title year to the production year, and did that by editing the year on first listed release date without any valid source or no source at all, and it was approved incorrectly. Like how they approved a 2017->1917 change on the 25 June release date of this title recently, which I fixed. Someone wanted to change title year, and changed only the year on existing release date for "restored version", but that specific date was for 2017 restored version release, it's even in the attributes, so a year change from 2017 to 1917 on that specific item shouldn't have been accepted because no source could be provided for it.

Anyway a similar case here, someone wanted to change title year and did that by inaccurately modifying an existing correct date.

AFI has a lot of details about its production and release. History section talks about production problems mid-Mar 1953, also confirmed by reports such as:

Details section lists production dates as "2 Feb--28 Feb 1953; early Mar--mid Mar 1953; 23 Mar--mid May 1953" so it was still in production even in May.
Which is also confirmed by contemporary sources such as Variety etc.. (there are tens more, coverage is wide)
From April 1953, reports they were still filming: 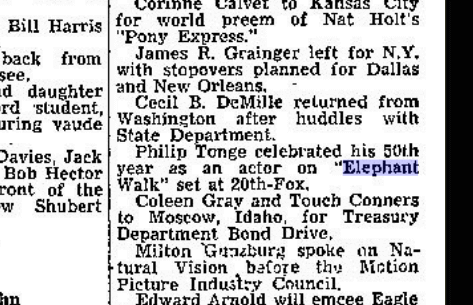 From May 1953, reports it was still in production:

Details section of AFI again lists 21 Apr 1954 as earliest date and premiere on New York. Again there are tens of contemporary sources from Variety, Hollywood Reporter, New York Times etc.. for this date as well.
So I'm pretty sure that year modification to 1953 was incorrectly approved.

Oh Michelle already corrected it while I was writing this :)

Based on several reputable sources (AFI and TCM) the USA wide release date was June 1954.  However, the film supposedly premiered in New York on April 21, 1954.

Based on these sources I have now adjusted the US Release date accordingly.

If it was a premiere, you should include attributes (New York City, New York) (premiere)

Yes, I missed the attributes, thanks for the reminder!  They have now been included on the existing Release date for the title.