Did I just accidentally delete all of our film's ratings by adding a release date?

I added a digital release date for my film and now it says coming to theaters this June, even though it has already been in theaters. This also means that all existing ratings and reviews are missing and says voting starts after release.

The film was already released in theaters but apparently did not have that release date listed.

I just now added the original release date (which was months ago) and would like to know if our existing reviews and ratings will return when that date has been approved by IMDB staff? 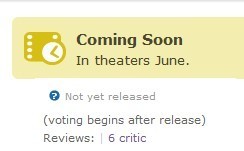 No you didn't delete the votes and reviews, they just won't be displayed until it gets released.

As well as adding the right date in, you might want to check Production Status to released too. This might help force the change and help everything reappear.

No worries. Keep an eye on it and let us know if it hasn't gone through after a few weeks, staff might be able to look into this for you. Shouldn't be a problem though.

Changing production status to "released" was the key and the ratings came back within a couple days.