Which of these depictions of an individual who is or will become a movie, television or streaming media pope is the most worthy of your devotion?See the partial list of movie and episodic current & future popes here: https://www.imdb.com/list/ls043828752/ Poll: https://www.imdb.com/poll/j1lB-P1BKHg/

Lorenzo Dardado Gone with the Pope The Pope (fictional pope)

That one from Godfather Part 3 lmao.

Why the Legend of Medieval Pope Joan Persists? 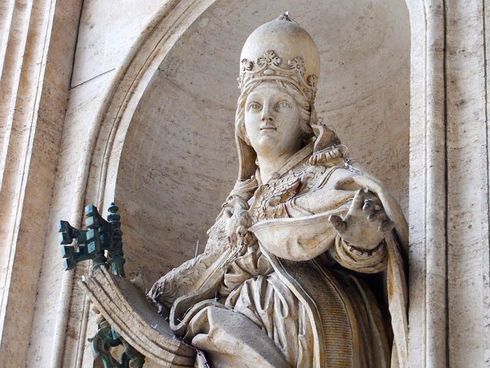 I like this poll and my vote would go to Jonathan Pryce as Pope Francis.I suspect that there might be some confusion over what the vote is for (the character/pope or the performance), especially since there are several real popes on the list. Since you mention depiction in the title and question, I'm assuming that you mean the performance but perhaps that would be more clear if you added the actor's name in the captions (instead of "Pope Francis, born as Jorge Bergoglio," perhaps "Jonathan Pryce as Pope Francis."The title could also be shortened and decluttered a bit: Favorite Pope Depiction?

Poll takers should vote for their favorite depiction or performance (pictured actor in the pictured title). I wanted to include all the notable actors who were cast as pope. The answer pool, in addition to depicting papal reigns, covers some ascessions to pope or depict their lives prior to becoming pope (ascending at the end of the story). Hence, the born as with their real-name is important, as it bridges all these transitions. I also included the name of each pope to reflect the number of multiple depictions of the same pope. Lastly, I thought it was important to note whether they were real-life, fictional or something else. So, it is a bit a tightrope to balance everything. Which of these depictions of an individual who is or will become a movie, television or streaming media pope is the most worthy of your devotion?I prefer the title as is "Favorite Movie or Episodic Series Pope Depiction?" over "Favorite Movie or TV Pope Depiction?" I don't want to use TV to encapsulate streaming depictions within the TV banner, because it is just one way users watch streaming titles. I reformatted the answers to focus on the depiction ie Jonathan Pryce as Pope Francis, with it being repeated on the image tag. The extra information is non-bolded and cited at to the bottom. I agree it a lot to take it, but in the end what is expected is what poll takers do anyways.EXAMPLE

I noticed that you linked Jeremy Irons instead of Jude Law in #2.