Hello,
I am noted that the local pronounced non-English titles in English are standard for IMDb pro, such as, 'Yeolhyulsajae' (*Korean official title '열혈사제' directly pronounced) for 'The Fiery Priest'. Another example is 'Squid Game', where we search by the official English title. But we never write 'Ojing-uh game', which is the Korean pronounced way - we would either look up '오징어게임' in its formal Korean title, or 'Squid Game'.
As the local pronounced title is not official, it contains informality when shown on each professionals' IMDb Pro page.
I am suggesting to conform the titles in their official English titles, instead of writing the word by word pronunciation of its local title on IMDb Pro.

Sometimes clients get confused as well seeing the local pronounced titles that are not in their knowledge.
We would appreciate our suggestion to be considered effective.
Thank you!

@tlee Thank you for your patience. The issue you were seeing on titles in the filmography tab for Name Pages should now be fixed. Any romanized Korean titles (along with other titles with multiple regional names) should now match the display title in the corresponding Title Page. Please let us know if you have any other questions or concerns, and we'll be happy to help.

@tlee  Thanks for the feedback.  Just to confirm, you are seeing these local titles on IMDb Pro vs. on the regular IMDb site?  For example, please can you attach a screen-grab of how https://pro.imdb.com/title/tt10919420/ looks for you?

@Col_Needham Thank you so much for your prompt reply. Squid Game was an example case -- it is one of the formal titles set up properly, I believe since it gained huge popularity. It is seen as Squid Game officially, however, if you look at the screenshot of its main actor Lee Jung Jae's page, other than the Squid Game, other titles are seen as unofficial, local pronounced titles.

Bojwagwan, should be 'Chief of Staff'

Eeo Siti, should be 'Air City' 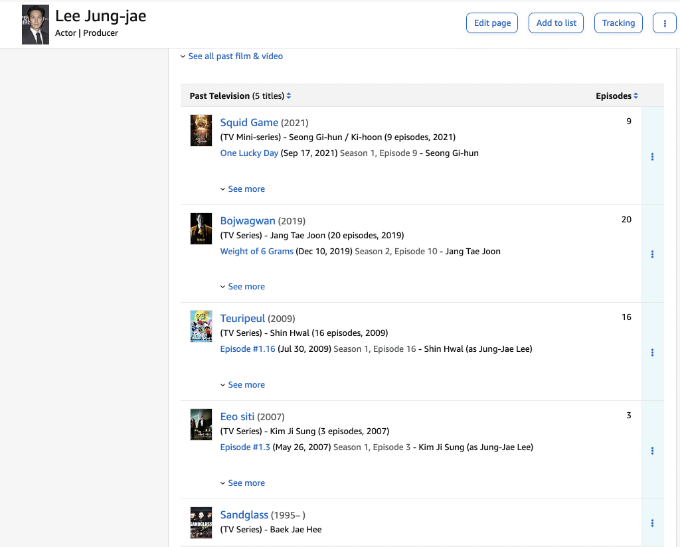 Below is a screenshot of my client's page; Lee Myoung Woo, that we hope could be modified along with the change in the standard system. The local pronounced titles embed much informality, while IMDb Pro is all about a formal database. We would highly appreciate it if the changes could be made effectively.
Thank you so much!

@tlee  Thanks for confirming the issue.  We will take a look at this.