Today (Dec 6) we are announcing an update to the List pages on the IMDb desktop experience. This update is part of the broader site changes announced recently (https://getsatisfaction.com/imdb/topics/upcoming-changes-to-several-imdb-features-du6man1opd5q0). After in-depth discussion and examination, we have decided to simplify the features and functionality for lists. We have merged “compact view” and list editing into a single Edit experience. In that one view, you can now modify your text and add, copy, delete and move items. We have also pulled List actions (edit, export, settings) together into a 1-click menu (the 3 vertical dots on the top right of the page). You will now also find two new options in the Refine menu: ‘In Theaters’ and ‘Keywords.’  Tech constraints on the new system prohibit us from continuing to support drag-and-drop from the Edit view; we appreciate your understanding. For more information about Lists, see the IMDb Help Center.

I can't delete some titles off my lists.  I can only move them.

This reply was created from a merged topic originally titled Progress Bar on IMDb Lists.

I'm wondering what happened to the progress bar that could once be seen on the right side of the screen, beside any movie list on the IMDb website. It's boxed in the image below. It was a very useful tool to have when navigating movie lists on the site -- particularly lengthy lists. Perhaps you can bring it back? :D 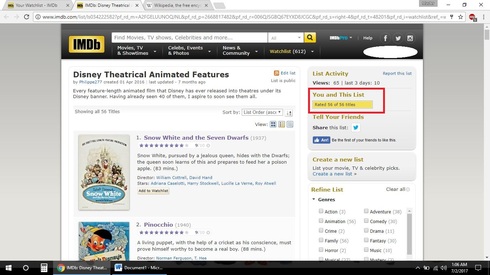 Okay, I left the conversation to give the staff a chance to act. I've been very disappointed by the results so far and by the sound of Karen's last post, they feel like they've basically "finished" the list system. Her suggestion to everyone to start posting in the general ideas section is just a way of burying future complaints and requests.

Since it looks like we're not going to get anything more out of the staff in terms of improvements, I'm going to be realistic with my demands.

Right now, IMDb have got me by the skin of their teeth. I recently conducted an experiment to find out if my popular list has financial value to Amazon/IMDb (hint: it does) so I feel empowered to make threats and demands.

I want at least one of the following three features pertaining to list reordering implemented or else I'm going to move my list over to my own site in the coming months:

Good to see you back here, watchinglotsofstuff.

Could you please clarify what you mean by the middle bullet's "compact editor"? Is it the old compact mode where you can refine the list you are editing, as outlined here:
https://getsatisfaction.com/imdb/topics/compact-view-for-title-lists-should-return-with-these-featur...
Or just a vertically shorter (skip the thumbnails and blanks lines between titles) version of what we have now?

I agree with your other requests, and encourage others who do to vote/comment here:
https://getsatisfaction.com/imdb/topics/edit-list-enhancement-requests
___
In case people have forgotten or were unaware, watchinglotsofstuff's super-list (certainly in terms of traffic) is

(I'm not saying it's the highest volume of all time, but it's darned impressive. I just checked one that has higher volume overall, and extant 2 years longer, but had "only" 297 views last week.)

Are you looking forward to getting started on watching the films though? ;)

Oh and I was creating my own desktop list manager for us with all of the missing features but... well, blame IMDb for the fact that it will never be available.

IMDb doesn't provide an API, which is a big but not insurmountable problem. The problem is that they go out of their way to prevent automated logins and activity on IMDb so I can't even write my own API. They use obfuscated and regularly updated JS to make automated logins all but impossible without writing a full JS interpreter. I figured out an ugly workaround but I just don't trust IMDb not to shut it down.

I have an early alpha build that draws data from and modifies a live IMDb list. It has far more options for reordering than IMDb's editor (e.g. position numbering, drag and drop, up and down buttons, compact editor mode, variable length pagination -- including no pagination at all). One of the really awesome features is that if you type a new position number into an item's textbox and then hover over it, a modal appears with the name of the film that you're going to displace (i.e. stuff that most list editors could only dream of getting from IMDb itself).

Of course, they could always reach out to me and support my efforts but the chances of that happening are asymptotic to zero.

Do you realise how arrogant and childish you sound? Who do you think you are making a list of 'threats and demands' and telling people to 'fix my shit'?

Your list had 850 views last week. IMDb received 690 million visits last month according to https://www.similarweb.com/website/imdb.com#overview so what makes you think you have 'financial value' to IMDb? As if IMDb will be fearing the financial implications of you leaving.

@Aaron: In the grand scheme of things, my value to IMDb is negligible (similar to IMDb's value to me). Meanwhile, in the real world, companies tend to listen to even singular users or clients when those people are a net benefit to them. Have you never complained to a business before, lad? Try it. You might be surprised.

You can read my earlier posts in this thread if you want a less combative, more constructive appraisal. I also just explained how I already did their job for them - a far better job, I might add - and that their policies keep me from offering an improved user experience to all list creators. I put my money (or time in this case) where my mouth is. What have you done except shill for IMDb?

Edit: I'd be remiss if I didn't also mention that the "value" I've previously spoken about has no relation to traffic and visitor counts. The obscure nature of my list drives actual sales through Amazon, which is what I confirmed in my "experiment". A single sale of a VOD release is worth potentially thousands of page views of ad revenue, especially in the era of ad block. Directly comparing traffic is not the correct methodological approach here. As a mildly amusing aside, I spoke to some people who said they bought films from my list because they were too rare to even pirate.

If IMDb would just reach out to me and give me some assurances that they wouldn't try to obstruct my efforts to provide an improved open source list manager, I would happily finish it. Lots of people would be grateful, IMDb wouldn't have to deal with many disgruntled listmakers and my software (tentatively titled "ILMg: IMDb List Manager") would add value to the site. It's a win/win/win situation and I can't understand how anyone could possibly be opposed to what I'm trying to do.

Sure, I might have gone a bit overboard with my non-sober posting but ignore that and focus on the far more important contribution I'm trying to make. Everyone who makes lists should be supporting me. I don't expect anyone from IMDb to give me their blessing though. Seems silly to me but what can I do?

@watchinglotsofstuff Dude, consider the constructive criticism and in no way an attack, but you're seriously misinformed if you think IMDB cares about your lists/list or that it has any financial value to them. That's like saying a multimillion dollar company cares when an irate customer says they're taking their business elsewhere. They don't.

Here's the bottom line, IMDB is owned by Amazon. Amazon's main concern is not user lists or user-generated content, they're concerned about product sales, ad revenue, and subscription-based customer service. IMDB's bread and butter comes from IMDBPro; a paid subscription that panders to hollywood elite. They do not care about free user-generated content, that's just an advantage for them.

Lest we forget IMDB completely obliterated the comment board a year ago. Some people had thousands of comments on there. Hours, days, weeks, years of blood sweat and tears poured into talking about the film/tv they love. And IMDB threw it away like it never happened. IMDB is a business, and businesses care about their bottom line.

We are lucky to have the lists still available. Believe me, I'm just as frustrated by the changes as you (I have over 40 lists myself, some public some private) but if you really think making "demands" is going to do anything, then you're really not seeing the big picture. I hope IMDB goes back to drag-and-drop, Amazon has it, why not IMDB? But stop thinking they give a crap about the free users. We are the peons in the bigger business model. My advice go to Letterboxd sooner than later, their main business model is film list creation. They will actually listen to your complaints and will keep their site on target for hopefully years to come. IMDB is an unreliable narrator.

I don't ﻿think they care. I'm as cynical as anyone you'll find.

If you accept the premise that IMDb just doesn't give a shit (which we both do), it follows that there's no point in not expressing things in the strongest possible terms. They won't care if I say "pretty please" and they won't care if I come in making demands like I'm the CTO so it doesn't really matter, does it? I also wasn't completely sober when I made that post.

Regarding Letterboxd, I've explored the option but it has several deal-breaking flaws for me personally. Most of them technical but the community is another. The community feels very much like IMDb for kids. I'd much rather roll my own solution than migrate to Letterboxd, I think. If I can manipulate IMDb's code to add back in the missing functionality, I can sure as hell create my own UI to my own tastes. Manipulating existing webpages is more difficult than building them from the ground up.

Anyway, yeah, the disappearance of the message board and PM system was a wake-up call. I wasn't active on the message board but it was frequently the only place to read interpretive essays on the endings of obscure Japanese horror movies from the '80s. That was the biggest loss so far and will probably remain so until they take away reviews. I think the end-game is to have no public-facing user interactivity whatsoever.

Short demo of my Chrome extension that brings back old features (e.g. drag and drop) and adds new ones:
https://vimeo.com/265873386

This reply was created from a merged topic originally titled The List has changed for the worse (In my opinion).

I like listing on IMDb, but I liked it more before. Now the listing feature is not as good, unpractial and too cumbersome. Why did you have to change it so you could switch places for the titles/persons from lifting them up and down with you mouse to having to change the numbers one by one? It`s especially cumbersome when you add a new movie to a list that have other movies from before because you change every number! Why? and could you change it back?

The feature you mention is commonly referred to as drag/drop. You may want to vote for/comment on the Idea here:

I don't understand your comment about changing the numbers one by one. If you mean that it's best to move one title/name at a time, I agree. But I hope you don't think you have to change all the numbers by hand.