IMDb is working on updates to the Title page. The new version of the page is mobile-responsive, meaning all features are available on devices of all sizes, and has a modern look and feel — otherwise it maintains all the functionality of the current page, though some features have moved on the page.

The new version of the page is available to a limited group of fans during a beta period. During the beta, some features are still under construction, and you may encounter bugs.

For more information, check out this Help article.

Everything is just too big, too much whitespace. The cast picture circles are massive.

Also, can you decide if you are light theam or dark theam, having both on one page is a spectacular fail.

The more like this section is a massive step backwards, of all the new designs, that one is spectacularly bad.

Is the new design meant to be an improvement or did someone decide to change it for the sake of changing. I'm not saying the current one is perfect and couldn't be improved, this this is just terrible user experience. Are you developing on a 4K monitor? (Bet you anything you are) It looks dreadful on 1080p, which should still be your default audience

Adding to user lists is too slow and clunky on the new Title pages.

Very often I add to the Watchlist, and immediately add to some of my custom Lists (like a separate one for the stuff worth watching together with my family). This simple experience became so much worse and degraded on the new Title pages. 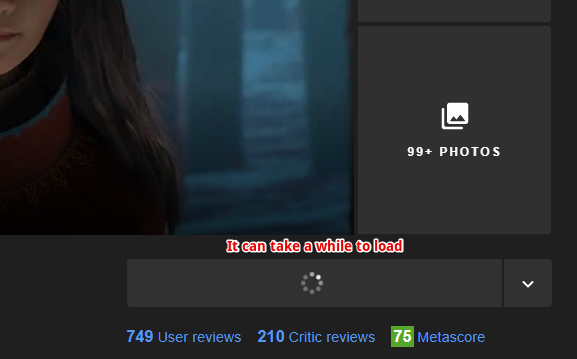 Before, you could just add to the Watchlist and hover the cursor to add to a different List via the Dropdown. It took about 2 fast clicks, the Dropdown appeared immediately.

Now, you have to click on add to Watchlist, then explicitly click to the down arrow, then wait for the Popup to load, then wait for all the Lists to load with the loading animation. The slower the machine/network is, slower the process. You can see for yourself by setting Slow 3G Network throttling in Chrome Dev tools, it becomes almost unbearable. Why can't it just be cached or preloaded, like before? At least the last 5-10 used Lists. 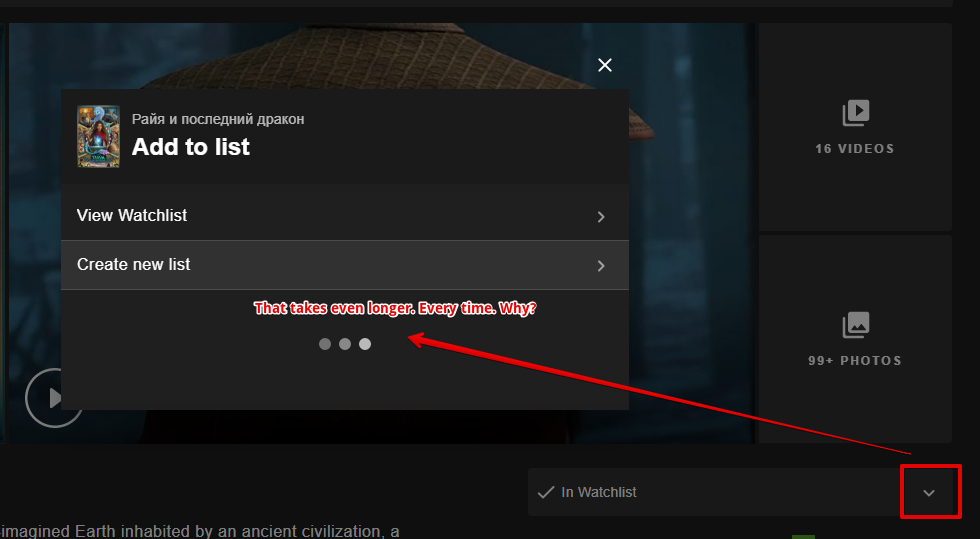 Also, I understand the need for a modal Popup due to mobiles, but the Dropdown would be so much faster, since it won't interrupt the flow. The current down arrow even implies for the Dropdown. The Dropdown could be a fast small list on hover (only PC can do hover), while clicking still could lead us to that new Popup. That would make the experience so much sleeker. And eliminate the issue when you opened the Popup, but can't add to the main Watchlist from there (and won't even see whether it was added, if the screen is small). That is confusing cause the Lists Popup UI is very similar to the mobile app, but the mobile app has the default Watchlist on top of it. 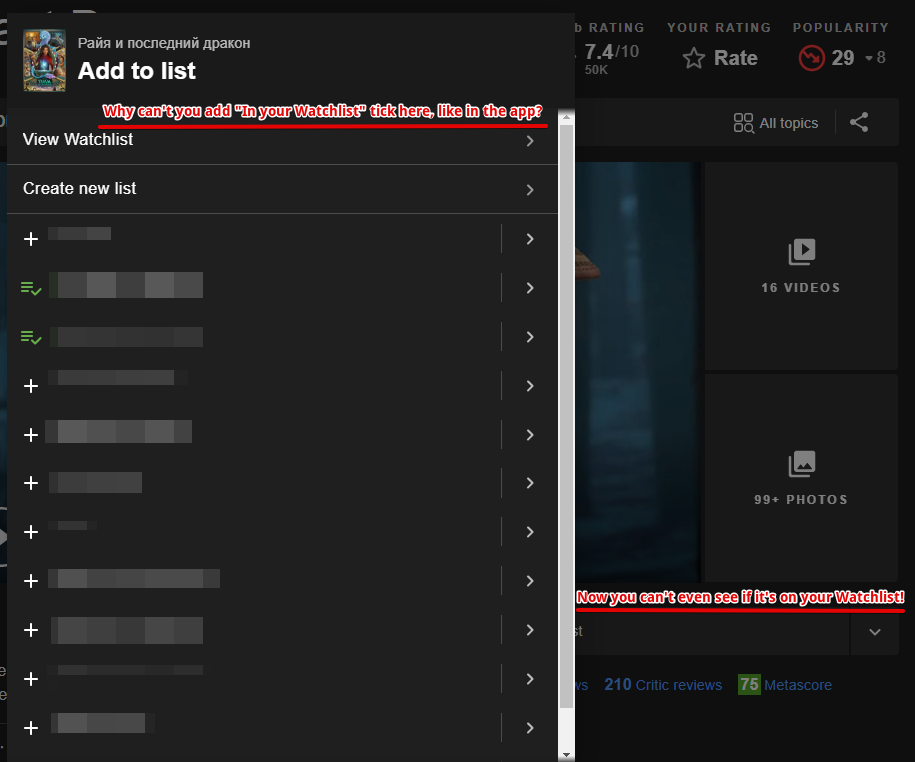 I often use the iPad, and the iOS IMDb app experience was very nice once I realized you can access other Lists by long-tapping the "Add to Watchlist" button. But since you're trying to make the website mobile-friendly, it is very strange that the List functionality can't even fit on the screen anymore. My iPad is a pretty common one, 9.7 inches 2018 (6th gen), I guess the larger ones wouldn't have this issue. But when I open the new Title page in Safari, it's just cut short cause the Lists button was moved to the very bottom and doesn't fit there. I'm attaching a screenshot. Even once the yellow top bar will be gone, the button still wouldn't be able to fit. The issue could be fixed by adding it closer to the poster instead. 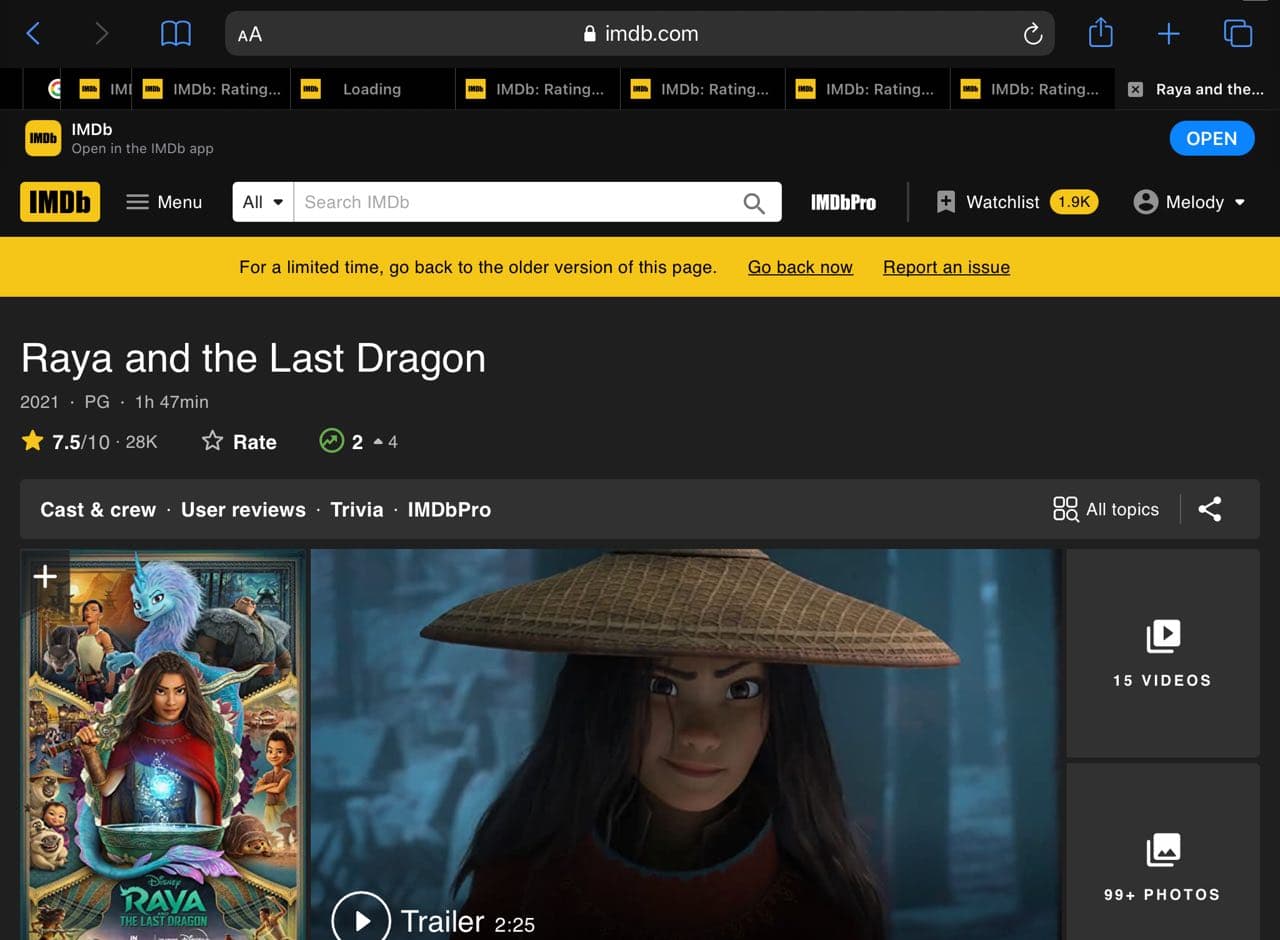 Note: This comment was created from a merged conversation originally titled Adding to user lists is too slow and clunky on the new Title pages.

Somehow my brouser view has changed the format of the look and feel of IMDB. i Must say I am not a fan of this new view. Is there a way to revert back to the old style?

The new page feels way too big - typeface and pictures are too large, everything feels spread out, more scrolling is required and one's eyes can't just scan from top to bottom, now side-to-side is required as well. The worst is the "Top Cast" section, why did this need to be puffed up so large? The old version is FAR superior to the new. The new version looks like someone needed some busy work so they decided to fix/mess with something that worked perfectly fine. Very disappointed in this useless change.

On the new page it would be nice if you did not have to scroll down to see the number of episodes and page around for additional info. Older page has me used to absorbing more information in a glance. New page is going to slow me down a lot. Current page I will put my mouse on scroll and pull down. By the time I got to the bottom I knew everything including, production and other details, 3 of 6 similar features, previous pages at the bottom, and user movie lists on the right side. The new page gives us a new advertisement with every click, right?  IMDB is my go to location and I don't complain about change … but you did ask.

@Hatchetbay Thanks for the feedback.  You do not need to scroll to see the number of episodes (see red highlighting added below) and all subpages are accessible via the "All Topics" menu (see purple highlighting below). For example:

Thank you for your responses.

On the old page for titles missing ratings there was an explanatory text like:
"Coming Soon
Releases June 11, 2021"

This has been removed in the new page version which is confusing.