IMDb is working on updates to the Title page. The new version of the page is mobile-responsive, meaning all features are available on devices of all sizes, and has a modern look and feel — otherwise it maintains all the functionality of the current page, though some features have moved on the page.

The new version of the page is available to a limited group of fans during a beta period. During the beta, some features are still under construction, and you may encounter bugs.

For more information, check out this Help article.

There's an extra click in adding 'Your Rating'. There shouldn't be 'Rate' button after you rate a movie. Choosing one out of ten star should be the only action to rate smth. No additional submit-type kind of button. In the old version clicking one of the stars was enough to complete the action. Please remove extra click, that's bad UX.

Moreover this excess 'Rate' button is not what I expect from usual online experience with rating or adding to favourites or watch list. So few of my ratings gone missing because I didn't see it. That's ridiculous that th old version had more modern approach! 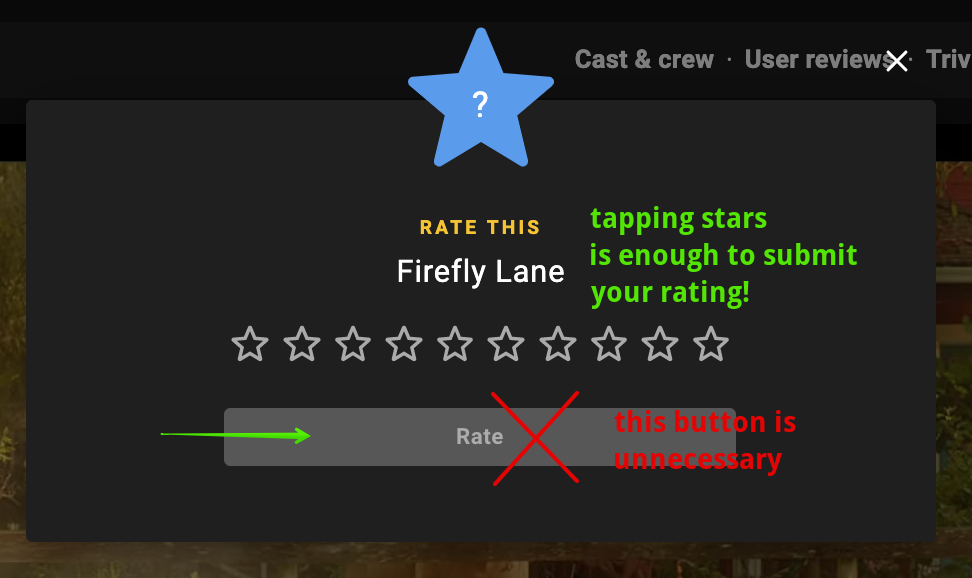 Great point, but the extra step is probably to prevent votes from being accidentally cast. Thankfully there is a way to rescind a vote.

Again — it's excessive. There is no user case for critical errors in this situation. Additional approval of a click rarely appears in UI nowadays. Only when it's absolutely necessary.  There's the light discomfort of giving 6 instead of 7. Easily corrected. And there's a chance you accidentally forget to click that Rate button — and this movie is gone from your watched list. Ratings are creating a history of movies you've watched.

Sure, but unintentionally activating a star adjacent to the one intended is different from unintentionally clicking/touching within a sequence of stars at all. Also, the extra step, unnecessary as it may be, is also a way to make "spamming" the feedback system less comfortable, thus slower.

I think more coherent lists is needed.    There is watch list and lists.   I  struggle with this.   In new screen you have big button to add to watch list but to right a pulldown menu to add to other lists.  Unclear why this separation.        I have two lists   Don's  To watch and Don's  watched.    It would great to be able ,while within that list, to move items to another list  without having to open the full screen view of the movie.    With pandemic we all are watching so much more content and sharing suggestions with other folks.     I know I can share my entire list, etc etc,  but isn't that also alittle top heavy.

You _can_ move from one list to the other - in Edit mode.

@bderoes agree but kind long process in edit mode, the easiest way is to (this is a feature request)

Btw, IMDB is kind enforcing only one list "Watch-list". But naturally people use them as bookmarks for more classification types: Like, Hate, Watched, Dropped, Recommend, Specific topic or genre (because there is no saved searches).

It recently occurred to me that the only way (I know of) with a current title layout to see attributes for Languages is to go into the editing stage and see there. It became quite a habit in recent years so now I wonder whether language attributes are even displayed anywhere on the website apart from editing.

Note: This comment was created from a merged conversation originally titled Visibility of attributes in languages

To be honest, I'm not sure why exactly this was merged into this thread, because problem actually predates the introduction of the new title pages.

Although, of course, since problem still exists there it might be a right call.

The wording "current layout" may have elicited the merge.

The Watchlist icon should not go over the movie poster. I would expect that image/button to be better placed next to the movie title.

I agree. I tend to interpret it as an invitation to add more images.

Slight complaint: the new Director/Writer/Stars box is unfriendly to browser action of highlighting text. It doesn't act like a web page anymore, it acts like a mobile app.

I would usually come over to IMDB and that top-line info was super handy in online conversations. "Who directed that?", or "What was the name of the co-star in suchandsuch?", or "How do you spell that name?", that was all top-line info and easy to copy-paste into a post or an email.

In the new design, this is currently difficult. Because the fields in this module are now designed around mobile/responsive use, clicking this box to highlight inadvertently triggers a click instead of a drag-select. (Also, "Copy as Link Text" seems to be disabled, making a right-click not work as an option either.) You can drag the cursor from somewhere off the module and get the text, sort of, but you have to take all the text in that case because it doesn't let you highlight just the reference you want.

Lower down the page, the Cast module works just fine for Highlight selection, but then the second Writer/Director/Crew box has the same problem of being one big app-style box instead of a collection of links. 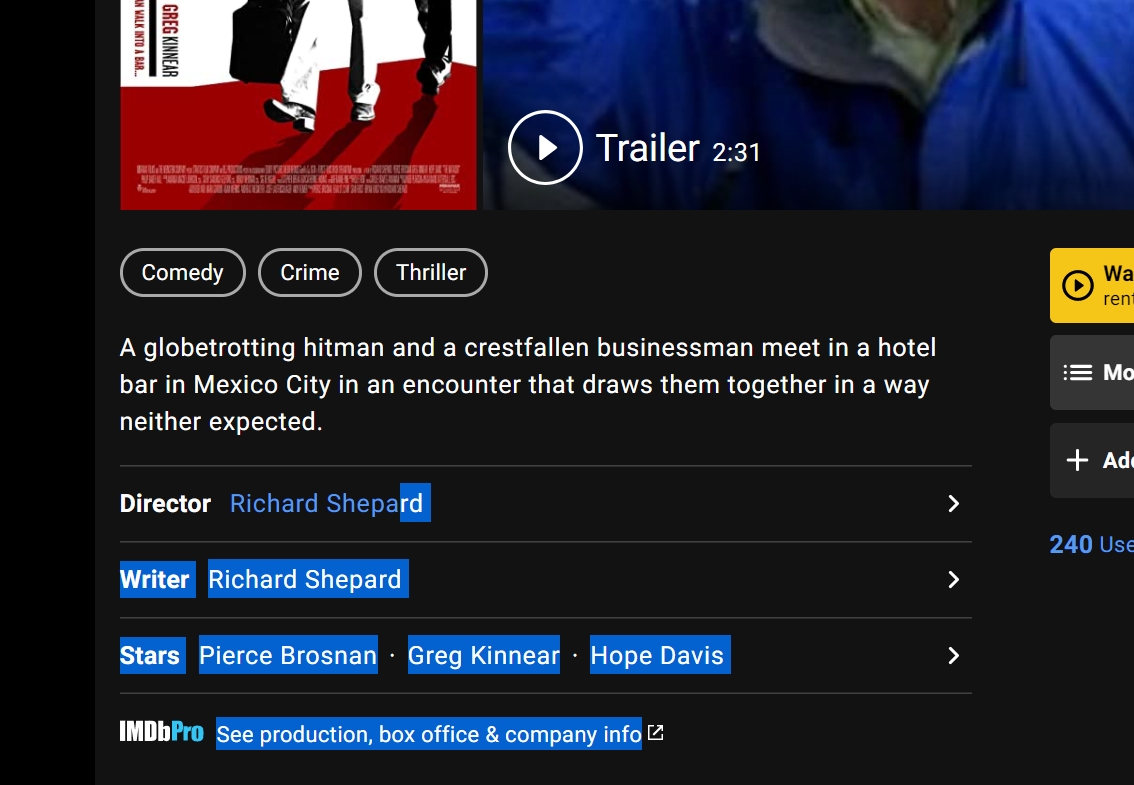 Hope this can be resolved. Best of luck with the redesign -- there are things I like and don't like about the look, but it's the functionality I care most about, so I'll leave it to others to comment with reactions to the look (I've been through web redesigns and it's a lot of work to please so many people,) as long as I can use the site as usefully as always then I wish you luck with the refresh.

On the new design, the Country of Origin data point ought to be displayed alongside release year and runtime underneath the title at the top of the page.

(Sorry if this has been suggested elsewhere; I couldn't see a way of searching this thread.)

The metascore is not available on the new version like it was on the old shown in the image, please add it next to the audience rating, it's so important to many. 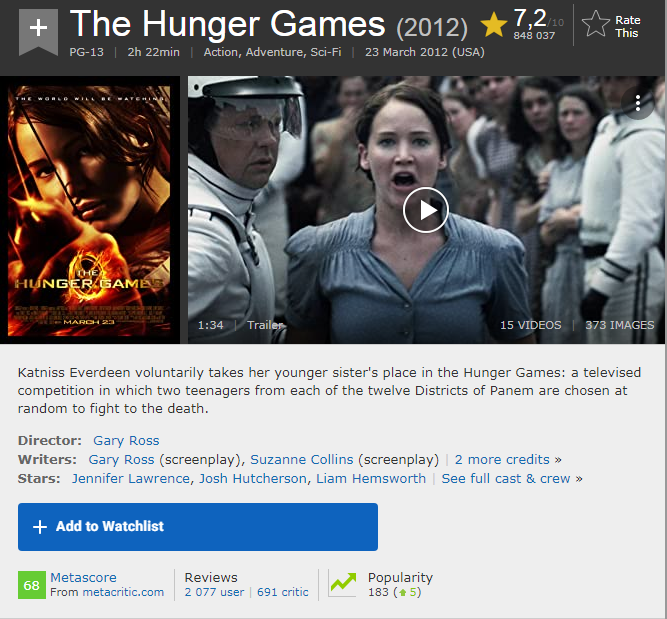 @ozako1514 Thanks for the feedback, but it has always been on the new page, please see the red highlight in the lower right of this grab: 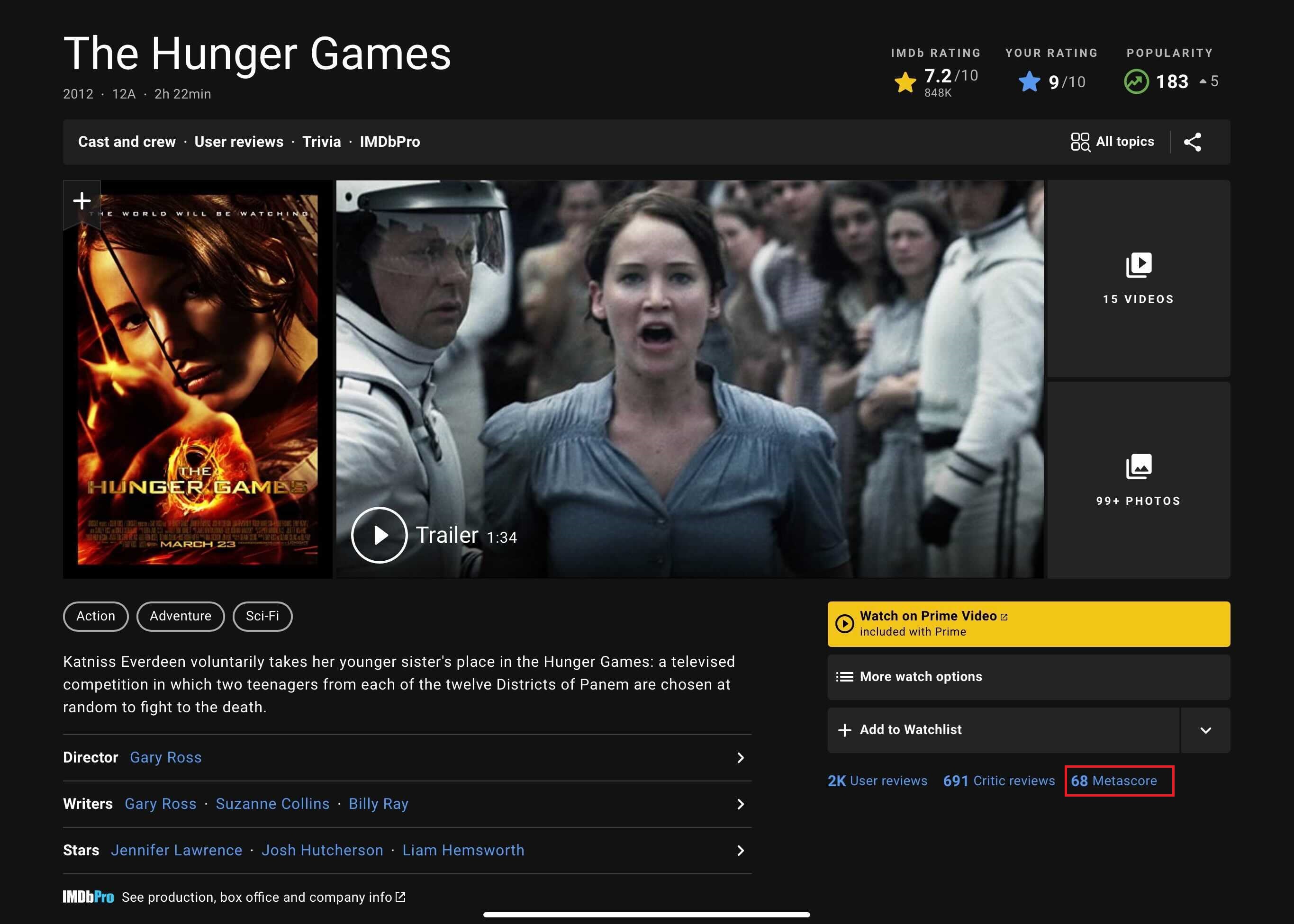 Interesting.  You've supplied an answer, which is shows the information is on the form.  But you've missed the point.  The flaming yellow box, which begins "Watch ..." will automatically have any intelligent person turn away from that part of the screen.

What was easy to see before, no longer is.  The pain of this layout to eyes and the brain, is akin to dragging cats across a chalkboard (and yes, I remember chalkboards).

So without realizing it, you actually agree with us when we shout this layout is garbage.

It's been 3 months now that this sneak peek has been available.  And yes IMDB has fixed some bugs to a completely unnecessary change.  How many people does it take to get the 'powers that be' to understand we don't want this picture-centric garbage layout.  How many more comments are needed?  Does it take a national riot, setting fire to police cruisers before anyone gets it.  A large number of us want the current layout to remain, and are willing to comment on it ... and everyone else is just getting too tired to complain about it.

The new layout has some major issues, some of which go against most common web development "rules"

For example giving users the most critical information they seek in one at a glance place, WITHOUT them having to scroll, doing this stops people leaving the site.

The other disaster is designing the new layout with developers having 30 inch screens, this makes them design sites for bigger screens, believe it or not, the most common screen by multiples of the nearest other screen is the 15" laptop, the new layout of IMDB looks awful on this.

The layout suffers from the disease of "too much whitespace" and designers using too many widgets, sometimes just because you can, does not mean you should.

Consider the movie Avengers: Endgame (2019), in the old format I could see all the pertinent information at the top without scrolling,

if I were to improve it I would have put the 8.4 rating along with the above right after the year or before the PG-13

But no, in the new layout we lose the Action, Adventure Drama tags and they are put below images, they are not text but in ovals that take us screen estate.

If you want people to browse and engage with your site you need to meet their needs, that all starts with the 2 second decision, is this movie something I want to know more about?

If I have to scroll I just make the decision on the limited information and leave, but if the information tells me that this is a genre that I like, say Action or Rom Com or whatever, then I read more. That is also why 8.4 rating should be there close to the title not orphaned over to the right.

Why does it matter?  Well if I read more I am more engaged with the site, I stay on longer and that means more advertising attention and conversion for the revenue generating aspect of the site.

I find the rest of the page disjointed and un-intuitive.

Most people will just leave and head over to Rotten Tomatoes or Google, others like me will just delete the IMDB bookmark and go elsewhere.

This is a great opportunity for anyone else (Netflix) to build their own competing site.

Note: This comment was created from a merged conversation originally titled Problem with new IMDB Layout