So you are lying ...
How do you explain it?
Thanks

Look closely. There is a note there saying

Our rating mechanism has detected unusual voting activity on this title. To preserve the reliability of our rating system, an alternate weighting calculation has been applied.

IMDb rating it not simple average but "weighted average" and in case of rating manipulation detection the weights are readjusted. Surely you can't trust this movie's rating, because without the corrected weights its rating is manipulated but on the other hand the weight correction may not be perfect.

IMDb publishes weighted vote averages rather than raw data averages. The simplest way to explain it is that although we accept and consider all votes received by users, not all votes have the same impact (or 'weight') on the final rating.

When unusual voting activity is detected, an different weighting calculation may be applied in order to preserve the reliability of our system. To ensure our rating mechanism remains effective, we don't disclose the exact method used to generate the rating.

Sadly IMDb's rating manipulation prevention is not perfect. The rating of the movie Gully is now proven to be manipulated and this is not detected by IMDb. I doubt that it even works. They probably had to trigger manually the anti-manipulation program for Anne Boleyn after reports. In the case of Gully is even more obvious, because the manipulators didn't bother even to write reviews.

IMDb shouldn't be counting votes from new users with almost no activity or should give them weights close to 0 and I have no idea what they should be doing when the manipulators are long standing IMDb members, like significant number of those who voted 1 for Anne Boleyn, but seems that they have their methods - they just have to make them work in all cases.

And, please IMDb, make the manipulation more obvious to the users so that they are aware.

NOTE:
Our rating mechanism has detected unusual voting activity on this title.
To preserve the reliability of our rating system,
an alternate weighting calculation has been applied.

Sat, Jun 12, 2021
review not posted
I submitted a review for a t.v. programme  " Ann Boleyn ",
and it was posted for a while, but then removed for no reason !
I did not receive any notification or reason .
I submitted a second and third review, but they are both still "pending"
and i have no idea what is going on .
I have reviewed many movies etc. and this is the first time for this.
I am very dissapointed.
https://community-imdb.sprinklr.com/conversations/data-issues-policy-discussions/review-not-posted/60c48dffc394d5731d055cd5

How come the movie has such a high average score since the detailed scoring as well as viewers reviews shows something completly different.

Note: This comment was created from a merged conversation originally titled Can U explain this

So I gave heard some bad things and opinions about Anne Boleyn show, almost mostly because she is played by a black actress.

Ok - that is really bad in case of a historic show, but not it's everything so I tried to watch first episode and it is in deed, really a total crap.

So I wanted to rate it accordingly and what I see?

What the hell?? For the last couple of months there's an ongoing plague of fake ratings, most new films are spammed with fake reviews like it's already "in the budget" to do so and now this? What is the point of this site by this point?? I mean really?!

why did you rate the whole show after 1 episode? why not rate the first episode?

Because the first episode is suppose to be the one showing how a series is.

Note: This comment was created from a merged conversation originally titled Anne Boleyn

To preserve the reliability of our rating system, an alternate weighting calculation has been applied.

So how did it make the rating reliable?

Ok, we can all agree that the fake votes are a problem, not only for movies that deserve a higher rating, but even more so for movies that don't have fake votes, but are just bad, and unanimously seen as bad. for example the genderswitch ghostbuster remake from 2016.

Ofcourse i dont claim to know more then the creators of IMBD, but having seen this steaming pile of shit, i fully understand people giving a 1 grade, and if the opinion of the people are not reflected in the grade, especially for controversial movies, that is problematic. In my experience some people give titles a fare grade, and another group, look at the grade of the movie, and either give it a 1 or a 10. for this person the grade is either to low, or to high, and want to make as much of an impact to the grade as possible to nuge it towards what they think is fair. This behavior is exelerated with titles such as the gender remake Ghostbusters movie. Basically for any title that has a strong pronounced statement that the viewer can take into consideration when grading, or for titles that are strongly connected to a real life statement giver, for example, I am Greta.

Greta is a strong voice in real life, and as the title is not fictive, the viewers opinion about her in real life, translates directly into the grade of the title. This, i think should be totally fine, especially for movies that has an clear statement, or an opinion, such as, I am Greta. If people don't agree with the opinions expressed, the viewer should be allowed to grade the title for that.

Living in Sweden, knowing the rough opinion of say 100 people in person, and a country as a whole, i would say that the grade given by the community of 4.7 for, I am Greta is accurate. However that 44.7 % think it is literally one of the worse movies they have seen,  seem unlikely, but the 20% 10 staring it is not believable either . It all averages out in my opinion. Going down the road of starting to censor grades that the authors of IMBD thinks reflects some unsavory opinion is a dangerous road to go down and endangers the integrity of the whole grading system itself. For obviously fakevoted titles, such as Gully, just reset the votes on those titles, and invest in some better ways of detecting fake votes. For the rest of your,

"NOTE: Our rating mechanism has detected unusual voting activity on this title. To preserve the reliability of our rating system, an alternate weighting calculation has been applied."

titles. Just show the actual grade voted on by the users. If a couple of fake votes gets in here and there, that is still a lesser evil than you artificially injecting, or removing  stars on titles that you think deserve less or more.

So to conclude this rant. Stop artificially changing the grades for any titles that is not obviously fake. Get better bot detection, and reset votes of titles such as Gully. There cant be a whole lot of them, and a dedicated group could probably do it in about a days work.. 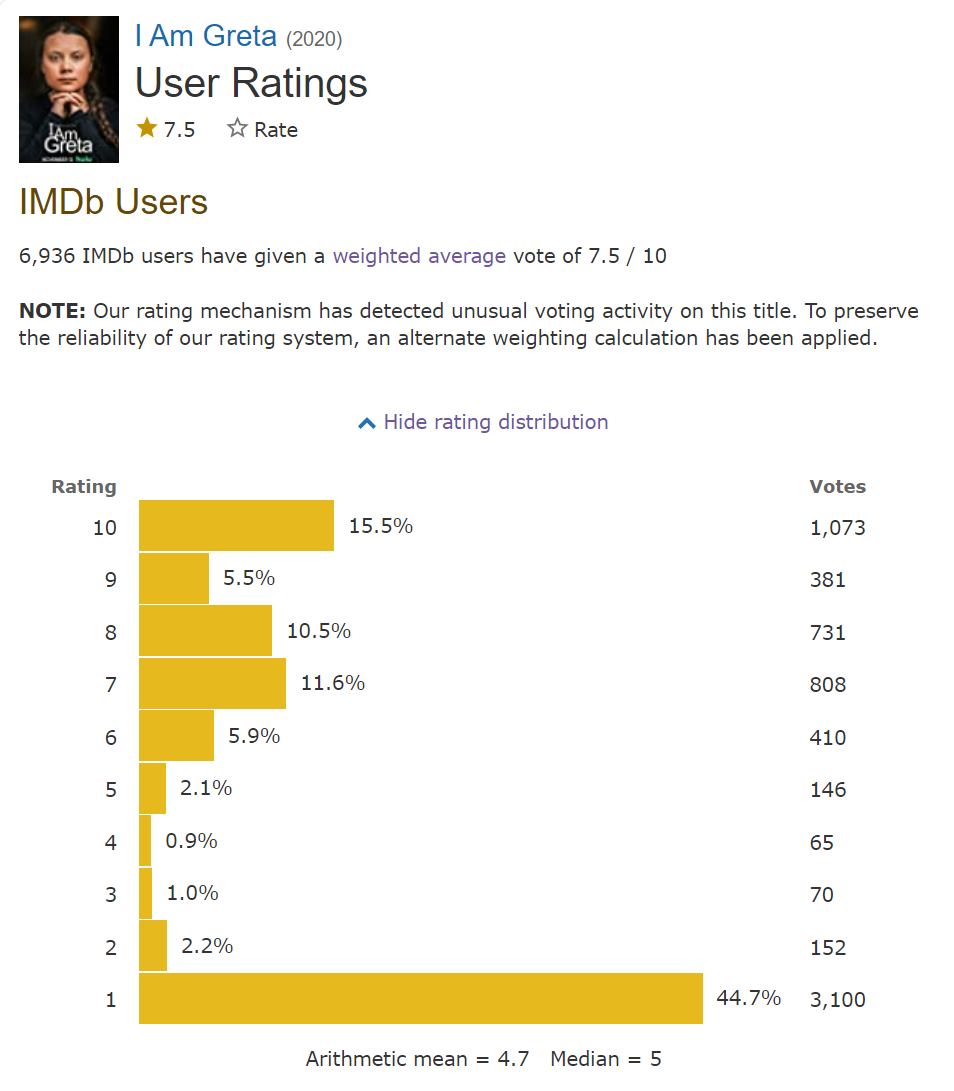 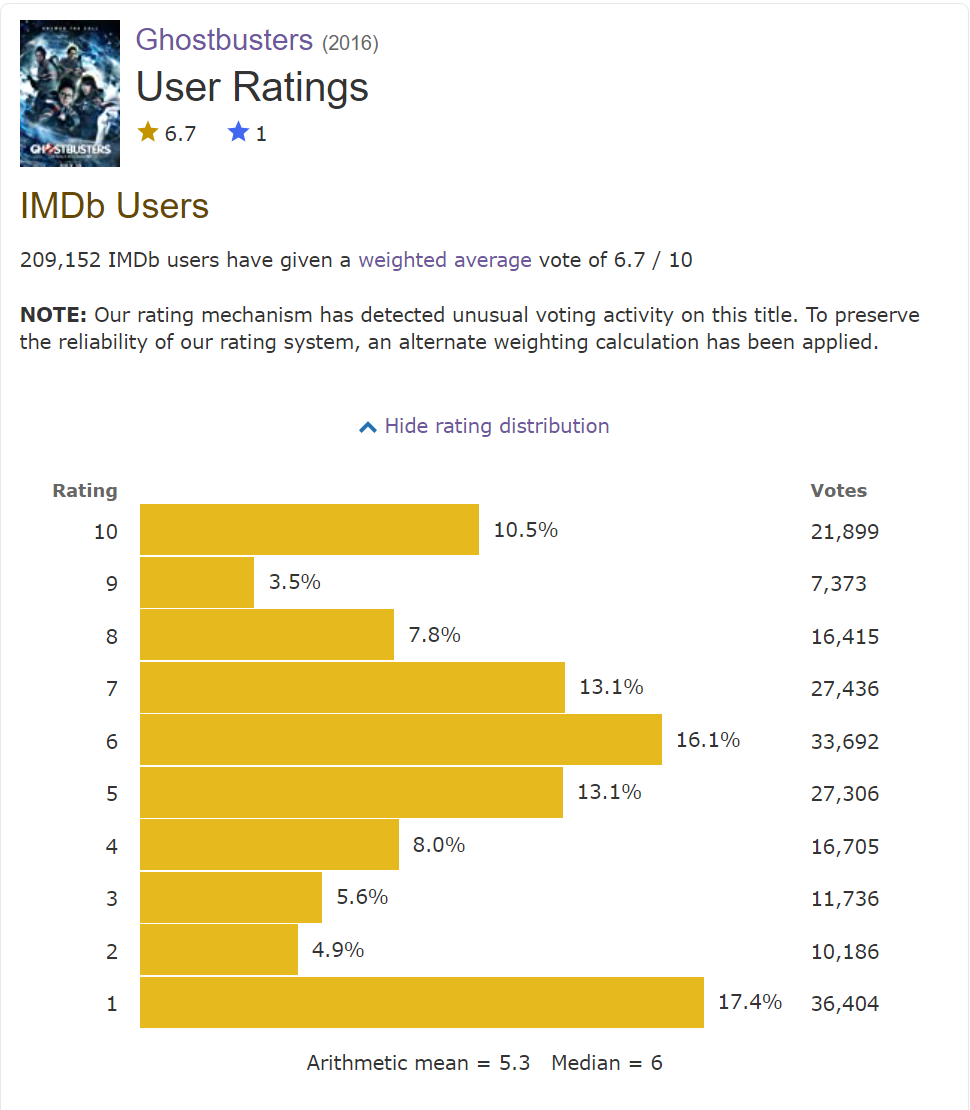