A really suspicious rating for a title

I wanted to write about a movie's rating, that is so strange, that they received attention from two of Hungary's bigger news portals, before I had time to write it down here. The movie is Pappa Pia (http://www.imdb.com/title/tt6609088/ ).

As the two articles were written 3 days ago, there have been changes in the movie's rating, because people who've read them rated the movie.

Now, I'd like to say, that I'm not writing this, to advertise how bad or good this movie is, and that I don't like, when people are bombing movies with votes, just to change the rating - which votes are in this case not different from the realistic (?), or let's say the original non US votes of the movie, so it's hard to determine who has really seen the film.

What I want to highlight is, that more than half of the 3.5 thousand voters is from the US, with an average of 8.9, which is strange, because this movie was only shown once in the States, at the Hungarian Film Festival of Los Angeles, and I couldn't find a word about it in English, only in Hungarian. This movie only exists in Hungarian language, and even on it's IMDb page has it only a Hungarian release date. So if ~1900 US user liked it so much, why isn't there a single review from one of them? 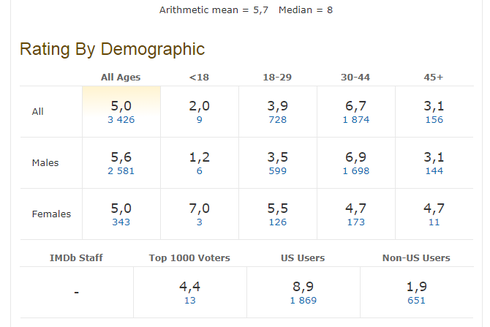 To have some context: Another movie only shown at last years Hungarian Film Festival was Kincsem, which also was released only in Hungary (and at the Ottawa European Union Film Festival, but that makes not much difference). It has 24 hundred votes, from which is only 46 from american users. 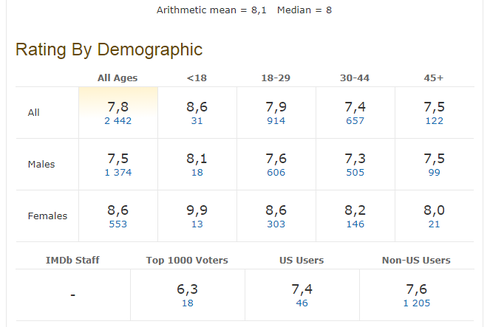 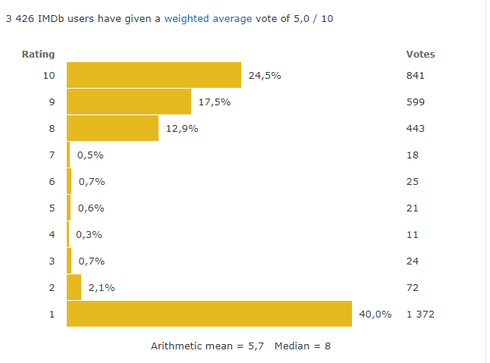 So in conclusion, I assume, that the creators of the movie bought votes for their movie, to make it's rating better, and that is said by the two articles linked. Is there a way to determine if there is something suspicious with those votes, or should I simply not trust IMDb ratings in the future?