On 20 March 2012, the Intouchables (2011) became the highest-grossing movie in a language other than English in the world. It eventually reached a worldwide box office of $426,588,510 and held the title for the next four years. In 2017, it was displaced from its top spot by a tsunami of home-grown Chinese language movies that topped its haul in box office receipts. However, the universally inspirational story has continued to spread it's story around the globe with adaptations in different languages. The story continues to sell tickets, albeit mostly through these worldly remake including its latest remakes, The Upside (2017) which debuted at #1 in 2019.

.Which worldly telling, inspired by the true story* of Philippe Pozzo di Borgo and Abdel Sellou, of the same story is your favorite version? *adapted from the autobiographical tale Le Second Souffle

The Upside 2017 | Movie English-language remake from the United States

See the partial list of worldly The Intouchables and its remakes here:https://www.imdb.com/list/ls045647005/The latest remake, Neil Burger's The Upside, starring Bryan Cranston, Kevin Hart and Nicole Kidman premiered at the 2017 Toronto International Film Festival. It is scheduled for a wide release in theaters on January 11, 2019 (USA). The Hindi-language remake from India, working titled, Mohit Suri's Next starring Saif Ali Khan and Varun Dhawan has been announced and is currently in-development.

Hmm, I haven't seen the other versions but I still go for the original Intouchables (2011).

The latest remake, Neil Burger's The Upside, starring Bryan Cranston, Kevin Hart and Nicole Kidman should be worth a look. It is hard to seeing it get a fair shake, being compared to a IMDb Top 50 Movie. Development (from Wikipedia)
In July 2011, in addition to acquiring distribution rights in English-speaking countries, Scandinavian countries and China, The Weinstein Company acquired the rights to remake The Intouchables in English. In June 2012, Paul Feig was slated to direct and write the script, with Chris Rock, Jamie Foxx and Idris Elba eyed for the role of Dell, Colin Firth in talks for Phillip, and Jessica Chastain and Michelle Williams were considered for a female lead.

By March 2013, Feig dropped out of directing, with Tom Shadyac in talks to replace him, and Chris Tucker was in consideration for Dell. In October 2014, Kevin Hart was cast as Dell, with Firth still attached as Phillip.

In March 2016, it was announced that Bryan Cranston was cast as Phillip, replacing Firth. Simon Curtis was to direct Cranston and Hart from a screenplay written by Feig.By August 2016, Curtis dropped out of directing. Neil Burger was announced as his replacement.[8] A script by Jon Hartmere will be used rather than Feig's work.

It would have been interesting to see some of these other writers, directors and actor in the roles.

The latest remake, Neil Burger's The Upside, starring Bryan Cranston, Kevin Hart and Nicole Kidman is scheduled for a wide release in theaters on January 11, 2019 (USA).

Why are these all under "Ideas"? With all due respect, your threads are fine, but please don't use the "Ideas" channel for these, as you're mis-tagging these threads, clogging up the channel with items that are not site improvement or feature related.
Can you move the tag to "Praise" channel, where they belong, please.
Regards.

There is no "Praise Channel" 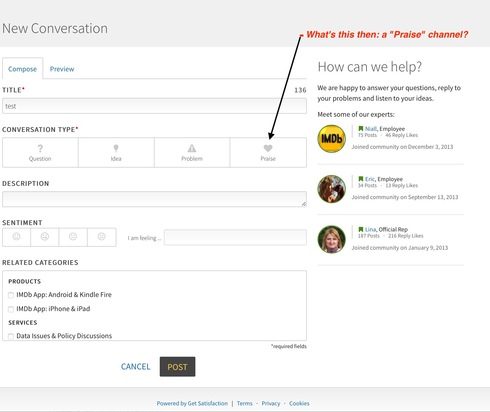 To stay on topic, this poll suggestion is very good as a way to know the similar movies, but for objective reasons it's close to be "one option" choice.